Reminiscence by the waterside: Book review of Jeevan Leela

Kaka Kalelkar
29 May, 2015 . 4 mins read
A collection of Kaka Kalelkar's thoughts, and snippets from his visits to rivers, ponds, tanks, pools and lakes across the country make one want to travel to these water wonders.

Water touches our lives in many ways. Our childhood memories are often entwined with the rivers that we have crossed, lakes that we have seen and the ponds that we may have jumped in. In his Bharat Darshan, the author Kaka Kalelkar travels across the length and breadth of the country and takes us to many such places we may have visited but have probably forgotten about. He writes about water and life and many a time, the lines blur.

Dattatreya Balkrushna Kalelkar (December,1885- August,1981), fondly known as Kaka Kalelkar, donned many hats. He was an independence activist, a Gandhian, social reformer, journalist and a voracious writer. He travelled across the country, mostly on foot, to understand people and their lives and brought forth voluminous travelogues. Honoured with the Padma Vibhushan in 1964, a commemorative stamp was also issued in his honour in 1985.

With a modern look and feel to his treks, he shares interesting folklores and stories, creating a water collage that sweeps across the country. His travel stories sprinkled with historical facts, long lost myths and personal experiences, all jostle for attention.

All in the family

Rivers are accepted as an extended part of Hindu families, mostly revered as a mother as in ‘Ganga-ma’. Then there are a few others – the Tamsa river, sister of the sage Vishwamitra, and Kalindi Yamuna, whose brother is Lord Yama himself. All rivers are also called ‘Sagar Patni’, as they all fall and merge into the sea.  River Markandi is so tiny, that to the author it seems more like a childhood friend. It chatters and blabbes away as it jumps and plays with stones and boulders en route, spilling over itself in a hurry to reach some place new.

What’s in a name? 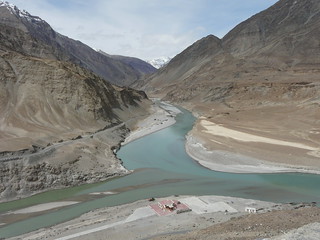 How does a river get its name? Why does it even need a name? What prompts the same river flowing through different regions to change character, change course and also change lives?

Since ancient times, rivers have marked geographical boundaries, evident in the names given to various regions. ‘Doaba’ (‘Do -ab’ literally means ‘two waters’) is the land between the Yamuna and the Ganga, while Punjab was known as ‘Saptsindhu’, the land of seven sacred rivers. Brahmins had family names that resonated with the rivers along which they lived -- the ‘Saraswats’ or ‘Gangaputra’ (sons of river Ganga). The river bank of the Sindhu was a place for breeding horses, and these horses were aptly names ‘Saindhav’. Many rivers are named after birds and animals -- the ‘Go-mati’ (cow), ‘Bag-mati’ (tiger) etc.

Every river has a story

The Markandi river derives its name from ‘Markandeya’, the son of a sage who overcame death and lives even today in the waters of this river. When two rivers meet, the smaller usually loses both its identity and name but that is not the case with the Mulha and Mutha rivers in Maharashtra, who quietly and peacefully merge together to retain their individual names, and emerge as a single entity, the Mulha-Mutha river.

As stories go, the Tungbhadra river was formed when Lord Vishnu in the form of a boar rested after rescuing the earth. Water flowed down from his tusks, mingled and formed the river. Renuka means sand, and many rivers are said to dry up under its curse. Ghatprabha and Malprabha, rivers of Karnataka, seem to have a 'farmers' nature, bountiful and a boon to cultivators along its banks.

The more time the author spends near the rivers, the more questions arise. Where does a river begin? Does it have an end? Why does it never stop, why does it never rest? It seems that the river was the first entity to be bitten by the travel bug. Constantly moving ahead, the river seems to mirror life, turning and twisting constantly.

What is it about flowing water that makes us want to take off our slippers and dip our toes in? What prompts us to cup our hands and sprinkle water on our closed eyelids even when the water seems unclean? Why do grown men and women turn into excited, squealing children once again? This book softly stirs up such emotions and makes you want to wear your walking shoes and travel to see these water wonders for yourself.

Download a copy of the book Jeevan Leela below.

India Water Portal acknowledges the support of Anupam Mishra in making this publication available to us.