India's dairy cooperatives today present a rare success story. This story is best represented by Amul which is today one of India's most trusted and loved brands, and also one of its most valuable, comprising a Rs.12,000 crore farmer-owned business. This extraordinary revolution was spearheaded by Verghese Kurien, who passed away on 09 September 2012. Tushaar Shah, who had the privilege of working with him for nearly two decades has written about this remarkable man in an article 'Remembering Verghese Kurien' published in the Economic & Political Weekly on 29 September 2012. 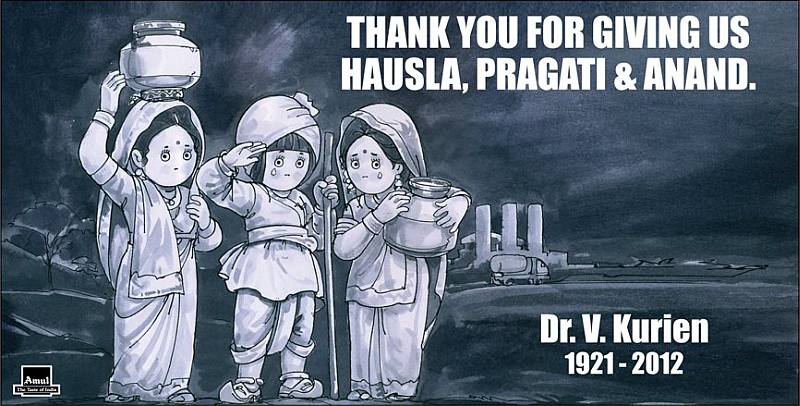 Tushaar Shah begins by stating that Kurien's legacy is in 'the institutions he built, the ideas he propounded, a dairy industry the country can be proud of, and a deep imprint on our thinking about development and democracy'before expounding on the various facets of his personality.

Man, manager, leader: This pays a warm tribute to Kurien's humour, dedication, sense of fairness, management skills, interpersonal skills, and his gift of inspiring others. Shah narrates several anecdotes that illustrate these characteristics and bring alive a man most others only know of through his acheivements alone.

Impact on Indian dairying: This section speaks of his success with the White revolution. Amul, the brand Kurien built, is today an organization of nearly three million small dairy producers with a total value of  Rs 12,000 crore. Amul pattern dairy cooperatives today operate a business of Rs 33,000-35,000 crore annually and are growing at a steady 12-15% annually. One of the reasons for this success is Kurien's campaigning to keep multinational dairy companies out of India till the fledgling national industry was stabilised.

Cooperative movement: Kurien strongly believed in the cooperative model, with the producer in full control of operations. He created a set of design principles for replicating the Amul model. These are:

Nation buiding: The many institutions built around the National Dairy Development Board owe their existence to Kurien and his goal of building a strong Indian dairy industry. He also founded the Institute of Rural Management at Anand (IRMA).

January 13, 2022
Water management in the times of Gonds of Central India
The water structures constructed during the time of the Gonds still continue to survive the test of time and provide evidence of the water wisdom of earlier times that is relevant even today.

January 9, 2022
Book review: Water conflicts and resistance
Issues and challenges in South Asia, a region where water sharing is more than a mere physical allocation of water