Author:
Manu Moudgil
Post By: Manu Moudgil
Posted Date: Sat, 2014-05-03 00:23
During the Green Revolution, Punjab became the biggest contributor to India's food basket but at a cost-groundwater decline. Can its farmers figure out a way to stem this and boost productivity?

Groundwater is falling by 1 metre every year

Many great civilisations have thrived near rivers with people moving in search of water across swathes of lands. The same holds true for present day Punjab, especially its farmers.

Ajaib Singh migrated to Bhawanigarh in Sangrur eight years back. He sold off 4 acres of his ancestral farmland at Sandharsi village in Patiala because it had turned less productive thanks to the groundwater level receding from 70-80 feet pre-1990s to 400 feet today.  “Even the water available at this depth is not good for irrigation. Those who can afford it, dig borewells at around 1,000 feet which yields good quality water,” he says.

Of the 138 blocks in the state, 81% are either overexploited or critical as far as groundwater is concerned. A major contributor to this situation is agriculture. Around 83% of the state is under agriculture and contributes 55% of wheat and 42% rice to the central pool. Around 30% of the land is irrigated by canals while tubewells take care of the remaining 70%. The number of tubewells in the state has gone up from 11,000 in the 1960s to around 13 lakh connections today with another 90,000 awaiting approval.

While tubewells offer more control and flexibility to a farmer than canals, they have resulted in a sorry state of affairs for the state's groundwater, which has been falling by up to one metre every year. Filling up of old dug wells and ponds across the state also compounded the problem as the recharge capacity of the land decreased.

According to the Department of Agriculture, there is a deficit of 1.41 million hectares per metre in the availability of irrigation water, which is met by groundwater. Free power provided for farming has further compounded the problem of groundwater exploitation. While the water might be free, the increasing cost of redigging a well and the expenditure on fuel during power cuts has made it a costly affair. 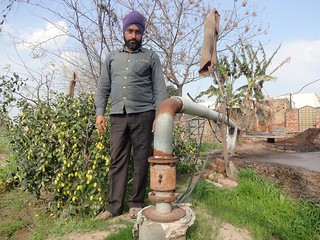 Farming takes it all

It was in the 1970s that Punjab began its drive towards ensuring self-sufficiency in food grain production. The Green Revolution introduced high yielding seed varieties, fertilizers and pesticides which were aptly supported by the expansion of irrigation networks. Increased availability of water led to the introduction of rice as one of the major crops in addition to wheat.

Traditionally grown only along rivers and canals, rice soon replaced cotton, maize and pulses as the main kharif crop. From around 3 lakh hectares in the 1960s, the area under rice has gone up to 28 lakh hectares now. The guaranteed procurement of rice and wheat for public distribution on minimum support prices was too tempting of an incentive for farmers to pass up. The development of better seeds as well as machinery specifically designed for these two crops, also helped push the rice-wheat cycle. The enterprising farmers took to new methods of cultivation and reaped higher gains, but didn't think long term.

The problem with rice cultivation

The conventional method of rice cultivation requires flood irrigation (730 mm per hectare) as it helps check the growth of weeds. Also, most of this water gets lost through evaporation because the puddling done before transplanting the rice seedlings hardens the upper soil preventing percolation. 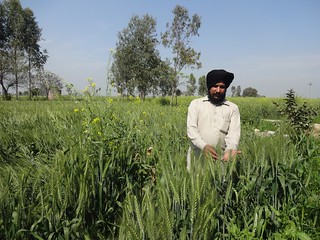 According to estimates of the Punjab Agriculture University (PAU), the area under paddy has to be reduced by 12 lakh hectares to avoid further depletion of groundwater. The state government has made several efforts in this regard pushing for crop diversification and a break in the wheat-paddy cycle but weaning farmers away from this lucrative crop rotation cycle isn't that easy.

While the government has been slow to wake up to the problem, Punjabi farmers also seem to have lost the enterprising skills they were once famous for. Today, the agriculture sector of the state is almost at par with various developed countries complete with the pros and cons.

Satinder Pal Singh, a farmer of Khug village near Jalandhar, sums it up very well: “Today, the proportion of farmers who work in their own fields is very less. This has ended the emotional connection between man and nature. Farmers are more concerned about their returns rather than ecological issues like saving groundwater for the future".

What the state government and experts are recommending now is shifting of plantation dates closer to the monsoon, which may help balance out net draft with net recharge. The Punjab Preservation of Sub-Soil Water Act enacted in 2009, disallows the transplantation of rice before June 10. Water-saving techniques to grow paddy like direct seed rice (DSR) cultivation and system of root intensification (SRI) are also being tried out.

DSR involves planting of seeds in rows at a specified distance. The fields need to be irrigated every week instead of being flooded continuously. “DSR is not only economical as it needs almost 70% less water and saves on labour, but it’s the most ecological way of growing rice. Since the field is not puddled, it promotes percolation of water. Ploughing also used to kill the earthworms which could have helped turn up the soil inside out increasing the circulation of oxygen,” Daler Singh says. The Punjab government and PAU started promoting DSR only in 2011. A subsidy of Rs 5,000 per hectare was given to farmers who adopted DSR with condition of no straw burning.

A major problem faced by farmers has been that of weeds as standing water helps curb weeds but that may soon be curbed with the entry of better weedicides. “Since weeds were never a problem in standing water, weedicides for paddy cultivation were rare. Now, the research and development in this field has picked up and new products are entering the market,” says Daler Singh. 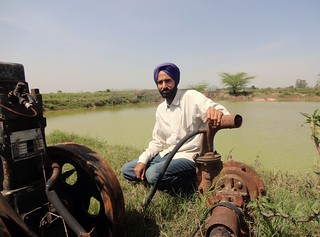 Baldev Singh of Talwandi Bhangeria in Moga district saves Rs 16,500 per acre through DSR. “The only requirement is to keep a watch on the weeds during the first month. The per acre yield I get from this technique is 2-3 quintals more than conventional methods which are costly and cumbersome. Earlier, we would use diesel worth Rs 10,000 per acre to draw out groundwater since power supply was erratic. Now, since weekly irrigation is required, we can afford to wait for the power supply. The labour cost of Rs 2,000 per acre is also saved,” he claims.

The success of Baldev Singh has inspired a lot more farmers to take up DSR and now around 250 acres of fields are cultivated using this technique in his village. Given the emerging issue of serious labour shortage in Punjab, these sorts of techniques could become much more popular. Though the technical knowledge about DSR is yet to reach the farmers, both the government and industry are keen to promote this as was evident at the recently held Punjab Agriculture Summit 2014. Various companies, including Pepsico, have come up with seed planters for direct-seeded cultivation.

SRI yet to make its mark

As far as SRI is concerned, it’s only concentrated in pockets of Gurdaspur district where Agriculture Development Officer Dr. Amrik Singh has been promoting it among local farmers. The technique involves wide-spaced plantation of younger seedlings in unpuddled fields. The fields are irrigated only after 4-5 days to maintain the soil moisture. “The wide-spacing ensures ample sunlight and air for the crop thus increasing the tiller and hence the per acre yield. The crop also withstands strong winds and floods as the stem is strong,” he says. Another advantage of SRI is that it does not require excessive use of chemical fertilzers and pesticides.

Kapil Vaid of Azadnagar village in Gurdaspur, who has been practising SRI on 2 acres for the last five years, has registered a 15-20% rise in per acre yield. “Initially, there was a problem with labourers as they found it more difficult to transplant younger seedlings. Also since weeds tend to grow it’s better to use SRI on smaller plots where weeds can be manually controlled. This crushed weed acts as manure thus reducing the need for fertilizers by half, which also reduces pest attacks thus requiring no pesticide usage,” he says. In states like Tamil Nadu where area under SRI is substantial, new machines have been introduced to help with plantation and weed control thus making the new cultivation technique easier.

The state government is trying to popularise drip and sprinkler irrigation besides the use of solar-powered water pumps but all these options are yet to meet the high expectations of the farmers here who are used to always getting the best in farm technology.

How people are coping

Though not very popular, some local solutions are emerging to reduce dependence on groundwater for irrigation. At Sandharsi village, around 12 farmers have dug ponds to harvest rainwater, which meets their irrigation needs. These ponds also act as buffers during floods. Another initiative is underway to take care of both the sewage and irrigation issues in one shot. This was made possible through the efforts of religious preacher Baba Seechewal and his followers who also revived the polluted Kali Bein rivulet.

At the town of Sultanpur Lodhi, the sewage treatment plant works through a sedimentation and decantation process. As dirty silt settles down at the bottom of the tank, water is diverted to the next reservoir. The dried silt is later used as manure in the fields while water is diverted to 500 acres of agricultural land through an 8-km long underground pipeline. This provides the last link to the cycle of production, consumption and regeneration.

Around 72 farmers are using the recycled grey water, which was earlier dumped into the Kali Bein rivulet. “Initially, there was a lot of apprehension among farmers but seeing the results, they began to trust us. Since we are also offering the labour to lay down the pipeline for free, more farmers now want their fields to be on the supply line,” explains Satnam Singh, one of the various karsewaks at Baba Seechewal's Nirmal Kuteya ashram. 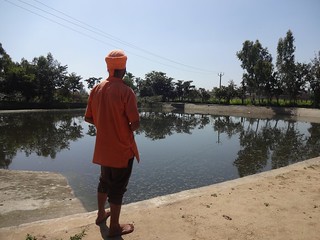 At Seechewal village, which was the first one to work on this concept, the sewage water irrigates around 5 acres of fields owned by the Village Panchayat. Starting from there, around 30 villages in the area have now got tanks and ponds, which collect the waste for treatment and route it towards farms.

“When there was no tapped water and sewerage system, people used to defecate in the fields. In fact, if the planners had incorporated this idea into the modern sewerage system, we would not be facing such a huge problem of waste disposal,” says Baba Seechewal. Though the water is not enough to irrigate large areas, it definitely relieves the pressure on groundwater.

Lessons can also be drawn from the work of Sankalpa Rural Development Society (SRDS), which has been training farmers in Karnataka to revive defunct borewells. Tiny slits are made into the casing pipe of a tubewell around which a pit is excavated. The pit gets water from an adjoining pond which enters the casing pipe through the slits thus proceeding to replenish the aquifers. Such instances, though on a small scale, offer hope as they are easier to replicate.

Forty years ago, the farmers of Punjab took up the challenge of feeding the nation. That got us food but destroyed the area's ecology. Can they now meet the challenge of restoring the ecology without disturbing the food basket?

April 13, 2021
Swacchagrahis: The frontline workers of India's largest sanitation program
There is a need for long term sustained engagement of the skilled workforce for water and sanitation

April 8, 2021
Conservation of water commons through community fishery
The village institution collectively framed rules for the governance and management of these water commons

April 6, 2021
Drinking water access to all in Bihar: Reach, benefits and challenges
Significantly reduced the daily drudgery of women in rural areas