Usha Dewani
19 Sep, 2016 . 8 mins read
Most of the ponds in Guwahati are in a sorry state now. They need to be preserved, not just as heritage sites, but also as drinking water providers and collectors of surface runoff.

Guwahati, one of the fastest growing cities in India, is thousands of years old. Once known as Pragjyotishpura or the city of eastern light, Guwahati has many ancient stories attached to it. This beautiful city finds mention in epics such as Ramayana, Mahabharata and the Puranas. Guwahati served as the capital of the Kamrupa kingdom and continued as the capital city of Assam till the 10-11th century AD under the Pala dynasty. In the mediaeval times (12-15th century), however, the city functioned as a strategic outpost of the Koch Hajo and Ahom kingdoms of western and eastern Assam.

Central to its existence are several ponds and tanks built at different time periods. Most of these ponds, built by kings, were constructed as acts of piety or service to the people. Not only were these ponds used for rituals, but they also supported a large community in the vicinity of the temples they were built in.

There were a number of ponds and tanks in the city that came up at different times and held tremendous importance. Thanks to the apathy of the government and the public, many of these ponds have succumbed to encroachment. Localities such as Durgasarobar near the Kamakhya temple and the Ganesh temple in Ganeshguri area once had tanks or ponds that have now disappeared.

Communities that grew around the ponds

According to eminent Assamese writer and historian, Kumudeswar Hazarika, there were about 300 tanks in Guwahati and North Guwahati when the two were a single entity until the British occupied Assam in 1893 and people used to drink water from them. A majority of them, however, were filled up by the British as they deemed the water unsuitable for drinking. Some ponds like Dighalipukhuri, Paltan Pukhuri, Kamarpatty Pukhuri, Padum Pukhuriat Karnachal, Majinder Pukhuri (also known as Panbazar Padum Pukhuri) and the Padum Pukhuriat the Uzanbazar Oriya Basti, lived on.

Temple ponds were used for ritual bathing before entering the temple and also for drinking. Hence, it was customary to build tanks alongside temples when they were being built. Also, once a temple was built, a large community of cleaners, gardeners, etc grew around it. “Areas like Maligaon (gardeners), Adabari (ginger-growers), Jalukbari (pepper-growers) came up around the Kamakhya temple and one can find tanks on the Kamakhya Hill which were presumably built for the requirements of this community,” remarks Dr Paromita Das, head of the history department, Gauhati University.

According to her, even though the inscriptions in many of these temples such as the Navagraha, Sukreshwar, Monikarneshwar, Ashwaklanta, Dirgheshwari and Umananda temples in Guwahati say that those were built by the Ahoms (the longest ruling dynasty in Assam from 1228 to 1826 AD), the archaeological remains suggest that those were built over the ruins of the existing pre-Ahom temples of the Pala or Koch period, identified as sacred sites. However, it is difficult to say this for the tanks due to the scanty literature of the pre-Ahom period. Also, to date the origin of these tanks is a challenge.

During the Ahom period, a special class of officers called mati seleka bixoya (soil-testers) performed rituals and observed several factors such as the direction of the wind and tasted the soil to locate the natural aquifers underground for building these tanks. Such understanding of local geology may perhaps be the reason that many of these ponds still have water all round the year, she explains.

Rich biodiversity of the tanks

Many of the temple tanks in the city are home to rich biodiversity. Out of the 29 species of turtles identified in India, 20 are found in Assam and 12 such species including some threatened species and the black soft-shelled turtle which has been categorised as extinct in the wild by Internatonal Union for Conservation of Nature (IUCN) thrive in the city’s temple tanks.

Building ponds or tanks has always been a part of the culture and tradition of Assam even though the state is mostly an alluvial plain with plentiful network of rivers that provide people with sufficient water. Also, areas that have perennial rivers and face regular flooding see huge number of such water bodies. Tanks or ponds were built for several purposes--for drinking water, irrigation, rituals, beautification, to memorialise an event, protect biodiversity and community fishing. According to the Department of Environment & Forests, Assam, there are an estimated 1,85,623 ponds and tanks in the state. This perhaps talks about the lifestyle of Assamese people where water bodies play a crucial role. Building ponds was not just a prerogative of the royalty, even an ordinary Assamese builds his house with mud excavated from the pond while its water would be used for drinking, washing, bathing, kitchen garden and fishing.

The water in these tanks or ponds in the city are no longer used for drinking. For a city like Guwahati, however, these water bodies mean much more. They are unavoidable in that they help control water loss during rainfall and maintain groundwater level. These tanks play a critical role in maintaining surface water repositories of the city. These surface water bodies sustain water flow dynamics between the highland and the lowland of the city’s landscape, function as storm water reservoir and act as potential sites for natural recharge of the sub-surface water. 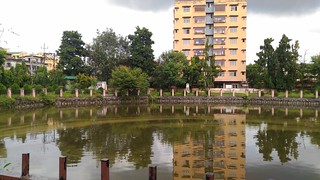 A majority of the tanks in Guwahati have some historical connection--either recorded or oral. These are testimonies to different stages of development of the city of Guwahati. Few of them, like Dighalipukhuri, have been maintained, but most of them are in a very bad shape. The common problems with these tanks are polluted water, dumping of waste, erosion, boundary walls made of concrete and most importantly, negligence," asserts Dr Manjil Hazarika, assistant professor, department of archaeology, Cotton College State University Guwahati, India.

Here are some of the well known ponds in Guwahati:

Dighalipukhuri, literally ‘long pond’ in Assamese, is an elongated pond believed to have been dug by Bhagadatta (son of Narakasura), the king of Pragjyotishpura. The pond was connected to the Brahmaputra in the north and to Solabeel wetland in the south by a channel that was filled up for the Guwahati railway station, high court and other infrastructure. 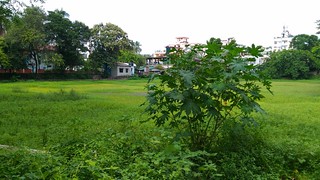 Jorpukhuri, the erstwhile Ugratara temple pond, is said to be built by Swargadeo Siva Singha in the service of the temple. This was also connected to the Brahmaputra through the Naojan channel used by the kings and nobles for commuting to the temple. Sadly, it has turned into a sewage carrier now. The British constructed a road in the middle of the pond, dividing it into two, and earning it the name Jorpukhuri, meaning twin ponds.

Nagputa/Nagkata Pukhuri is said to be one of the oldest ponds in the city. It is very often filled with weeds and is hardly visible.

Dr Neel Kamal Das, a city-based environmentalist emphasises on groundwater recharge as one of the main ecological services any water body like a pond or wetland delivers. “Ponds are significant recharge areas. Studies have revealed that groundwater level in the vicinity of these ponds was usually higher than the other areas of the city," he explains.

Again, due to over extraction, groundwater levels have lowered and exposed some rocks resulting in arsenic and fluoride contamination in some pockets of the city. “Had there been more surface water bodies such as ponds around or the existing ones were preserved, the situation would have been different,” says Das. Also, the government of Assam, with support from different agencies, is gearing up to provide water 24x7 to all its citizens. “These ponds could also be revived to supply water to nearby localities and since there is enough rainfall, the ponds would get replenished even after extraction. These could also be used to serve as spaces to collect rainwater and surface runoff,” he adds.

The increase in population and the sprawling urban areas are choking many of these city ponds. Also, general callousness of the people dumping plastic and other waste into the ponds has deteriorated their condition further. Once a favorite space for taking a stroll around, these ponds are now avoided by many.

“Actually, the present day Guwahati was never developed in a planned way. So, water bodies have to pay the price for this mindless development. Most often, their ecological significance is not taken into consideration; the coming up of the Jalukbari area in the city being the latest example,” remarks Dr Rajiv Dutta Choudhury of the State Disaster Management Authority.

Several measures can be taken to alleviate these problems. “Proper documentation of each and every tank along with measures to maintain the ponds like cleaning the water, stopping the erosion of the boundary and strict laws to prevent damage to the tanks and developing these to become tourist 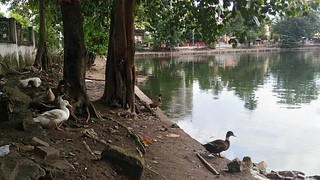 spots, if suitable. Simply tagging the tanks as ‘heritage properties’ would not help much, but strategic planning and efficient management by private, public and/or government authorities would help the tanks to survive for many years to come,” Hazarika explains.

Most preservation efforts are limited to beautification by concretising the banks of ponds which affects the pond’s ecology and quality. “The concerned authorities only take engineering into consideration and do not consult an environmentalist, or zoologist or a botanist when planning to protect such water bodies. A multidisciplinary approach, that looks at not just the engineering part of it but also the ecological value of these ponds in the long run, is the need of the hour,” Das suggests.