The pond with a purpose

Chicu Lokgariwar
21 Feb, 2015 . 4 mins read
The residents of Gobariya village built two ponds for livestock rearing and horticulture, but a chance discovery led to them becoming a quicker and better income generator.

Celebrating the pond at Gobaria

The Bhuiyas, a group of people who belong to the Scheduled Castes in Jharkhand and Bihar, have historically been landless foragers -- a fact reflected in their name which means 'of the earth'. During the Bhoodaan movement, a group of Bhuiyas received a small amount of land on the Chhota Nagpur plateau near Gaya. Sadly, as often proved to be the case, this land turned out to be inferior.

Gobariya, as the village is now known, is situated on a stony, dry and treeless area. The rainfall, though adequate, does not stay on the land leaving it dry shortly after a downpour. The two handpumps in the village yield barely enough water for drinking and domestic use. Even if they had once tilled the land, they would've just about scraped out a living. As it stands, they work as daily labourers.

This was the situation  when the Pathaks visited the village.

Promila and Ravindra Pathak are the founders of Magadh Jal Jamaat, a network of people working on water issues in Bihar. In Gobariya, the villagers told them that they had no place to water their cattle. Standing on that barren flat, the Pathaks had a vision of the Chhota Nagpur plateau as it once was -- an area dotted with small and large ponds, lowing cattle drunk from its waters and resting in the shade of fruit orchards. They wanted to make this  vision a reality and realised that the first step to make this happen would be the to construct a pond.

The Magadh Jal Jamaat does not have much funding. They rely to a small extent on odd contributions made by friends, and to a much larger extent on the enthusiastic participation of the people they are trying to help, no matter how poor. It was the same in Gobariya. The people of the village depended on daily wages -- the chulha in their homes would not be lit on the days that they did not find work. The Jal Jamaat and the people of Gobariya negotiated a solution that would serve both groups. Work on the ponds would be carried out on Saturday and Sunday, allowing them the week to earn wages. On the weekends, the Jal Jamaat would provide materials for a cooked meal for the village. 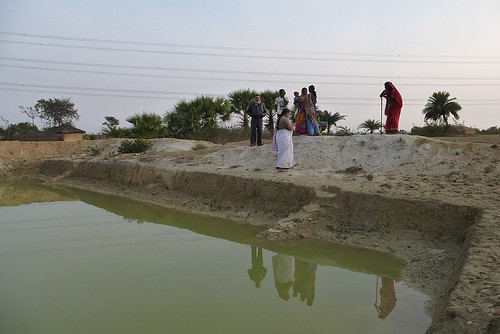 Per this plan, work commenced. It took more than a year to complete construction thanks to interruptions during the monsoons but after it was built, the villagers speedily excavated another. At the end  of it, two stepped ponds about 10 feet deep and 20 feet on each side were built entirely by manual labour. During this time, the purpose of the pond was also negotiated.

Who is the pond for?

Initially of course, the ponds were designed for livestock in the manner of traditional farm ponds. A small stream was to be  diverted into the ponds; on the diagonally opposite corner an outlet was to be placed. A gentle slope on one side would allow cattle to approach the water and sate their thirst.

The discovery of a spring that seeped water into the pond drastically changed these plans. Instead of providing an inlet into the ponds, the villagers excavated a shallow moat to divert runoff away from the pond. This had the twin effect of both protecting the embankment and also protecting the cleanliness of the collected water. Now what would call for a clean and protected pond? The people of Khobariya had a plan for the ponds that would generate income much faster than the earlier plan of livestock rearing and horticulture. 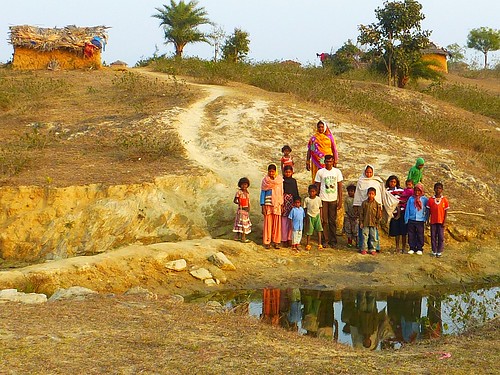 They went about it in a remarkably democratic  manner. Each household contributed to the extent that they could afford. A total of 2000 fishlings were purchased, at the rate of Rs. 2 each. Lakhan informed us that each fish will weigh 2-3 kg when adult and that they will retail at approximately Rs. 200 a kilo. Thus the total harvest will yield a gross income of Rs. 10 lakh against an initial investment of Rs. 4,000. The villagers have kept records of who contributed how much, and plan to distribute the earnings in the same ratio. Even after allowing for overheads such as transport, it is a profitable investment.

They have now decided that they will create a small bund across the one stream that flows through their area. Small channels will convert the arid  lands to irrigated fields but first, they will deepen the ponds, and maybe construct a couple of more ponds. And why wouldn't they!