Get drenched in the Himalayas!

Manu Moudgil
05 Mar, 2015 . 4 mins read
Bhagsunag Falls in McLeod Ganj, Sahastradhara in Dehradun, and Kempty Falls near Mussoorie have long histories. We give you the the full lowdown, tips on what to do and how to get there.

Culture, recreation, and geology are some of the reasons people cite for visiting the Himalayas. You can literally get drenched in these topics in some of the waterfalls that the Northern Himalayas are home to. Read on to get the full scoop on places you can (and should!) visit. For the geeks among you, we have also explored a bit of the history and science behind it.

McLeod Ganj, Dharamsala, offers a rare transnational set up in the hills. While it is a capital of the Tibetan government in exile, the place has a sizeable Indian and Israeli population with a sprinkling of Europeans and Americans as well. A range of cafes, meditation centres, cooking and language classes besides nature trails, make this town a tourist hotspot. It is full of mythological tales, the most prominent of which takes you to a Lord Shiva temple at Bhagsunag around 2km away, which is linked to a fight between Raja Bhagsu and Nag devta (Lord of snakes).

Raja Bhagsu wanted to bring water to his drought-affected people. After a long search he reached the Nag devta's sacred lake, which was at a height of 18000 feet! Using magic, he filled the lake’s water in a small vessel to take back to his people but before he could do that, the devta who had learned about what the king had done, challenged him to a fight. Although the king was defeated, the devta mercifully spared him and also granted him a boon -- that the spot will be known by their joint name ‘Bhagsunag’. 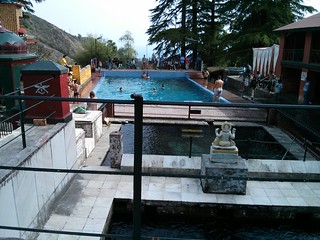 There is a spring near the temple, and a swimming pool has been constructed at the spot for devotees to take a dip. A trek further up takes you to the waterfall, which is believed to be the spot where the king's vessel of water fell. Rows of Buddhist prayer flags further enhance the spot's spiritual quotient.

Relax on the side of the waterfall or the stream downhill while enjoying a steaming cup of tea and a bowl of 'Maggi'!

McLeod Ganj is around 10km from Dharamshala, which is connected to Delhi and other cities via road. Bhagsunag is 2km away from the town.

Even the weakest of noses will pick up the pungent smell of the water at Sahastradhara. Literally meaning “a thousand springs”, Sahastradhara is a quaint little destination near Dehradun where you can get many a geology lesson. 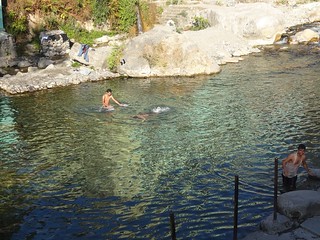 is surrounded by mountains full of caves formed due to the erosion of limestone rocks by water. Large hollow cavities have formed over millions of years as the water continues to drip through cave roofs. It is believed that Dronacharya, the teacher of the Pandavas, meditated in one of these!

Visitors bathe in the spring water, which apparently helps treat common skin ailments. The pungent smell is due to a chemical reaction, which converts dissolved sulphur into hydrogen sulphide. Devotees throng the ancient Shiva temple on the hill top that overlooks the water tank. A small marketplace surrounding the bathing spot offers a good variety of food and souvenirs to take home.

Sahastradhara is at about 11km from Dehradun, which is connected to all major cities via Delhi and Haridwar.

Kempty Falls, located at a height of 4,500 feet, was developed around 1835 by British officer John Mekinan. Around 15km away from Mussoorie in 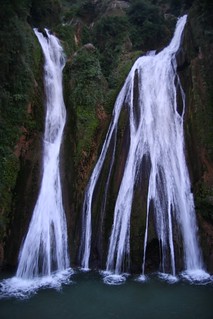 Uttarakhand, the Falls probably got its name from British officers holding a camp here to have tea parties.

This is a tourist hotspot for those visiting Dehradun and Mussoorie, evident from the large number of hotels, shops and resorts functioning here. The main spot, which had boulders and rocks, has now been renovated using tiles and concrete to make it easier for tourists to take a dip. While more accessible and possibly safer, it has taken away from the natural settings of a fall.

Smaller pools of water have been created downhill to enable boat rides. The Falls are so popular that it even has a postage stamp dedicated to it from 2003.

Kempty Falls is around 43km from Dehradun, which is connected to major cities via Delhi and Haridwar.