Rice occupies 95 percent of the total food grain production in Assam. The state has about 2.5 million hectares area under rice cultivation with the crop occupying about two-third of the total cropped area in the state.

It is that time of the year when the empty granaries wait for the maturing paddy to fill them. Kati Bihu or Kongali Bihu (Kongal means poor while Kati is the Assamese seventh month where farmers await their harvest) is the most placid of the three Bihus (Assamese agriculture festival) celebrated without much pomp or splendour. On the evening of Kati Bihu, earthen lamps are lit at many places including the foot of the household tulsi plant, the granary, the garden and the paddy fields to protect the paddy, with rowa-khowa chants and spells to keep pests, rodents and evil eye at bay. Alas! For many farmers in Assam, Kati Bihu this year has lost its essence for their paddy has been destroyed many times over by repeated waves of floods, followed by a severe pest attack.

If floods weren’t enough peril, farmers in Assam are haunted by an uninvited guest--the paddy-swarming caterpillar or the army caterpillar--affecting 30,204 hectares of the Kharif crop in 22 districts of the state. Floods, followed by a prolonged dry spell, provided congenial conditions for the pest’s growth. Experts believe shifting from traditional farming practices as one of the primary reasons for this situation.

Rice occupies 95 percent of the total food grain production in Assam. The state has about 2.5 million hectares area under rice cultivation with the crop occupying about two-third of the total cropped area in the state. Traditionally, paddy in Assam is grown throughout the year in three seasons--winter (known as Sali crop), autumn (Ahu) and summer (Boro)--with the majority, about 70 percent, being cultivated during the Sali season. 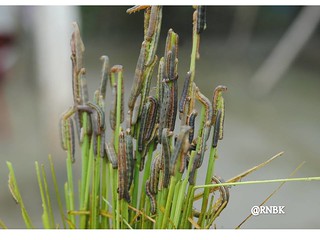 In Assam, paddy this year has been attacked by two species of swarming caterpillar--Spodoptera mauritia and Spodoptera litura. Spodoptera mauritia is a sporadic pest that attacks paddy and some specific types of grasses while the latter is a regular pest and does attack castor, okra, tomato, crucifers, colocasia and others crops, besides paddy. “This year, there was heavy rainfall during June-July months followed by a dry spell which was again followed by showers in a few weeks. That kind of weather is very conducive for the growth of this pest,” says Dr Dilip Kumar Saikia, principal scientist at the department of entomology, Assam Agriculture University, Jorhat.

Swarming caterpillar is a nocturnal pest; it becomes active in the night while hiding in the cracks and crevices in the soil, making it difficult for the farmers to spot the damage in the initial stages. This year, due to excess rainfall inundating the fields, the pests did not have a place to hide and appeared on the plant. “They are very gregarious in nature, we have seen even 50-60 larvae in a single rice plant this year,” Dr Saikia notes.

During May, June and July, mean day-time temperature was below normal and the night temperature was above normal, resulting in the lowering of the diurnal temperature range (DTR). Low DTR might also have helped the pest favourably, in addition to the excess deficit rainfall, explains Dr Rajib Lochan Deka, department of agrometerology, Assam Agriculture University, Jorhat. He says this is not related to climate change. “Most places of Assam received above normal rainfall in the months of May, June and July, 2016. Rainfall during the month of August was deficient in almost all places in the state. Again in the month of September, rainfall distribution was normal. This erratic behaviour of rainfall during monsoon season is quite natural and not unusual in Assam,” he adds.

“This year, the rainfall also came much earlier. Even the seedlings were under water for most of the time before transplantation. This may also have contributed to the problem,” says Luit Saikia, a farmer from Chekuria village in Titabar, Jorhat who had about five bighas of his paddy cultivation under the swarming-caterpillar attack. Similar attacks by these caterpillars were also reported during the 1960s, 1970s and 1990s from Sibsagar and Dibrugarh districts in Assam. This year, however, the attack has taken an epidemic form. 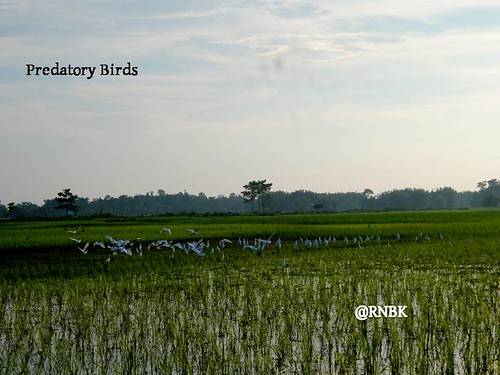 There is a shift in the way farming is carried out today and is a major contributing factor to the kind of damage caused to the crop, experts say. They say that farmers do not monitor their fields regularly after planting like they used to do earlier which could prevent much of the damage by any pest.

Mechanisation of farming has also brought about some changes. “Earlier, when people used to manually plough the fields with the help of cattle, it exposed the hibernating pests to predating birds and weeds were also destroyed. But nowadays, fields are being prepared in a very short duration due to limited availability of tractors and power-tillers in a given time and hence pests and weeds are not destroyed completely,” comments Rudra Narayan Borkakati of the department of entomology, Assam Agriculture University. Earlier, the ploughing would begin around mid-April and transplanting around July, so there was a long interval between the two. But now, many farmers prepare the field within just three to four days in July and transplant immediately thereafter, he explains.

“This year, floods also delayed the transplanting in many areas--one of the main reasons for the pest attack,” Dr Saikia says.

Dr Saikia adds that practices like plastering the bunds with clay soil were useful as they deprived the pests of their breeding space. He asserts that while mechanisation is imperative, one should plan the activities beforehand.

What can be done?

Scientists have recommended proper use of prescribed insecticides to deal with the problem along with dust treatment on the bunds in fields to prevent the proliferation from one field to another. “However, Spodoptera litura has already developed resistance to insecticides as it is a regular pest on vegetables and farmers have been relying on these chemicals steadily for long. Hence, it is difficult to control proliferation of S. litura with insecticides,” adds Saikia.

“Along with this, as a long-term measure, a clean cultivation free from weeds is imperative. Weeds in the field provide food to this pest. It has also been found that the swarming caterpillars generally lay their eggs on the weeds,” says Borkakati.

Following an integrated approach, where the services of other animals and insects are utilised in farming, can go a long way in preventing such losses in the future. “It is true that high incidence of this pest is due to variable weather and wrong practices. The farmers have to take preventive care based on weather conditions and incorporate cultural control,” says G.V. Ramanjaneyulu, expert on integrated farming and executive director at Centre for Sustainable Agriculture, Hyderabad. He recommends the following cultural and mechanical control measures to deal with the problem: