Amita Bhaduri
23 Mar, 2014 . 4 mins read
Implementing rooftop rainwater harvesting, treating the catchment and building a community water tank are some reasons why Patkhori village is starting to sail through its water crisis.

Mewat, a historical region comprising of the present Mewat district of Haryana and parts of Alwar, Bharatpur and Dholpur districts of Rajasthan, lies in a semi-arid belt. It experiences variable rainfall annually and receives, on average, 336 mm to 540 mm, as per the Mewat Development Agency.

View Patkhori in a larger map

Some 30% of the households own wells or tube wells in the region. It is not surprising that well-off farmers have begun consolidating their lands in the freshwater zones near the ridges and foothills. Water from the borewells from these patches is taken kilometers away through pipes for irrigation. During drought, many villages wait for their supply of water through tankers but the larger problem is that there is a gradual spreading out of the saline zone.

Finding solutions to the problem of salinity

With help from the S M Sehgal Foundation, a Gurgaon based NGO, people of Patkhori village adopted certain conservation practices to tide over the prevailing water shortage.

People in the area took up steps ranging from constructing check dams to developing rooftop rainwater harvesting systems in the school. Although these steps aren't enough to meet the overall water demand of the region, locals feel that the small gains through the S M Sehgal Foundation (3) promoted initiatives help them tide over the crisis to a considerable extent. People say that all this has helped reverse salinisation of wells and some of them are indeed yielding sweet water now. 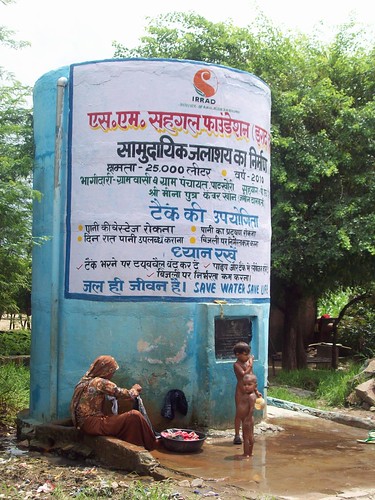 Hari Bhagwan, S M Sehgal Foundation, explains how the 646 households in the village got together to construct a community water tank in the village to address the drinking water problem. While Meena ji, a local farmer donated his land for the community effort, S M Sehgal Foundation goaded the local Health Engineering Department to pay for the pipeline, which was a major chunk of the cost.

The problem of erratic water supply was tackled now that the community had a 25,000-litre tank for storing water. The tank has five outlets from where about 200 households of the village take turns to collect water. Fights for water have reduced now.

In Patkhori, the community revived abandoned wells and converted them into recharge wells. Eleven such recharge structures were developed in the village and according to Hari Bhagwan, these wells are able to collect a vast amount of water flowing down the catchment. 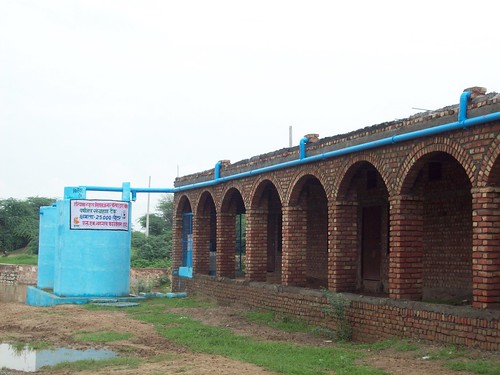 The structure is shaped like an inverted filter where the incoming water is passed through a four foot deep and four foot diameter chamber. The chamber has boulders, pebbles and sand for arresting the suspended solids in the water. The water from this is then diverted to an abandoned dug well, which is now being used as a recharge well. The water percolates into the ground from the sides as well as the bottom. Farmers indicate a rise in water levels up to five feet because of the structures.

The condition of this school, like most other rural schools in the district, was abysmal. "Water and toilets facilities were inadequate", says Arti Manchanda of S M Sehgal Foundation.

The school's 8000 litre capacity water tank only held water for about a month. After that, it had to be refilled by tankers that costed Rs. 100-120 per kilolitre. Due to this, there was no water for the toilets. The dropout rates of girls in particular is very high and the lack of sanitation facilities was a big contributor. 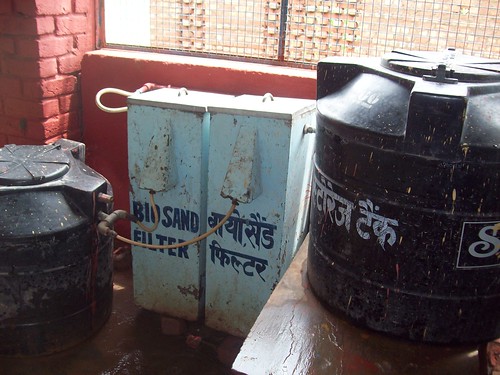 The school has now been provided with a rooftop rainwater harvesting system. The water passes through various stages of filtration and includes bio-sand filters to remove the bacteriological contamination apart from the suspended impurities. Tests have been done that confirm that the water from the system is suitable for drinking. Now, the school has water year-round. "There are separate toilet blocks for girls and boys now and water-borne diseases have decreased", says Hari Bhagwan of S M Sehgal Foundation.

As Mewat reels under the water crisis induced by salinity, the solutions implemented by the people of Patkhori be it catchment treatment, rooftop rainwater harvesting or building of a community water tank could very well hold the key to water security for the villages of the region.

(3) S M Sehgal Foundation works on improving the availability of water by “building structures to collect the runoff from large catchment areas located uphill in Aravalis to recharge the fresh groundwater pockets”.