Shivaji Thorat
Sabita Kaushal
13 Apr, 2015 . 4 mins read
Have a glimpse at how water, food and natural defense were an integral part of this fort built in the Sahyadri mountains, northwest of Kolhapur, Maharashtra.

Chhatrapati Shivaji was the brave warrior king whose name is still synonymous with Maharashtra. A military genius par excellence, he launched guerrilla warfare (ambushes, surprise raids, and hit & run tactics) against the numerically superior but inert, traditional Mughal forces. To build on his speed, surprise & manoeuvrability, he constructed or repaired strategically placed forts across the rugged crest of the Western Ghats. One such magnificence is the Panhalgarh Fort (Panhala literally means 'home of serpents' and garh is ‘fort’), 20 km northwest of Kolhapur, Maharashtra.

A winding road slopes gently upwards to reach a stone fortification that towers across the landscape. Perched right at the edge of the hills are the ramparts of this fort. Giving a birds eye view to the open area around it, a steep precipice barely hangs from one end of the fort, while the other side is strengthened by massive stone walls that rise imposingly, in an enviable condition even today. 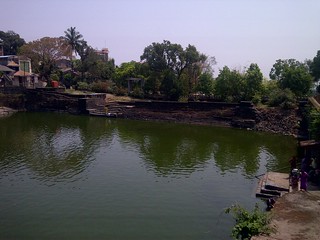 Believed to have been built in the late 12th century, the Panhalgarh fort was of strategic importance as it guarded the principal route through the Western Ghats. To defend itself against the enemy or long sieges during war, it stands simple and austere, a testimony to the tough times. The walls here are build of huge, gargantuan pieces of stone, mortared with lime and melted lead for increased strength and durability.

An existing entrance to the west is the impressive ‘teen darwaja’ ( three doors), which depicts a carving of a large tiger pinning down an elephant, and has 3 double walled gates to protect the fort entrance. The eastern entrance, called  ‘char darwaja’ was demolished by canon fire by the British in the 19th century. 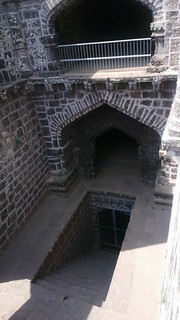 The presence of ample water & food storage inside the fort was a simple warfare strategy to survive. Panhalgarh’s strong defense line enabled Shivaji and his men to withstand a siege laid by the Adilshahi army that lasted for nearly 6 months.

Water flows through the fort

While there is an open water source in the compound wall, a three storied structure called Andhar Bav / Bavdi (Dark Well), cleverly camouflages a well inside the compound. As the third storey is flush with the road, both the well and the guards would have been invisible to the enemies during an attack. A 'hidden in plain sight' water source, it was thus protected against poisoning by the enemy and served the soldiers during times of duress.

This 'baoli' or well taps the underground springs originating in nearby higher hill slopes. Peering through the iron bars, one can see the water shimmering even today, fenced off from public access. As per local lore, the water level stays constant & unchanged throughout the year. Recesses in the walls, were where soldiers were stationed for its protection. A long lost, hidden tunnel in the building is believed to be an escape route from the fort. 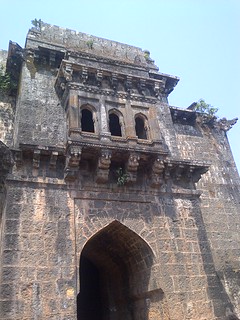 No one goes hungry!

The food problem for the soldiers had a solution in the form of granary buildings known as the Amberkhana, which are 3 massive stone and cement granaries with sloped floors, named Ganga, Yamuna and Saraswati. Staircases on either sides lead to the terrace that has small square shaped air holes through which the grain was poured in.

The soldiers measured and hauled the grain through a pulley system in the attached verandahs of these stores. The storage capacity is said to be 25000 khandis of rice, which in today’s language equates to 125000 kg of grain.

A dash of bravery & valour 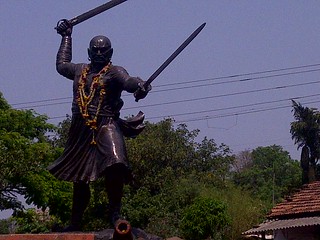 The story of Baji Prabhu Deshpande, has been immortalised in a statue at the outskirts of the fort. This heroic and loyal ‘sardar’ of Shivaji’s army, held the enemy at bay while Shivaji escaped safely after being imprisoned in this fort. Legends abound about this courageous man, who wielded a sword each from both his hands, and how even after his head was cut off, his body continued to swing around creating mayhem and killing the enemy! With his dress billowing in the wind and a ferocious look on his face, the statue seems to have captured his fluid motions and intentions beautifully.

Here, time seems to stand still, the imposing fort a testimony to the men and the battles fought in those turbulent times. Close your eyes, and you may hear the clash of swords, the shouts of an approaching enemy and maybe even the sound of the water flowing under the arched stonework.

How to reach there

Direct trains from Kolhapur are available to Mumbai, Pune as well as Delhi (once a week).

Kolhapur is well connected to other cities of the region. Deluxe and ordinary buses operate from both Pune and Mumbai.