Manu Moudgil
12 Apr, 2015 . 3 mins read
Ghadsisar pond in Jaisalmer holds many tales of dedication and love from an era gone by. It also symbolises how water was valued over caste and class.

A view of the Ghadsisar

Western Rajasthan is dotted by thousands of ponds, many of which are architectural wonders. Among these, Gadsisar (also called Gadisar) stands out. Besides its unparalleled expanse and architecture, the pond narrates tales of sacrifice, dedication and ingenuity but more importantly, it upholds water as being superior to any class and caste divide.

Numerous temples, domes and pavilions set in Jaisalmer’s signature yellow stone and decked with ornate carvings populate the pond. Initiated by Maharaja Rawal Ghadsi Singh in 1335, the pond’s development went on for years jointly managed by the king and his subjects. In fact, Ghadsi Singh himself is said to have done manual labour at the site. He was killed by political opponents while supervising the construction but the work did not stop. Instead of following the then prevalent tradition of entering the pyre of her husband, Maharani Vimla completed the wish of her husband and oversaw the construction.

The pond unites everyone 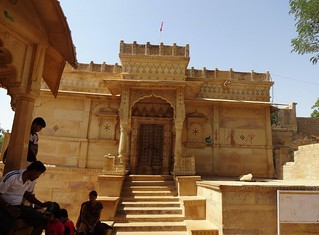 The water body spread over several kilometres gathered the affections of many who made contributions by either constructing new ghats, temples or rooms for travellers. It is said that a danseuse, Teelon, also wanted to show her love for Ghadsisar by building a beautiful gate but the king thought it would be against his stature to pass through a gate built by a danseuse. However, Teelon was quick witted enough to have a temple made on top of the gate and the king had to give in.

Over a period of time, schools also started operating and a special army unit was raised to protect the pond which supplied water to the whole town. Though the planners were not qualified engineers, they knew how to gather nature’s bounty. The vast catchment area diverted every rain drop falling on the ground towards Ghadsisar. The water which overflowed from the Ghadsisar, filled up nine other ponds located sequentially thus making the area with the lowest rainfall in India, water surplus. 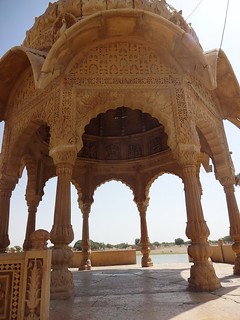 Today, the Ghadsisar is in a sad state. A station of the Indian Air Force and several other structures have come up on the catchment area thus reducing the inflow. “The city gets its water supply from the Indira Gandhi canal and hence little attention is paid to Ghadsisar now. But given a chance, this pond can serve the whole city again,” says Anand Kumar Vasu, a local journalist, who frequents the place everyday to do his writings.

The pond with its vast blue expanse complemented by yellow stone structures still brightens up the scene thus attracting tourists and locals alike. Many of the families have been living on its banks for generations waking up to the sounds of conch shells and prayer bells from nearby temples.

People visiting the ‘Golden City of India’ make a halt here before proceeding towards the Jaisalmer fort. Some take to boating, others feed the fish, while quite a sizeable number sits on its numerous pavilions embracing the scene. Ghadsisar may not be in its prime today but it remains the object of affection of a city which finds solace on its banks.

How to reach Jaisalmer 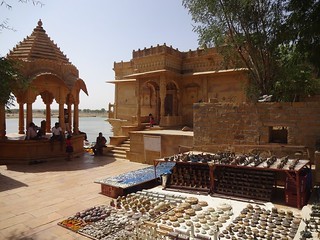 Jaisalmer is not directly connected by air. The nearest airport is 300 km away at Jodhpur, which is connected to all the major metros.

Direct trains from Jaisalmer are available to Jodhpur as well as Delhi.

Jaisalmer is well connected to other cities of the region. Deluxe and ordinary buses operate from Jodhpur, Jaipur, Bikaner, Barmer, Mount Abu, Jalore and Ahmedabad.