ARTICLES
No fish in water, fishermen at sea
A film on the decline of traditional, sustainable way of fishing puts forth pertinent questions on the future of the marine life and the fishermen who are dependent on it.

Fishers of Palk Bay out for a catch. Image by: Umeed Mistry

What makes a good fisherman? His tools like boats and intricate nets, the ability to make deep dives or the tenacity to stand the elements? For most of the fishers, it’s about having a deep understanding of the ecosystem and the wisdom to make it work for them. The fishing community at Palk Bay is a good example for this. A shallow water region between India and Sri Lanka, the bay is home to several biological resources and the people who thrive on this wealth.

This is, however, changing fast with the commercial fish trawlers damaging the sea floor and netting the catch in bulk, limiting the sea’s capacity to regenerate its marine wealth for future use. By bringing the narratives of both the small scale and the mechanised sectors of the fisheries together, the film Fishers of Palk Bay made by Evanescence Studios and Dakshin Foundation tries to bring forth the contradictions and conundrums that we face in fisheries today. With numerous families depending on trawler-based fisheries for their livelihood, how can we arrive at a solution that hurts no one?

The half an hour narrative, backed by good research and some splendid underwater shots, tracks the w 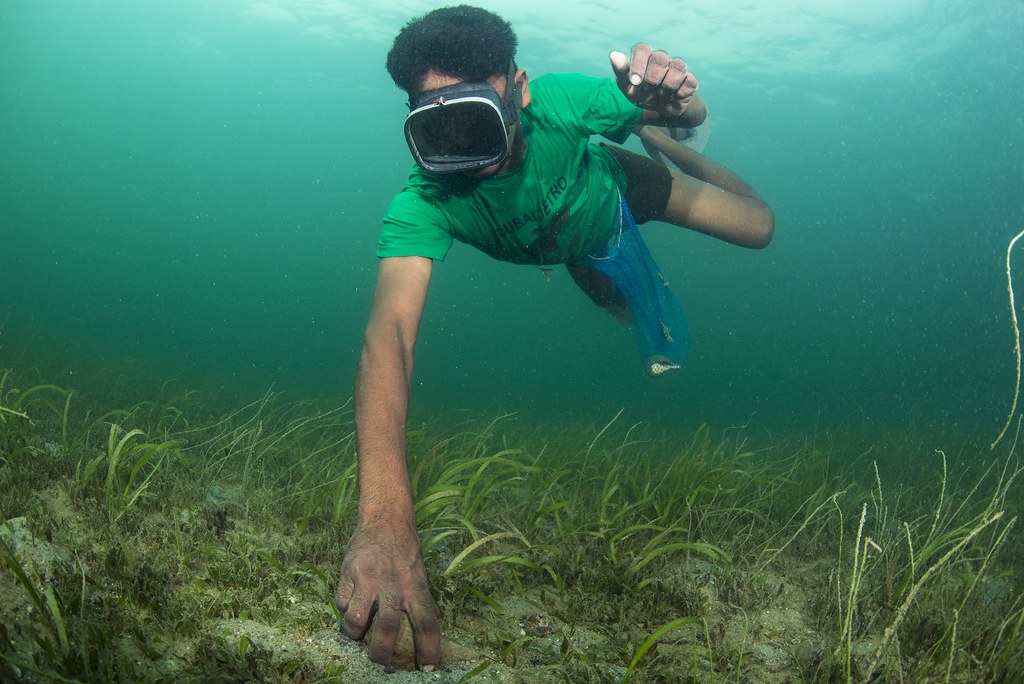 orking styles of the fishing communities in Palk Bay who seem to be the last bearers of traditional knowledge of this type of fishing. So, we have the divers who can hold their breaths for over one minute while collecting chanks from the sea floor. These divers take care not to pick the small-sized chanks. Lack of oxygen support during the dives self regulates this practice as divers are able to pick only around 20 pieces every day which are enough to make a living and also let the sea floor recuperate.

Southern Palk Bay is known for its traditional fish traps. Acacia tree branches are first cleared of thorns, sun dried and then woven into single-faced, double-faced or three-faced traps depending on the requirement.

The traps, which are anchored in crevices of the underwater rocks, have gaps narrow enough to trap a medium-sized fish and wide enough to let small fish pass through. Compare this to one-size-fits-all approach of trawler nets which even catch fingerlings (60-day-old fish). Moreover, these small fish don’t have great market value, but in the sea, they grow and reproduce, preparing the next pool of fish to be cherished.

The traditional traps fetch five-10 kg of fish which are enough for one family to eat and sell, but those who weave these are the last of the craftsmen left.

Mural net makers are the other traditional craftsmen who are on the decline. A gill net with a difference, these have floats made of calotropis plants, which match the dynamic movements of mural or half beak fish schools. The same nets can be used to catch other fish varieties by adding stones in them. “This shows how extensive is the knowledge of these fishermen about buoyancy and movements of various fish varieties. Depending on the season, the time of the day and the water type and its depth, they can modify their tools to fetch a particular fish,” says Umeed Mistry who shot the underwater footage for the film.

Prawn catchers also have specific three-layered net which drag like trawler nets but only skim the sea bed, catching only the food-value species. A trawler net, on the other hand, grabs a lot of things which are valuable under water but a waste out of the sea.

Though the trawler nets have contributed to the decline of these traditional knowledge hubs, even the fishermen who use them are worried about the shrinking produce due to over exploitation and their own future.

With the reduction in catch, fishermen are now more frequently risking conflicts with Sri Lankan fishermen and navy by venturing into their territory which still has a sizeable amount of fish and other resources. But is there a way out?

Aarthi Sridhar of Dakshin Foundation, who is the lead researcher for the film, feels this story has no simple solutions, but complexity can also be a good starting point for conservation. “There won't be a future in fisheries if a wide range of people don’t appreciate the effort and conservation ethics behind small-scale fisheries. This means that if they want to eat fish, they better be willing to pay the price for the fish caught through sustainable means. People's demands for consumption is also what fuels large-scale fisheries right?” she says.

Government can chip in with subsidies for small-scale fishers and buy back schemes for trawl fishers after a consistent dialogue process. This film can be a good starting point to understand what’s at stake.

A preliminary version of the film was screened at the Moving Waters Film Festival in Bengaluru, September 17-18, 2016

Get the latest news on water, straight to your inbox
Subscribe Now
Topic
Ecology and Environment
Fisheries
Society, Culture, Religion and History
Sub categories
News and Articles
Regions
Physiography
Eastern Coastal Plains
Tamil Nadu Plains
Continue reading
Sign up for our newsletter
A newsletter from India Water Portal for the latest updates around water and related issues in India.
About
Contact
Terms of use
Privacy Policy
Subscribe