The first thing that struck me when I reached the venue of the Nirmal Bharat Yatra in Indore, Madhya Pradesh was the vibrant colours that brought the entire event to life, even before visitors started streaming in. The stalls and games were all set up, the volunteers in their positions waiting for the children to come charging in, as they did a short while after we arrived. The hot afternoon sun rose quickly overhead, promising for a dry, hot and dusty two days ahead. Yet the heat did not deter the crowds of visitors who came to the Yatra in Indore, especially on the first day.

Part of the reason the first day was so crowded in Indore was also because Jairam Ramesh, Union Minister for Rural Development was scheduled to inaugurate the Indore leg. He showed up as planned, along with a whole bunch of other State level ministers and Gram Panchayat leaders. The Chief Minister of Madhya Pradesh, Shivraj Singh Chauhan was also present and talked about Madhya Pradesh's progress in the Nirmal Bharat Abhiyan (the erstwhile Total Sanitation Campaign). All the local leaders were in full agreement with the Union Minister, that sanitation was a problem that had to be solved. This was an interesting dynamic to see on the stage because the inauguration in Indore was just a few days on the heels of Mr. Ramesh's controversial statement in the press that India unfortunately has more temples than toilets - a remark for which he was attacked by the opposition BJP at the Centre. The ruling party in Madhya Pradesh is the BJP, but this controversy did not arise in the interaction between Mr. Ramesh and the state level representatives in Indore. All the state leaders were in complete agreement that greater toilet coverage and usage and better hygiene practices were essential for MP to move forward. In fact, Mr. Ramesh took his temples and toilets remark even further at the inauguration by saying that practicing hygiene was as important as performing pujas.  Clearly he is not one to shy away from controversy! Many male members of the crowd nodded in agreement to Mr. Ramesh's remarks that it is absolutely shameful that in this day and age, our mothers, grandmothers, daughters, wives and sisters have to suffer the indignity of defecating in the open. From this reaction, one could infer that many men do not, in fact, like that the women in their families have to resort to this, and that if they had access to toilets they would definitely use them. While many men did not seem interested in toilets for themselves, they did have a vested interest in building toilets for their women.

The games at the Yatra are designed to deliver messages on safe sanitation and hygiene in a manner that is easy for school children to understand, and entertaining to keep them engaged. Many are fun adaptations of games that we are all familiar with. Musical Toilets, for instance is an adaptation of Musical Chairs. The mechanics of the game are the same, only instead of chairs there are Indian style toilets. 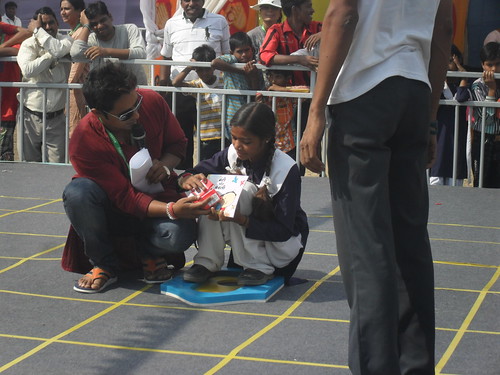 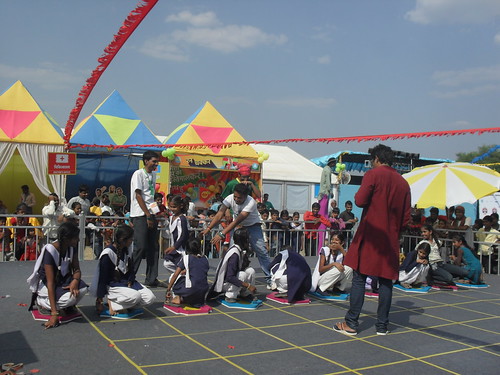 Musical toilets in action at the Nirmal Bharat Yatra, Indore

Then there is Poo Hoop, which consists of cut outs of squat toilets placed on a wall. The aim of the game is to get a ball into one of the toilets with a slingshot. Different toilets on the board have different points.

Do you remember the simple joy of playing marbles? When children today have Playstation, Nintendo and the TV to entertain themselves, Push out the Germs is a refreshing take on the age old game of marbles or 'kanchey', which is still very popular in rural India to this day. The game can be played by one or two players. Poo marbles are of two colors, and each player needs to get his or her poo pieces into the loo first. The two colors could also represent points in a single player variant of the game. 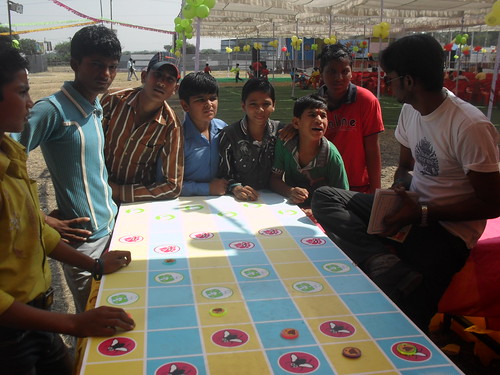 Push out the Germs

WASH United, one of the organisers of the Nirmal Bharat Yatra has developed all of the games on display. Their philosophy is to use fun ways to engage with people on serious issues like sanitation and hygiene. They have developed 20 games for the Yatra, all of which are being run by a team of energetic, enthusiastic volunteers. In Africa, they used the power and status of football to deliver strong messages on sanitation and hygiene. In India, they are using cricket to implement the same concept. Cricket Poo in the Loo is one example of this, where the player has to smack the poo-balls into the Indian squat toilets. The toilets represent different number of runs depending on the complexity. Each player gets 1 over (6 balls) to make a minimum of 12 runs. This game can also be played in teams, and recreates a setting similar to cricket practice nets with a bowling machine and a volunteer as the umpire. 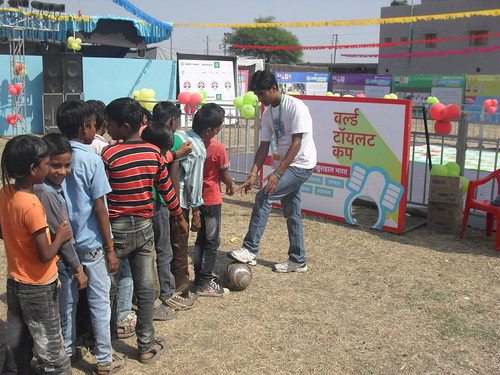 Poo in the Loo

Poo Minefield is played in two teams. One player is blindfolded from the team, and needs to be guided through the minefield by the rest of his or her team. Using only verbal commands, the player has to ensure that their blind folded teammate navigates the minefield without coming into contact with the 'poo mines'. Each time the player comes in contact with the mines or the obstacles, the team loses a point and must restart with the next player. The first team to get all teammates through the maze wins. One or two bonus soap tiles may be placed in the game, which give the team an extra life. 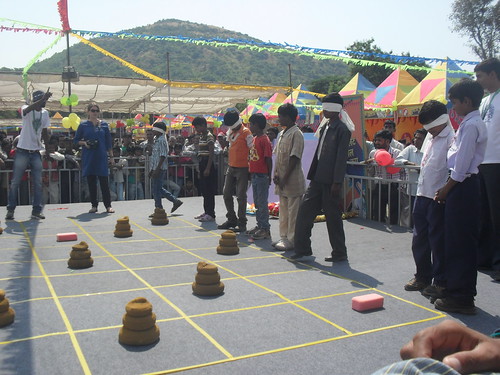 Germ Carrom is an adaptation of Carrom, a popular board game in India. There are two versions of this game - the one pictured below shows a town that defecates in the open on the board. The counters are pieces of poo that the player has to shoot into the toilet holes in the four corners of the board. 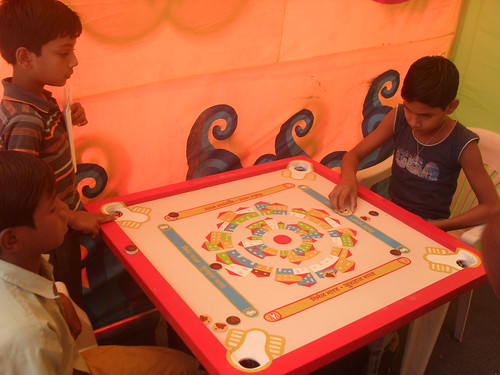 The Menstrual Hygiene Management (MHM) lab at the Yatra is coordinated by Water Supply and Sanitation Collaborative Council (WSSCC). The lab got a lot of traffic, with women streaming in throughout the first day. They were asked to take a survey on their own menstrual hygiene routine, and how much they are aware of the dangers of unsafe menstrual hygiene. After the survey, they were counselled by Goonj, an NGO that works to ensure that everyone has access to basic clothing. Goonj has pioneered a fantastic initiative called Not Just a Piece of Cloth, where the clothes that they collect are used to make affordable sanitary towels for women in rural areas who do not have access to clean, affordable sanitary napkins. A representative from Goonj talked to the groups of women in the MHM lab about the importance of practicing safe menstrual hygiene at home, even if they did not have access to sanitary towels. Most women in India re-use cloth from their old saris and blouses during their period. They typically re-use the cloth, making themselves vulnerable to a host of infectious diseases because they don't wash the cloth properly before re-using it. Sometimes, they are embarrassed to wash the cloth in the light of day for fear that men will see, so they wash them at night often in very poor lighting. This inevitably means that they don't end up washing the cloth properly. We also learned that many women use sand, ash and hay to line or pad the cloth, similar to the layering mechanism in a regular sanitary napkin. This also exposes them to a host of health problems, and most of them listened intently to the advice from Goonj on how to avoid such things. It was surprising (and heartening) to see that many of the women were comfortable enough discussing something as personal as menstrual hygiene with a man! 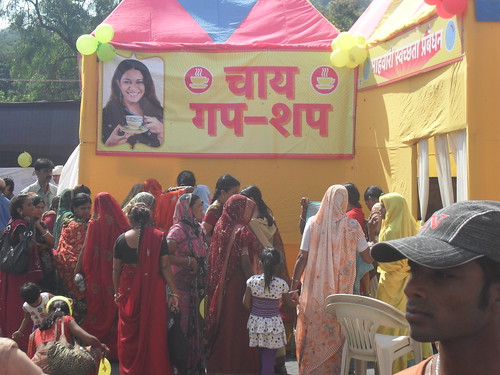 Goonj has done some fantastic work in an area of development that most people are not even aware of. Some of the stories about the atrocities that women in India have suffered purely due to poor menstrual hygiene were simply beyond our comprehension. We are so sheltered as women who live in big cities; we are privileged, really. We take Whisper or Stayfree for granted because we've always used pads and they're readily available and affordable for us. The monthly pain and discomfort that we all experience often blinds us from how much tougher it is for other women, who cannot even afford clean pads. In the face of this, it was rewarding to witness the MHM lab at work at the Yatra in Indore, if only for a few hours.

All in all, the Nirmal Bharat Yatra is a great first step in the right direction. There is an urgent need to kick start a conversation about sanitation and hygiene in this country. Whether or not it really affects change remains to be seen, but it is nevertheless a commendable and mammoth effort to start off with. As Jairam Ramesh rightly pointed out, we cannot hope to call ourselves a developed country if we do not become a clean, hygienic and sanitary country to live in. Sanitation and hygiene is also the kind of issue that needs strong political backing, and in this case it has been blessed with the vociferous support of the Union Minister. It has also gained huge traction with Bollywood actress Vidya Balan being signed by the Ministry of Rural Development as the Sanitation Ambassador, and cricket stars like Suresh Raina and Yousef Pathan lending their names to the cause. Vidya Balan has done a few TV commercials on sanitation already, some of which have already started airing.

October 19, 2020
Generating demand for sanitation infrastructure
How to steer conversations and processes that help boost the motivation of community leaders to encourage better sanitation behaviour?

October 17, 2020
Women hold the key to dietary diversity
A study finds that women's control over income and better decisionmaking power can go a long way in improving dietary diversity and tackling malnutrition in rural India.

October 17, 2020
Architecture of community program organisations and their data systems
A simple explanation is all you need to get your head around issues related to software technology and its use in community programs.