My city, my pride? Anticipating a river's revival - Cooum, Chennai

“Chennai could have given Amsterdam a hard run for its money, only if..” These are the kind of delusional ideas I grew up with in the city through which two (in)famous rivers find their way to the Bay of Bengal.

Chennai’s Cooum and Adyar need no introduction. Most locals are quick to dismiss the thought that they are actual ‘rivers’ and not just really large open sewers. The term ‘Cooum’ has almost become synonymous with the various terms that describe a smelly sewer. It is surprising to know that many people actually refer to open sewers which are large enough to run from one neighbourhood to the other as the Cooum!

Chennai's landmarks - The Cooum, the Napier bridge across the river and the University of Madras' clock tower

If you happen to move about in the north or central part of the city, you are sure to travel along or over the Cooum in one locality or the other. From Arumbakkam to Choolaimedu to Egmore and Chindadripet, the river sneaks up on you wherever you go. Sadly, the sight is not as pretty as it could have been. It is indeed hard to believe that this very waterway was once healthy enough to provide clean water for those around it. The Cooum is reported to have sustained around 49 species of fish in the 50’s. Today, the river is a toxic cesspool incapable of supporting any form of life.

There have been several attempts to resuscitate the river right from the scheme initiated by the then Chief Minister C.N.Annadurai back in the 60's to the more recent attempts that were launched a decade ago. But it's no secret that none have been successful so far. The Tamilnadu government has once again taken up the cause of the city's rivers and are considering spending around Rs 10,000 Crore to clean up the Cooum and the Adyar along with the Buckingham canal.

Here are snapshots of the river and the city that grew around it: 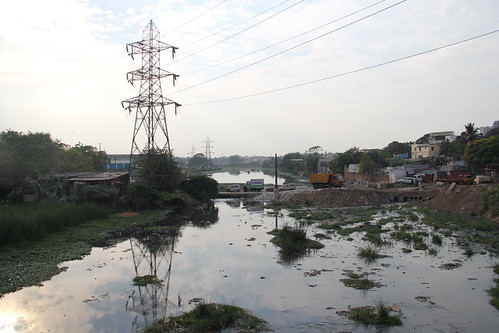 Before the metropolitan limits were expanded, the river entered the city limits at Arumbakkam flowing through Poonamallee. The river originates from a small village in Tiruvallur district to the north of the city. The Cooum's survival depends on the many tanks on its path. There are around 75 such tanks from which the river collects surplus water to maintain its flow. 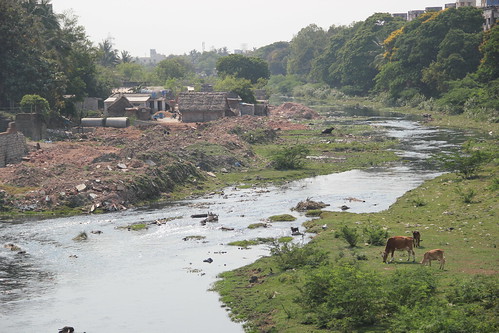 The river meanders its way across the city and runs through several neighbourhoods. Some of the bigger neighbourhoods through which the river plows through include Arumbakkam, Amaindhakarai (Aminjikarai), Choolaimedu, Chetpet, Egmore, Chindadripet and Chepauk. 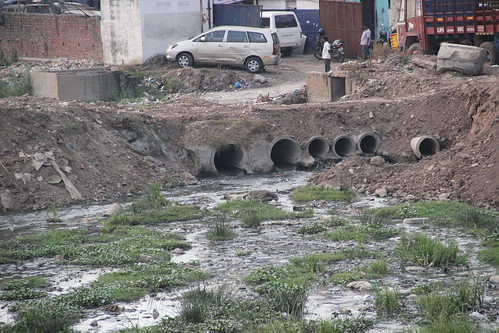 The river was a source of clean water even till a century back. Over the years, an indiscriminate dumping of industrial and domestic waste has rendered the river useless. 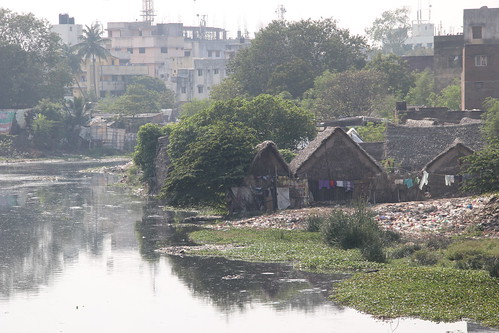 The government has spent a lot of time, effort and resources in the past to clear up the settlements along the banks of the river. The Slum Clearance Board had taken up construction of houses for those evicted in Okkiyam Thoraipakkam and Perumbakkam. Several tenements still remain and over 44,000 families are yet to be resettled. 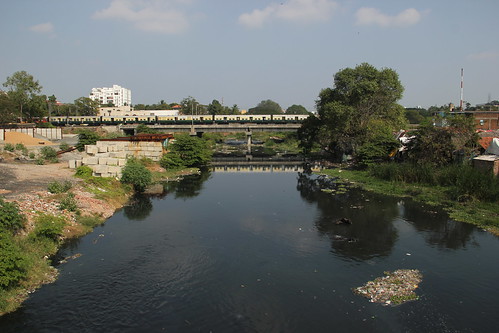 View of the river as it flows through Choolaimedu-Nungambakkam. 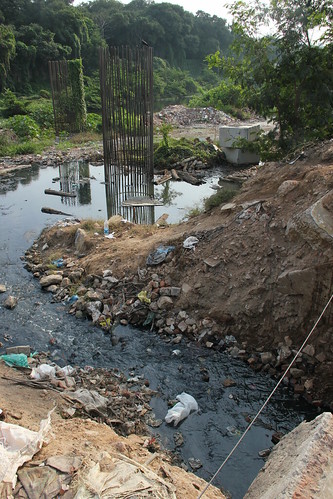 More sewage finds its way into the river at Spurtank Road, Chetpet. In the last few years, more than 700 sewage outfalls were identified but are yet to be plugged. The government is planning to construct more sewage treatment plants (STP) along the river to minimize the inflow of raw sewage. 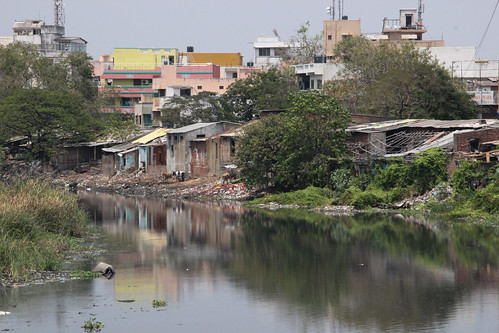 The Chennai Corporation's Cooum beautification drive in the past had resulted in the construction of parks along the river. One such park is located at Langs Garden, between Egmore and Pudupet. What lies right behind the park is this! A view of the Cooum from Pudupet. 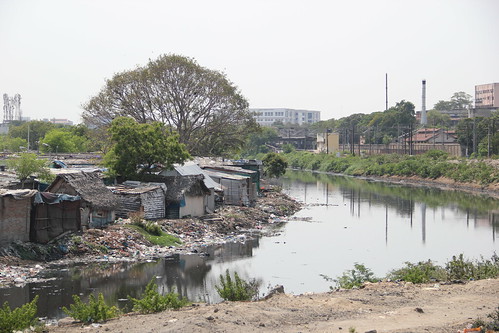 The Cooum splits into two before entering the Bay of Bengal near Chintadripet forming an island between the two arms. The biggest island is known as the Island grounds  which is about a kilometer from the river's mouth. The shanties lie on one side of the Island Grounds while the Park railway station lies on the left bank of the river. 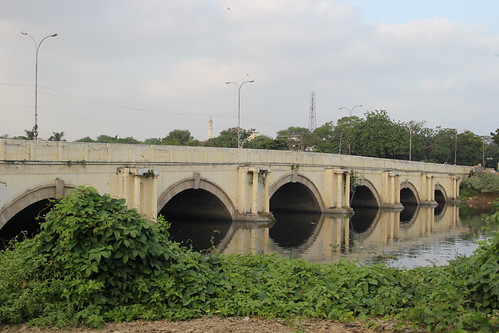 The Cooum has about 9 bridges constructed over it within the city limits. The Periyar bridge is one of the more famous ones in the city on Anna Salai. 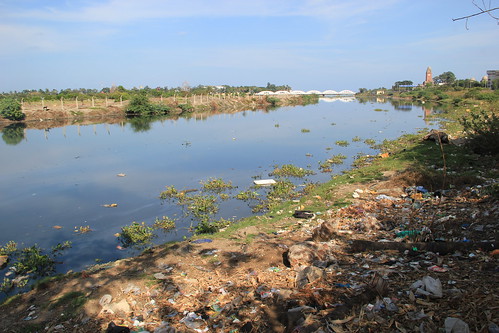 Garbage dumped on the banks of the river few hundred metres before the end of its course. On the right bank of the river is Sivananda Salai while the Island Ground lies on the left bank. The new Secretariat complex (now a multi super speciality hospital?) lies right opposite the river on Sivanada Salai. 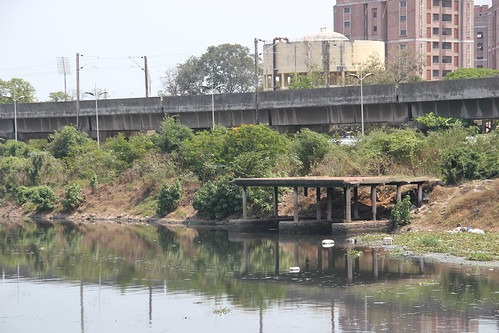 Several boat jetties like this one here on Sivananda Salai were build along the river's course in an attempt to beautify the river, without actually trying to clean it up. No points for guessing the outcome of the project! 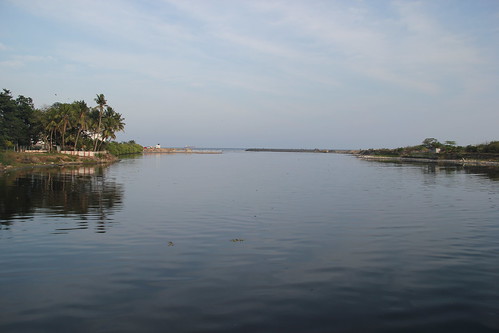 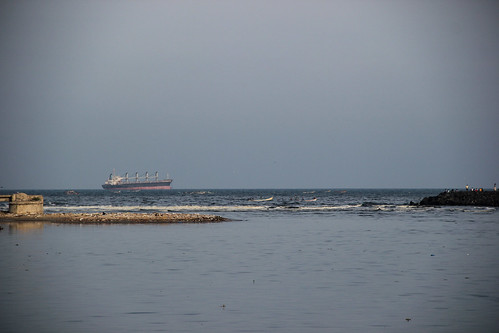 Below the Napier bridge, the shortest classified river draining into the Bay of Bengal enters the sea. The southern end of the river's mouth forms the northern most limit of Chennai's marina - the world's second longest beach. The Chennai port lies to the north of the river's mouth along with the offices of the Coast Guard. 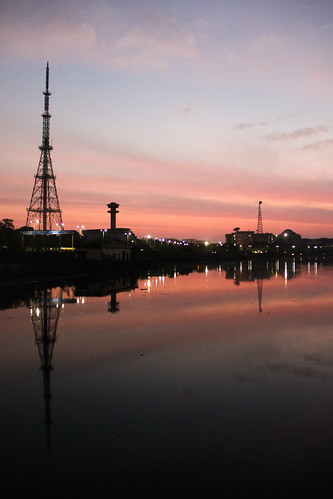 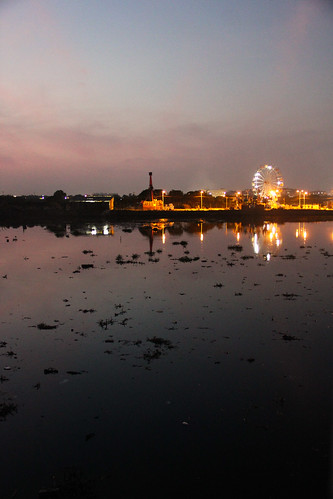 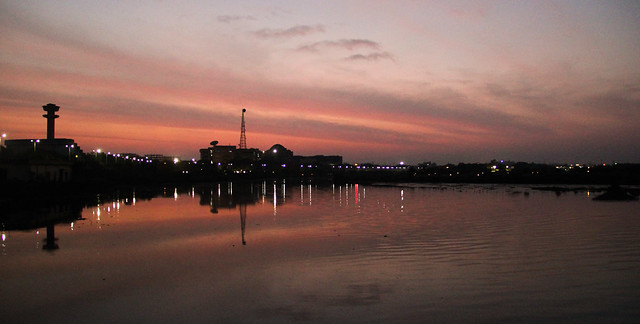 Some of the more famous landmarks along the Cooum include the University of Madras - Chepauk campus, Doordarshan Kendra office and the new Secretariat on the right bank of the river.

The Cooum we see and breathe today is decades of neglect, abuse and disrespect. Projects have come and gone, but not much has changed. Mere cosmetic repairs and readjustments are certainly not going to help. All we can do now is show some respect and anticipate.  A miracle!

For high resolution photos of the river, view the slide show on Flickr