Protectors of the lost ponds of Darbhanga

Sabita Kaushal
12 Mar, 2014 . 4 mins read
Talab Bachao Abhiyan', a group that is working on pond conservation in Bihar, suggests measures to the government and hopes to involve local youth to further the cause of these dying ponds.

In 1989, Bihar's Darbhanga town boasted 213 ponds. Today nearly 25% of them have been drained, leveled to the ground, filled up and built over. Hotels, houses and highrise buildings have bulldozed their way onto these water bodies. Do we not need these ponds any longer? Are they better of as bedrocks of development in these land-starved times?

Once upon a time

Not too long ago, these 'pokhars' or ponds were a meeting place for shared gossip and friendships, a necessary social site and a direct connect to the emotional, cultural and religious sentiments of the people living near them.

Even today, ponds serve an unseen and easily forgotten ecological purpose. As river activist Shashi Shekhar says 'Not only are ponds a link to our rivers, they also are the canvas along which rituals are carried out, besides a source of water for irrigation, bathing animals and fish rearing.'

Narayan Jee Choudhary of Mithila Gram Vikas Parishad that works in North Bihar laments this loss of an intrinsic relationship between humans and the water bodies, whether rivers or ponds. The embankments and encroachments on them have ruined and reduced this symbiotic interdependence to a mere necessisty. People have forgotten that ponds not only help ease the pressure of depleting groundwater but also act as a source of recharging groundwater and are home to an independent, thriving eco-system. 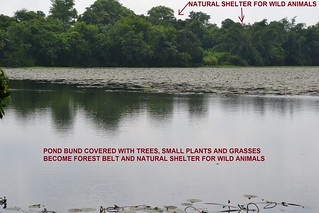 The ‘mahar’ or bund that surrounds a pond, is usually covered with diverse trees and shrubs, where birds, animals can find a home. As Ravindra Pathak, who has worked in the restoration of ponds in Gaya, says, "Ponds act as a shock absorber during floods. They help collect the excess flood water and provide bunds as a safety haven".

This was the case in the 1987 floods in Bihar when more than 10,000 people in Kyoti took shelter on the embankment of the Badh Pond and people of Nesta Gram Panchayat saved themselves by moving to the bund of Holiya Pond. During the 2004 floods, these ponds acted as a storage for the flood waters, giving people ample time to get to safety.

Mirja Khan Talab in Darbhanga was built by a Muslim, but it is the Hindus who perform religious festivals there. Similarly, Harahi pond was excavated by a Hindu king, but the Muslims immerse their Tiziya in this pond. Who will understand the worth of these ponds, when land is in short supply and landprices have rocketed and who will fight for them today?

Talab Bachao Abhiyan (TBA) is just such an initiative of the Mithila Gram Vikas Parishad, that works for the restoration, protection and preservation of the ponds in Darbhanga. They have responded to the illegal encroachment of these ponds through protests, discussions with the concerned agencies and citizen action. TBA began a series of activities to fight for the ponds that were sucked 'dry' in the race for more land. They have submitted memorandums, organised signature campaigns, photo exhibitions and awareness rally to sensitise the public.

Simple steps to save the ponds

'Talab Bachao Abhiyan' in the memorandum submitted to the government officials, state some simple and direct steps to save Darbhanga ponds:

Though the encroachment and illegal construction continue unabated, fortunately so does the spirit of the people who struggle to protect their ponds. Narayan Jee now plans to hold meetings with the local youth and students to further the cause of these dying ponds. TBA is also in the process of requesting political parties to declare a 'Jal Ghoshna Patra', an important declaration on water-related conservation & protection measures, in their political manifesto.

As Pathak says 'only when the concerned citizen and the government join hands, and together act as a responsible society, will we get any success.'

"Only when we stop viewing water as a commodity and understand its intrinsinc link to our life, will we understand the true value of ponds", remarks Vijaypal Baghel, a Delhi-based environmentalist, who filed an RTI for Delhi ponds in 2010.

It is not just the laws written on any legal paper, but this spirit of change that will help reclaim the lost ponds of Darbhanga.

View more pictures of the ongoing struggle in Darbhanga.