"Kangra Fort was so well guarded that it was safer to enter ‘leg first’", says the present scion of the erstwhile Katoch family ( Kat means sword, Unch means high, translated simply - one who is skillful with the sword), whose forefathers build and held this fort for many centuries. What he meant was that it was better to lose one's leg rather than their head while entering the fort, since in all possibility, a lurking guard would simply behead whoever entered. Legend has it that Lord Shiva killed the demon Jallandhar, whose ear is buried under the stones of this massive bulwarked fort and hence the the name 'Kangra', a distorted version of the ancient name 'Kangarh' (Kan means ear, and garh is fort).

‘He who holds the fort, holds the hills’ is an old saying in Kangra. Nestled between two rivers and edged by sheer cliffs, this fort seems impregnable even today. However, such was the lure of the fabled riches and jewels stored here that Alexander the Great, Mahmud Ghazni, the Mughal ruler Jahangir, Maharaja Ranjit and the British had all attempted to control it. 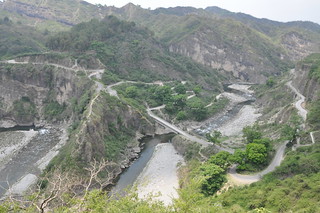 Two rivers -- the Ban Ganga and Manjhi (Patal Ganga) -- encompass the narrow strip of land where this strategic fort stands, while precipitous rock faced cliffs on the river's edge are an added safety measure. Inaccessible from three sides, it can be approached only through a winding, curved road that leads to a ridge barely 50m wide. A moat, which once connected the 2 rivers and was filled with its waters, cut through the rock at the fort's entrance providing added security, but is now overgrown with shrub. Narrow openings in the massive stone walls probably oozed hot oil on the unsuspecting enemy. Tales abound of how men with ropes tied to their waists, slithered on these cliff walls hacking away at bushes so that the enemy could not approach under stealth. The polished rock faces stand bare, the smooth slopes still threatening and unapproachable. 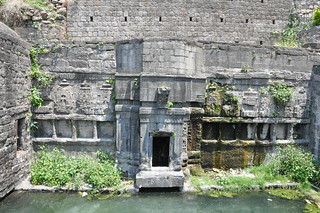 An open water tank, called the ‘go mukh’ greets you at the fort's ramparts. Beautifully carved with niches and engraved sculptures, it is flush with water even today. Straight run channels carry this water to another tank, from where the water flows out through a spout shaped like a man's head.

A broken, damaged building is all that remains of the ‘hamam’ (traditional steam bath or heat bath) next to the tank, possibly a bathing place for the royalty. It has underground steps that lead into a recess in the floor, as well as the remnants of the heating capillaries through which heated water flowed in the winters. The crumbling arches and dilapidated domes on the building stand testimony to how water was utilised and managed in a sustainable manner in this hilly region.

Imposing gates add to the allure of the fort. Also known as ‘phataks’ 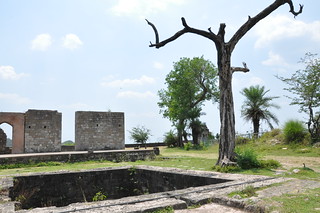 (doors), some open into small courtyards, others into passages that turn at very sharp angles barely wide enough for 2 men to stand. Among the 11 gates is the ‘Darshani Darwaza’, which is flanked by statues of the two river goddesses -- Ganga and Yamuna. Sadly, these are now defaced and scarred by some raiding marauder.

The steps that lead up to the fort have well-cut channels running along their side that directed rainwater to collection tanks. Stepping amongst the ruins, one can still see crumbling tanks with cut out steps reaching to the bottom. Once a celebrated palace, the stone pillars and ruins at the top of the hill boast of an open water tank, smack in the centre of the coutyard. Even the path up the fort is interspersed with wells, now covered and padlocked but still brimming with water.

In 1619, the Mughal army laid siege to the fort for nearly 14 months, for which as many as 52 unsuccessful attempts had been made in the past. For the first time in its history, the fort was overrun by an enemy force. And as Jehangir rode into the fort flushed with success, the Rajput queens flung themselves into a well inside the fort and died rather than be brought captive before the Mughal emperor. The well still stands today, it’s stones and still water a testimony to those tumultous, terrifying times. 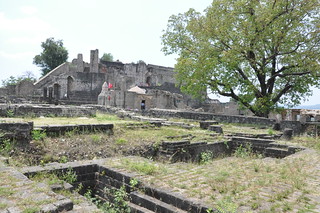 The ruins tell their story ably aided by the superb audio guide available at the gate. Here, locals would have you believe that if you see something glitter in between the stones, it could very well be a jewel since legend attributes the fort with 21 treasure wells, of which 13 were emptied by the Sultan of Ghazni and the British. So take a walk amidst the stones of the Kangra Fort, and you may well stumble onto one of the remaining 8 wells, and hopefully some treasure too!

Kangra Town has a narrow guage railway station 3 km away from the fort. The closest broad gauge railway terminal is Pathankot, from where you can take the narrow gauge train to Kangra (94kms). Pathankot is connected to all the major cities.

The nearest airport to is Gaggal Airport (8 km)