The desert that blooms

Manu Moudgil
31 Aug, 2016 . 5 mins read
Rao Jodha Desert Park in Jodhpur is known for its varied flora. Its resilience and beauty make a walk in this park truly enjoyable.

The desert park in its full glory during monsoon.

Rain has just abated but the clouds are threatening to burst again. “Not a good time to visit, what with reducing light and imminent showers,” I tell myself. “Don’t worry, it would be a light drizzle, if at all,” the person at the ticket counter assures. My guide, Sachin, a young, stout man with a winning smile, arrives from a tea break armed with binoculars and a slim guide book. “Monsoon is a very good season to visit this place. You will see lots of greens,” he promises.

I am at Rao Jodha Desert Park, a rocky spread of over 70 hectare in Jodhpur with 120 native species of shrubs, herbs, trees and climbers. After having done the usual routine of gazing down from high terraces of Mehrangarh fort, relishing miniature Rajput paintings and devouring mirchi vadas with kachoris, I am now ready to gain some insights about the plant life that soldiers on despite the harsh sun overhead and the sand below.

We come across an exhibit of various rocks and soils announcing the diverse habitats within the desert. Pink Jodhpur sandstone, volcanic rhyolite stone, yellow stone from Jaisalmer, the famous Habur fossil stone, saline soil of the Luni riverbed, sand from near the Indo-Pak border, et al.

We walk on the old aqueduct which channelises rainwater to Ranisar, a pond near the fort wall. Heaven-bound Rubberwell drapes the left wall. Introduced in India from Madagascar during the World War I to produce aircraft tyres, the tree was abandoned due to high processing cost. 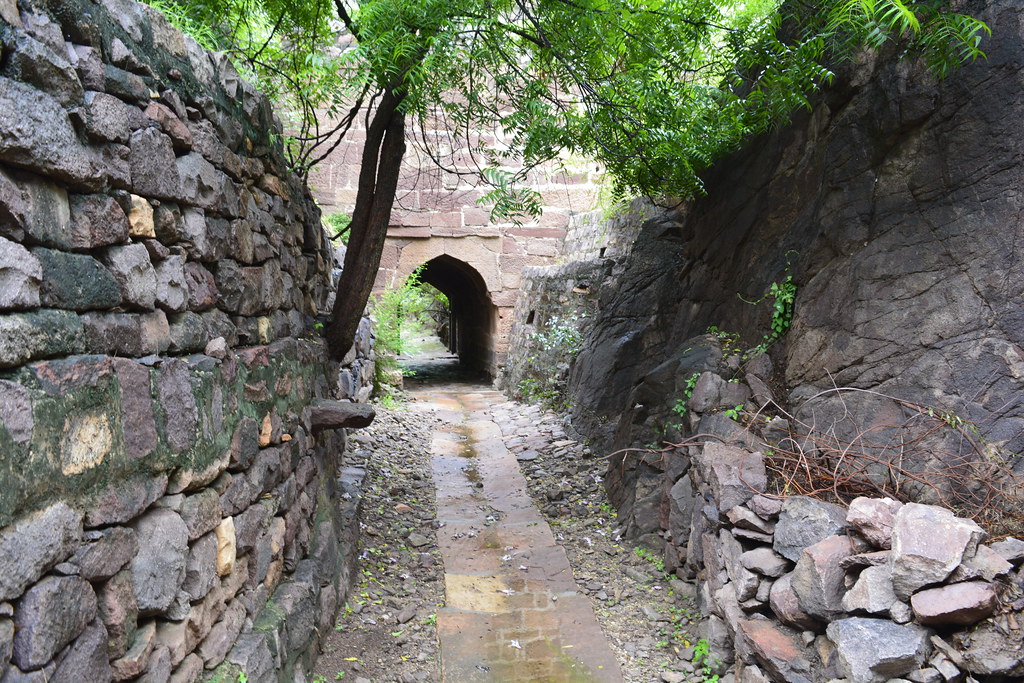 It was in 2005 that the Mehrangarh Museum Trust decided to develop the 70 hectare rocky wasteland around the fort and roped in filmmaker-turned-botanist Pradip Krishen. The task was enormous, requiring extensive travel in different seasons to collect various desert species, calibrating  “the right” soil mixes and enduring successive failures of certain plants.

But the biggest challenge was to deal with Prosopis Juliflora, a non-native invasive species which had covered the land. Also called Vilayati Babool or Baavlia (the mad one), the shrub proliferates at the cost of other species as its toxic secretion in the root zone does not let anything else grow. It’s not easy to manage Baavlia as it resprouts unless removed from the root. From traditional methods like smearing cow dung on stumps to modern arsenal like dynamites did not help. Then came a team of traditional rock miners, locally called Khandwalias, who pulled out Baavlia with their root zones, one by one, leaving no chance for it to regrow. Baavlia left the ground with a parting gift: the ideal locations within the rocks where new plants could grow. Soil mixes were put in these cavities and seeds planted. The greens grew on their own responding to the rain and the sun over a period of time. But many were also lost, as is the natural process.

Today, the expanse, which has four nature trails, hosts around 120 species of trees, shrubs, herbs and grasses, besides an equally rich animal, bug and avian life. 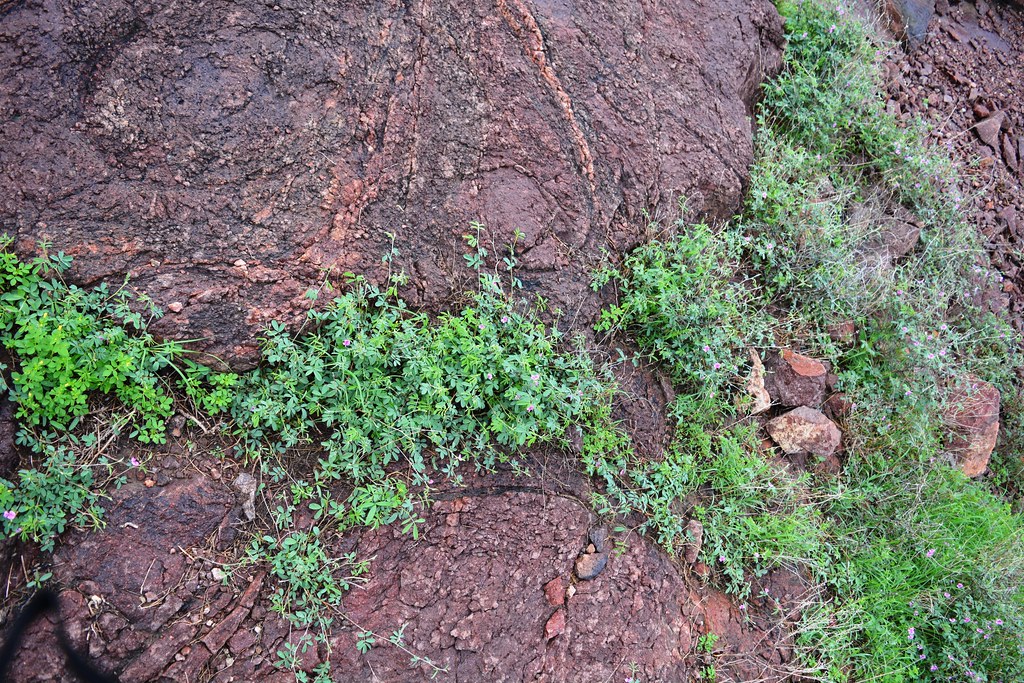 Safed Vajradanti (Barleria Prionitis) is famous for treating oral disorders like gingivitis, dental caries and is commonly used in ayurvedic mouthwashes, creams and pastes. Its white flowers look like candles in the day time but bloom in the dark. These open buds got confused by the overcast sky taking it to be night. 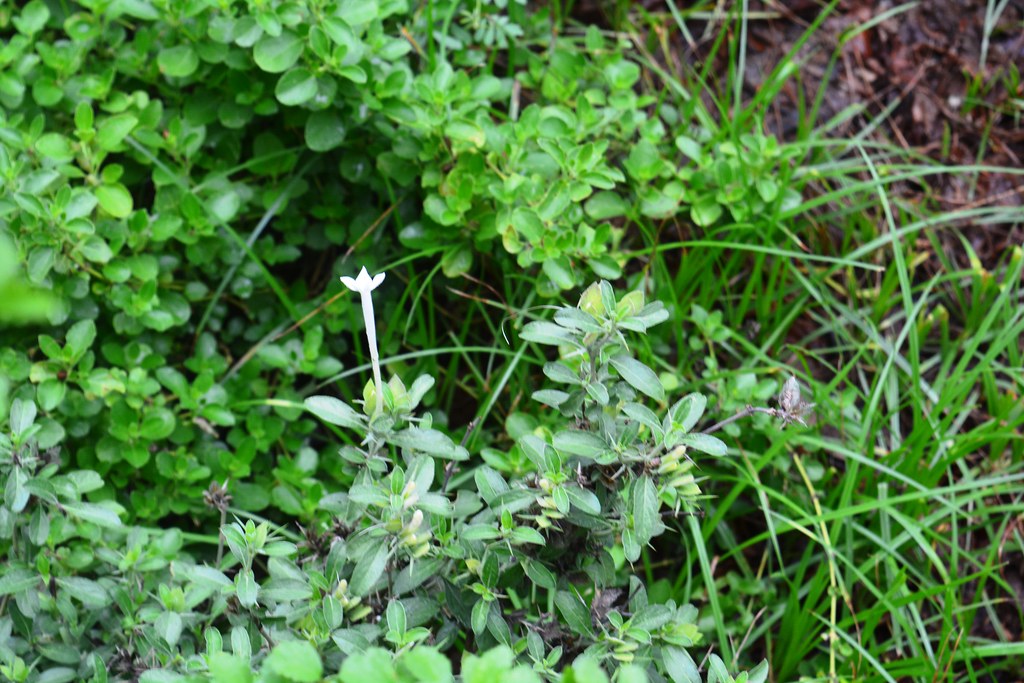 Kheer Kheemp (Sarcostemma Acidum) is also called Rambling Milkweed because of its sprawl and milky latex in the stems. As a typical desert plant, it cuts down on water loss (evapo transpiration) by going without leaves. Thus the task of food production or photosynthesis is left to the green stems. This shrub likes rocky hillsides and outcrops. Its colloquial names include Khursani tanto and Art thhor. 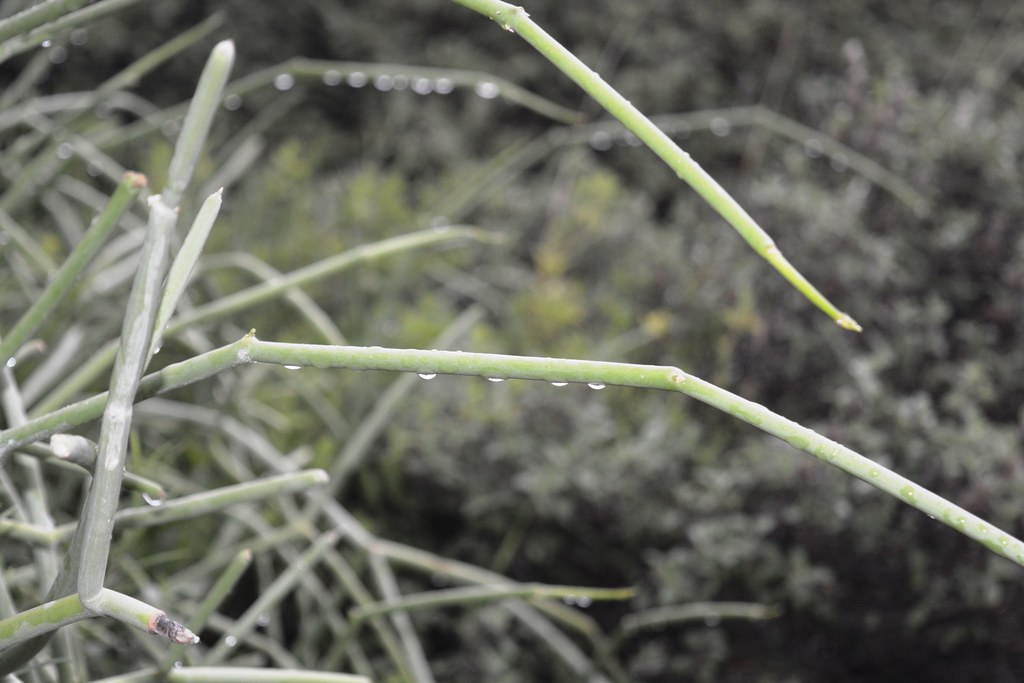 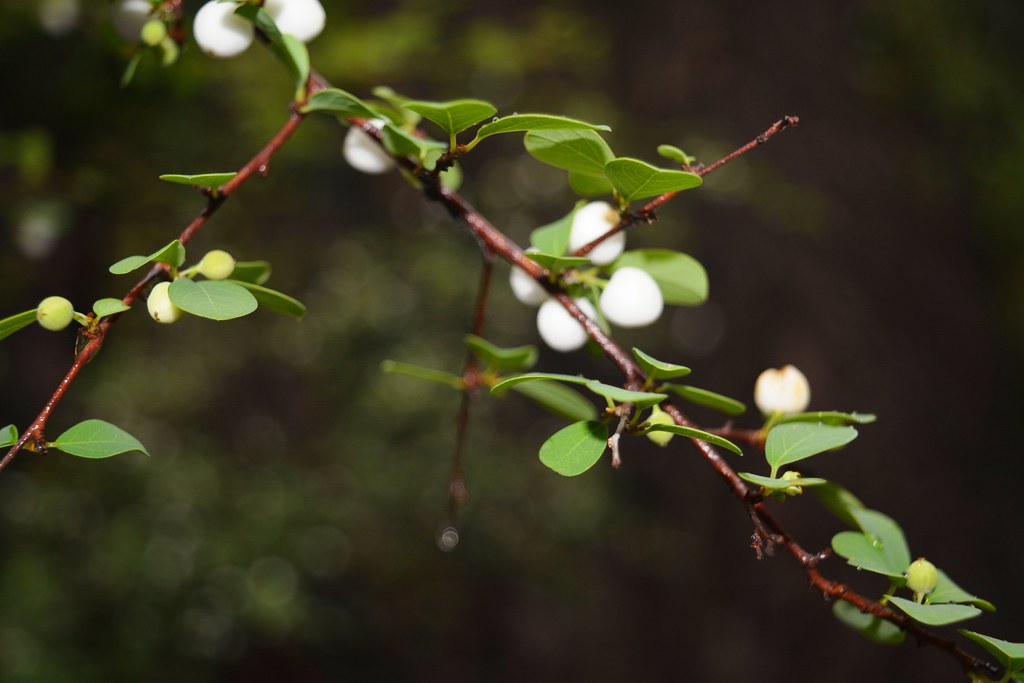 The mascot of Thar desert, Thhor (Euphorbia Caducifolia) with its multiple stems is often confused with cactus. “Cactus is mainly a Central American import. Though Thhor also stores moisture in its stems for hard times like cactus, it grows leaves as well, even if for a short time in summer. When cut, it spouts latex while cactus gives out a transparent jelly,” informs Sachin. Since thorns are at the top, this succulent plant also offers shade and protection to other desert flora from heat and grazing animals. Many small creatures like rodents and lizards also find an ideal home at its base. The Rao Jodha Park has adopted Thhor as its insignia for its many roles and also for its resolute. “This was the only plant which was found to be surviving even in the company of Prosopis Julifora,” says Sachin. 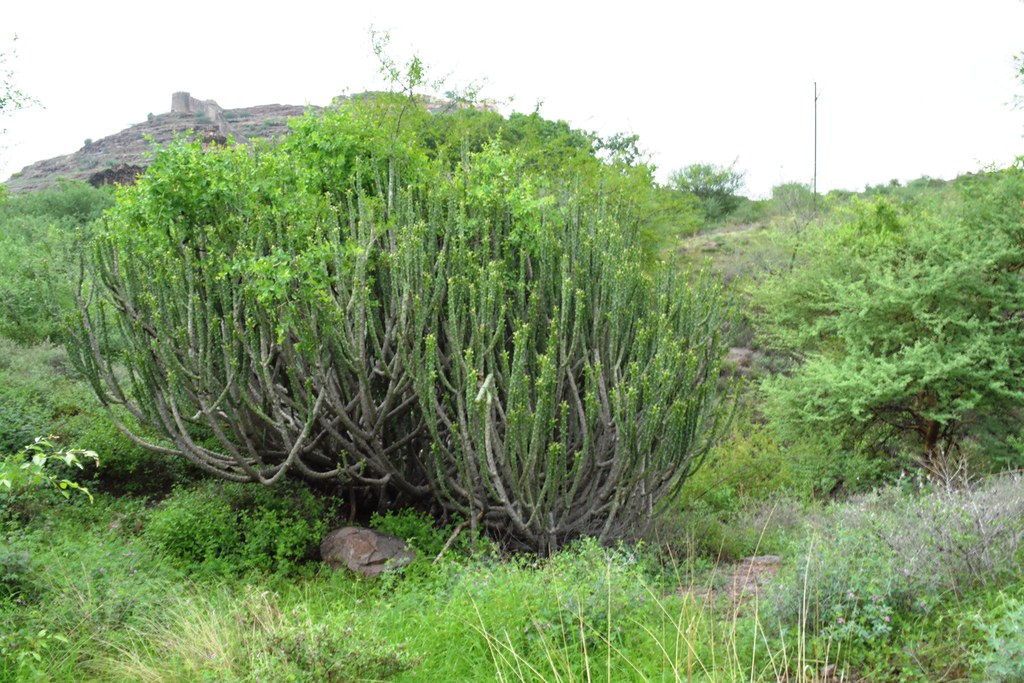 Tephrosia Purpurea also called Biyani (married) as reference to the ease with which it proliferates. It is commonly found in wastelands and can be a good green manure for growing vegetables while the dried plant is used in ayurveda to treat various diseases including bronchitis, bilious febrile attacks and obstructions of the liver, spleen and kidneys. It is also recommended as a blood purifier, in the treatment of boils and pimples. It is found to be poisonous to fish, but not to mammals. 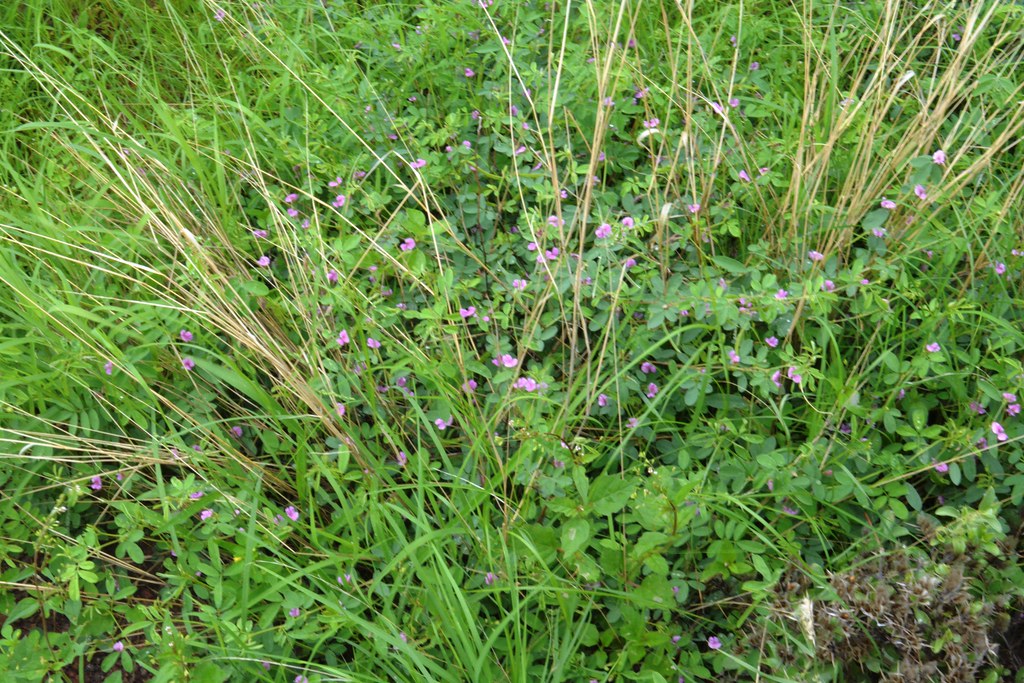 A small tree, Kumatia (Acacia Senegal) is known for flourishing in the desert. It is well known for the seeds which are used as an ingredient in the famous Ker Sangri vegetable preparation. It is also a good source for Arabic gum used in processed food and as a laminate for paintings. Kumatia hosts sets of three thorns. “Two outer thorns are slightly curved while the middle one is like a hook. It is said that if you are not caught while going in, you will be caught while retracting,” informs Sachin. 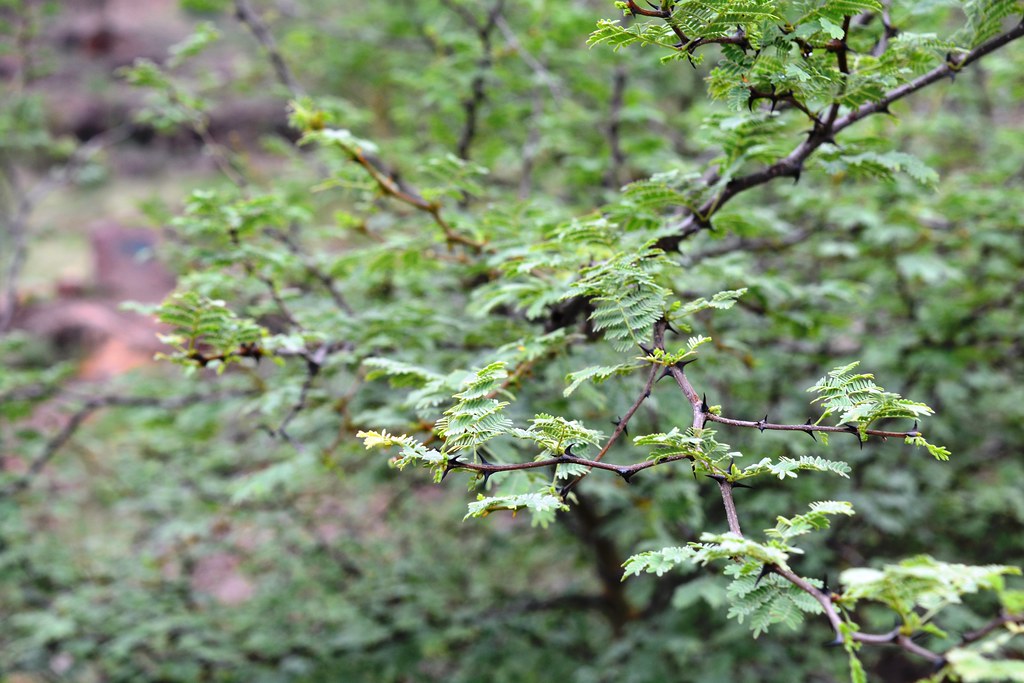 Also called White Cross Berry, Gangeti (Grewia tenax) is a shrub with white flowers and orange berries. It grows well in the desert but infestation of Prosopis Juliflora pushed it out of this area. The fruits are edible, but only just. 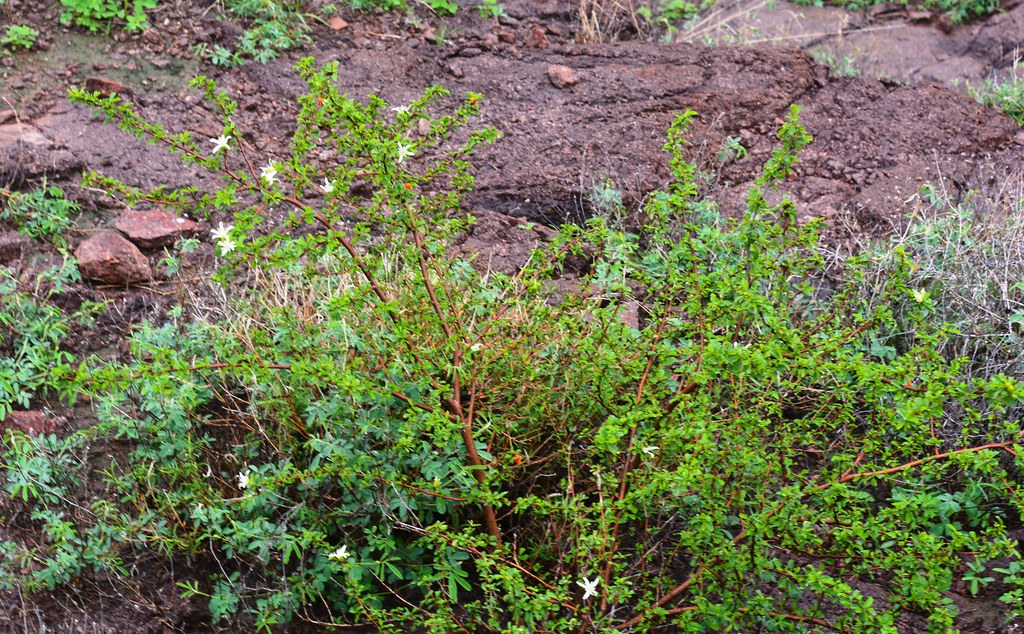 Return of the diversity in plants has also brought back the animals and avian species to the land. 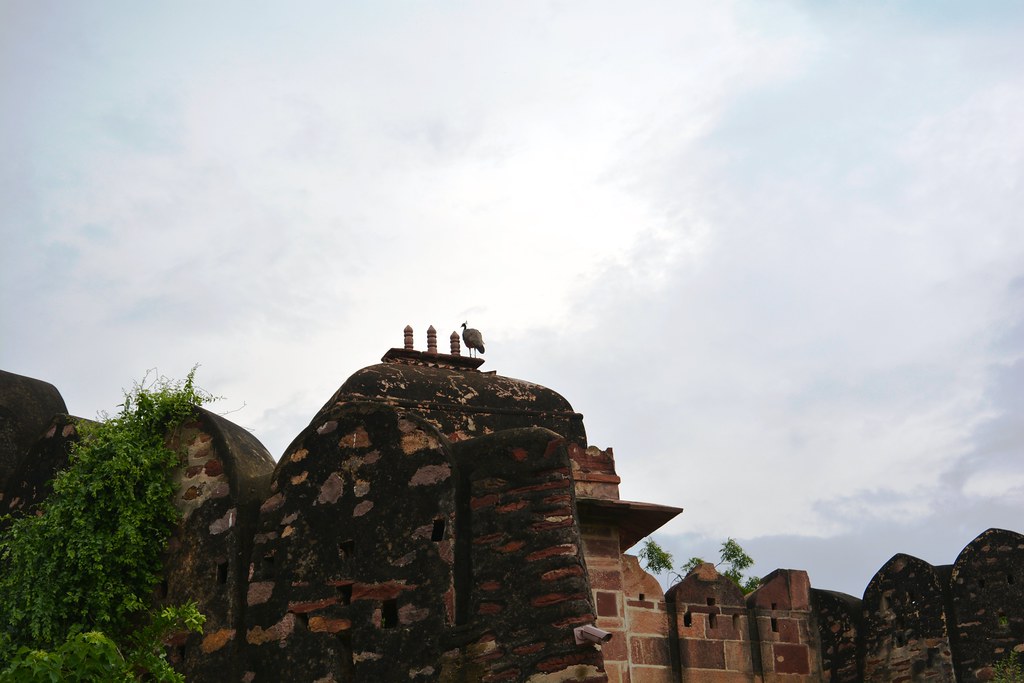 Post By: Manu Moudgil
Topic
Climate and WeatherDroughts and FloodsEcology and EnvironmentBiodiversity
Sub Categories
News and Articles
Photos, Illustrations and other Images