The lost Khazans of Goa

Hamsa Iyer
13 May, 2014 . 5 mins read
A traditional form of agro-aqua culture practiced in Goa is dying a slow death thanks to disinterest in farming as well as an increased interest in Pisiculture.

Khazans are reclaimed lands from the river or the sea. A created network of bunds protects the agricultural fields and adjoining villages from tidal flows. Khazan lands have three main features: sluice gate, poim and two types of bunds.

An outer network bund, which protects the field from the tidal flows of the river. This bund is made from locally available stone and mud, and clay known as chanoy is used as a filler in between two outer layers of the outer bund to withstand any vulnerability from the tidal waves. Mangroves, known to act as natural wave breakers, also bring down the impact of tidal waves. The inner bunds are made up of straw, mud and stones, which protect from any form of nutrient leaching. 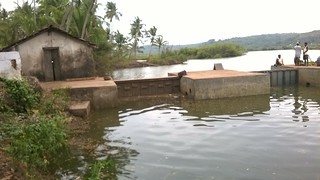 A sluice gate (made of wood or concrete) is located at the mouth of the rivulet entering a farmland to control the water levels. This mechanism regulates the water flow during high tide and maintains salinity in the farmlands. The gates with wood need repair due to organisms such as fresh water crabs that feed on them during the year.

At the end of the khazan lands is a depression called poim, which is at the lowest level of the low tide. It acts as a repository for excess water and protects agricultural fields from high tides. 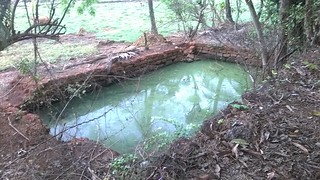 People grow a particular kind of paddy known as Corgut paddy during the rains. During the summers, the water near the river is more salty, so they grow vegetables, pulses, onions and peas. People are banned from entering the Khazan from June to September in order to save any damages to the poim. They can only fish within 100 m of the sluice gate.

Khazans were traditionally owned by the community. Even before the Portuguese came to rule Goa, consortiums would manage the resources in Khazans. These institutions were called gaunkaris (village-association), and had a few farmers managing the system. Under the Portugese rule, these consortiums were renamed as comunidads.

These comunidads further had a 'bhau' system where the bhaus (the local farmers maintenance union) would maintain the Khazans and carry out most maintenance in less than 24 hours. The expense would be collectively shared by the members of the Khazans. The comunidad would raise money by auctioning of farming rights to farmers on the sluice gate. They would lease out the land to farmers and earn thorugh a share of cultivated crops.

Laws changed in 1947. Between the cognidad and the bhaus came a landlord system. These landlords abused their power and demanded almost 90% of the produce from the tenants. In such a situation, the farmer or the tenant had no legal rights for their produce. It was then that the 1/6th Bill was introduced. Called the 'Kulkayda' or community law, this allowed the farmer to keep 5/6th of the produce and give only 1/6th as the rent for the land.

The management of the Khazans became the reponsibility of the tenants' association under the Agricultural Tenancy Act of 1964. So new actors such as the Mamlatdar or the Administrative Officer became a part of the Khazan system. All proceedings had to go through the Mamlatdar office. Eventually, even 1/6th rule was abolished and a practice known as 'Land to the tiller' was introduced. Under this, the farmer did not have to pay anything to the Cognidad. A government system which was prone to red-tapism grew across the state. This resulted in two disadvantages: 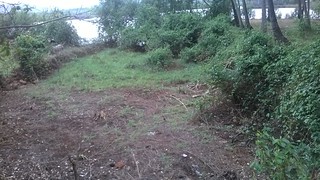 Today, there are very few surviving Khazans. One such belongs to Premanand Mahambare. He says, "The old system with the cognidad or the landlords were not bad. At that time, at least the system was maintained well and people could cultivate. Like every other government intervention, the two bills- 1/6th and Land to the tiller removed the important interest of maintenance of the Khazans". In addition to the existing problems, the next generation has also not shown interest in agriculture with almost 90% of youngsters working in cities.

The existing association of farmers prefer Pisciculture (fish farming) to paddy cultivation. Their vested interests purposefully do not allow the maintenance of the bunds of the poim. 'Fake-breaching' is a common occurence and bunds are either not maintained properly or water is allowed into the poim with force to gather more land for pisciculture. The association does not undertake the maintenance of the sluice gate and this leads to water flooding the reclaimed land of the Khazans. In some cases, the auction on the sluice gate is also internal, so the hopes of farmers who want to cultivate something on the Khazan land are also low. Of the 18,000 Ha Khazan land, 75% of it is induced with salt water due to lack of maintenance. 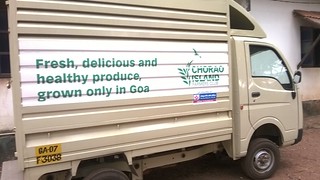 There have been several appeals to the government to restore Khazans but there has been no action. In some places, the sluice gates have been repaired, bunds have been fixed but in these places farmers do not understand the larger context of Khazan farming. Through farmers clubs, Mahamabre and others are trying to spread its importance. In some cases he finds goodwill from other farmers. There are talks of the Khazan Land Bill since 2012, which is meant to bring about clear roles and responsbilities on maintainence of the bunds, poims and sluice gates. The Bill is also said to bring in schemes relevant to the Khazan lands, but whether it will succesfully revive the traditional form of agro-aqua culture is something only time will tell.