The Jalsatyagraha of the evicted of Indrasagar and Omkareshwar dam

Bilal Khan
16 Sep, 2013 . 4 mins read
Villagers in six villages protest standing in water in their fight for Land-for-Land compensation from the government.

Oustees of the Indrasagar and Omkareshwar dam protest in six villages in Madhya Pradesh protest in the form of Jalsatyagraha (mode of Satyagragha is by standing in water). This protest that began on 1st of September is spread across the three districts of Harda, Khanda and Dewas when the backwater that submerged the land of 254 villages caused displacement of 50,000 families. The Jalsatyagrahis are from all walks of life- young, old, children. With them, giving sheer determination is also a physicalled challenged member who shares his name with the river Narmada- Narmada Prasad. Narmada Prasad protests even on his tri-cycle.

While the oustees were protesting for their land, the administration charged them with Section 144 of the Indian Penal Code (Joining unlawful assembly armed with deadly weapon). The police force forcefully removed the Jalsatyagrahis (Protesters who were sitting in water) from the water and threatened them of harsh actions if such a protest were to be repeated. However, this did not deter the villagers. Krishna Bai, a leader from Narmada Bachao Andolan dared the police to arrest her and continued to protest. The Jalsatyagraha has had an impact on several of these protesters- from Eczema to skin being removed. A few protesters share their insight into the project. Bharat Gurjar says,'We used to be farmers, we are now laborers'. Another person added- 'Had the profit of Rs. 3000 Crores that had been earned by the construction of these dams been earned, this plight would have never come'. 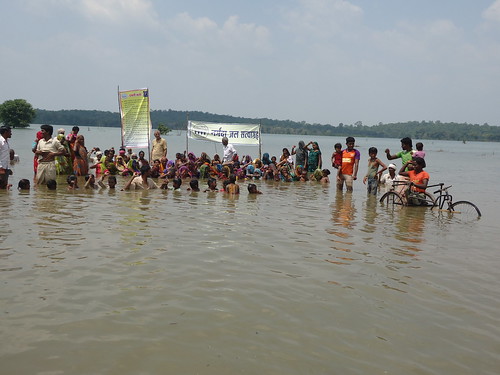 Among Jalsatyagrahis who have been arrested and jailed is Narmada Bachao Andolan member Chittropa Palit. A diabetic, she now faces health implications as she is not being given proper food in jail. She met Sushma Swaraj in Indore later and informed her of the demands of the Jalsatyagrahis. The Jalsaytagrahis are very disappointed by the role media is playing, claiming that media’s role is biased.

Villagers and Jalsatyagrahis say that this fight for water is not just only the fight of Land-for-Land, but also a fight for their rights of livelihood, education, society and culture. Seeing their determination, I could not stop myself from shouting their slogan- Zameen ke liye Zameen! (Land for Land!)

The author- Bilal Khan is an intern at National Alliance of People's Movements (NAPM) and this is his report of a two day visit to Hanifabad and Malud Villages in Madhya Pradesh. He can be reached on bilalkhan3639@gmail.com.