ARTICLES
Insects aren't the enemy, pesticides are!
Understanding the life cycles of vegetarian and non-vegetarian insects is key to keeping the natural balance in crop cycles. Farmers in Haryana who have studied this phenomenon, explain.

Every night, an incandescent bulb lights up the terrace room of a house in Lalitkhera village in Haryana. Insects from the adjoining pond swarm to this solitary bright spot under which Sheila Devi sits with a cup and saucer in her hand. She traps these insects one at a time to study their physical traits while other family members sleep.

An unlettered woman in her late 40s, Sheila can recognise around 200 farm insects as well as their nesting, dietary and reproductive traits. It was this knowledge that helped her brave the onslaught of the whitefly, an insect which wiped off cotton farms in north India last year. “We had a good harvest and also saved money on pesticides,” she says.

Sheila is member of a farmers’ group in Jind district of Haryana, which believes that pesticides do more harm than good. It is not just about environment pollution and health impacts either. Working under the banner of Dr Surender Dalal Keet Saksharta Pathshala, these 250 farmers are not proponents of organic or natural farming. In fact, they do use chemical fertilizers but when it comes to insects, they have a unique approach.

Unlike adopters of natural farming who label insects as friends or enemies and prefer herbal pesticides and insect traps, these farmers have taken the route of mutual coexistence. “We can’t even see many of these small creatures with our naked eye but still believe that we can control them. It is better to make our peace with them than waging a never-ending war", says Manveer Singh, one of the early adopters of this concept.

An important motto of this group is that every insect is important for the crop. “We categorise insects as vegetarian (who feed on crops), and non-vegetarians (who eat other insects). A farm needs both of them. Vegetarian insects maintain the optimum level of foliage and other parameters. They are attracted to plants by their fragrance or by visual signals like flowers. Once the number of vegetarian insects rise, non-vegetarians insects arrive, and that takes care of the population explosion. By spraying pesticides, chemical or herbal, we disturb this natural balance,” Singh points out.

It was in 2008 that Dr Surender Dalal, a former agriculture development officer at Nidana village, started the insect-literacy campaign after studying the behaviour of various insects over the years. Patience and belief in nature is the hallmark of this campaign.

Though Dr Dalal passed away in 2013, his knowledge and accomplishments live on as the early adopters are now spreading the message further. They never ask farmers to stop using pesticides. “We just tell them to learn about the insects which are supposedly harming their crops. After the training, it is up to the farmers to decide whether they want to use pesticides or not. But we can give a guarantee that they won’t", says Malik.

During the training, participants are given magnifying glasses to recognise and calculate the numbers of insects in a farm. This exercise tells them the average insect level at one point of time. Collection of this data every week shows the natural cycle in action as the count of vegetarian insects increases at first and then declines with a rise in the number of non-vegetarian insects. Among non-vegetarian insects as well, it is a particular type called ‘Parpetiya’ in local tongue that makes the real difference. These parasitoids lay their eggs in the bodies of the vegetarian insects. Their larvae eventually grow inside the hosts feeding on their bodies and eventually come out by killing them.

During the training, participants calculate numbers of various insects in a farm. Collection of this data every week shows their natural growth cycle.

One such predatory insect is colloquially called Angira. This lays around 120 eggs in as many mealy bugs, notorious for destroying cotton crop. “Spraying of pesticides also kills predatory insects like Angira while offsprings of the mealy bug survive because they are in a pocket under its belly. This unleashes a greater crisis as the population of the mealy bug rises but there are not enough predators to control them,” Singh says.

Last year, when whitefly thrived due to favourable weather conditions, these farmers also faced a perplexing situation. The optimal occurrence is six whiteflies per leaf, but the count last year was 10. The group discussed all the options including the use of neem-based herbal pesticide but the decision taken was to wait and watch. “Next week, the number declined to three whiteflies per leaf without any intervention as the predator insects did their job well. Other farmers used pesticides but did not get more than 3.2 quintal per acre. I got 6.8 quintal and saved on the input cost too", claims Singh.

Even though climate change is resulting in more frequent pest attacks, farmers who understand insects feel that nature is still able to maintain the balance. "Human interference is more responsible for the increasing crop failures," Malik says. 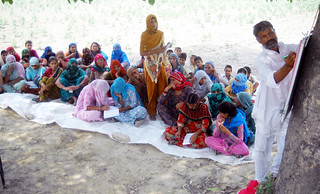 For the last few years, the popularity of the pest literacy movement has grown manifold drawing the attention of government and community leaders. District administration, Agriculture Department and the Haryana Farmers’ Commission are already behind the campaign. The New Delhi-based National Centre for Integrated Pest Management is conducting a three-year trial on the technique.

While the concept is spreading in other districts as well, many farmers from neighbouring Punjab have also attended the training. Involvement of women farmers took the campaign to greater heights. “Women in Haryana may remain in veils but they do more field work than men and hence have a greater say in such matters. Today, we have 100 women in the group who are spreading the message further,” informs Malik. These women have also composed several raginis (Haryanavi folk songs) on this concept.

The popularity of the pest literacy movement has grown manifold, drawing the attention of government and community leaders.

The customary dispute settlement mechanism called khap panchayat in Haryana had a peculiar issue at hand when the literacy campaign members approached them to resolve the human-insect conflict. Of course they laughed at it first but when the members explained the science, the khap formed a study panel which included a former judge, a food policy expert and the secretary of the farmers’ commission. The panel recommended the promotion of insect literacy by the government.

Last year, an all-caste khap mahapanchayat was held at Nidana village which also had a mock trial. While farmers gave their viewpoints, literacy campaign members, including women, pleaded the case of vegetarian and non-vegetarian insects. After listening to all the sides, the mahapanchayat decided that insects are not to be blamed and farmers were instigated against them by companies wanting to sell pesticides.

However, despite all these supportive statements, the campaign members feel left out because of a lack of financial support. It is difficult for group members to take out time from the field and conduct training for other farmers. “Till the time Dr Dalal was with us, he would coordinate everything as being an agriculture development officer he had the time as well as the required knowledge. The state government should fund such movements because avoiding pesticide will not only increase farmers’ income but also improve the health of the general population,” asserts Ranbir Malik.

Considering that pesticides are one of the reasons for increasing input cost and hence farm debts, adoption of pesticide-free farming holds a promise of profitable farming as well.

Get the latest news on water, straight to your inbox
Subscribe Now
Topic
Agriculture
Climate and Weather
Climate Change
Sub categories
News and ArticlesSuccess Stories and Case Studies
Regions
Political
Haryana
Jind District
Continue reading
Sign up for our newsletter
A newsletter from India Water Portal for the latest updates around water and related issues in India.
About
Contact
Terms of use
Privacy Policy
Subscribe