ARTICLES
How soil and water conservation transformed the lives of people in a remote village - The case of Gulliyada village in Talavadi block of Erode district, Tamil Nadu
Soil and water conservation are necessary to make agriculture self sufficient, sustainable and viable especially in hilly regions that are hard pressed for these resources. MYRADA (Mysore Resettlement and Development Agency), as an institution, is involved in a big way in various activities that engage local people in planning for the development of their area in the three southern states. In Erode district of Tamil Nadu, the Krishi Vigyan Kendra (KVK) has been instrumental in bringing about a marked change in the topography of the region.

Mysore Resettlement and Development Agency - MYRADA - was founded in 1968 to assist the Government in resettling Tibetan refugees. By 1982, MYRADA moved out of resettlement and began to focus entirely on farmers and the marginalized communities in rural areas.

The village of Gulliyada is located in Talavadi block, mostly made up of undulating plains and hills

MYRADA, as an institution, has a respectable presence in the southern states of Tamilnadu, Karnataka and Andhra Pradesh.

The Indian Council for Agricultural Research (ICAR) operates Krishi Vigyan Kendras (KVK) across the country. KVKs are managed by various Agricultural Universities and research institutes, in order to assess and refine latest technologies as well as products that will be of use to farmers as part of their agricultural extension activities where technology is taken from the lab to the farmer in his farm.

MYRADA KVK had started their work in land development and watershed management in the early ‘90s by constructing structures that harvest water and prevent erosion across the region. The number of structures and the extent of intervention progressively increased  through the years and currently they have managed to work in more than 30 micro-watersheds in Erode district.

What is a watershed?

The area where a river “catches” its water is called its catchment or watershed. A watershed can be visualized as a landscape shaped unevenly like a bowl or basin. When it rains, water flows down from the top of this bowl to collect at the bottom. The undulating land area of any region forms several such units, each of which are called watersheds.Water within each of these units drains to a common point. So the hills, valleys, forests and fields that encircle the falling rain and guide it into streams and then rivers, all form the enclosure that is a watershed [1].

The top of a watershed from where the slopes start is called the ridge, because it is the dividing line that partitions one watershed from another. Ridges demarcate the region into distinct areas that ‘catch the rain’ for a stream or river [1].

In a watershed, the slopes falling from the ridge to the beginning of the plains are called the ridge area. The many channels that flowing rainwater drains into are called drainage lines. Gullies, streams and rivers are all drainage lines [1].

A representation of how an actual watershed would look like. The outer limit or the higest point of the watershed is called the ridge line. The watershed boundary or the water divide can be drawn up by connecting the points of higher elevation all around the concerned area

In simple terms, a watershed is any area that catches the rain that falls in that region. In the case of hilly regions, a watershed is usually divided into three zones: the upper reaches, the middle reaches and the lower reaches, each zone having its own unique characteristics. It is important that each zone in the watershed be treated as a distinctive entity and water and soil conservation measures should be drawn up accordingly.

Some of the structures that help in soil as well as water conservation in a watershed area include bunds, terraces, check dams, ponds and diversion drains. All of these structures help in water retention as well as preventing soil erosion in hilly areas.

Community building is important for an organisation to bring about any kind of positive change in a region. Sustainability of any programme depends upon how well it is received by the people concerned. For this, it is important that the locals are involved at all stages of the programme.

MYRADA has been instrumental in bringing locals together in an organised manner in the form of Self-Help Groups (SHGs) and Water User Groups (WUGs), both here as well as in their other project areas. 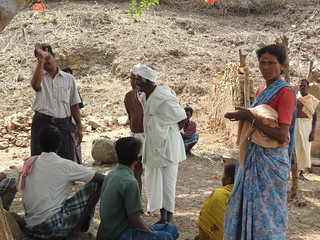 MYRADA has been involved in constructing common irrigation structures such a open wells and check dams apart from terracing the rugged hilly terrain. All activities are taken up after close consultation with the local community so that their needs are wholly understood and met. The villagers are involved at every stage from preparation to implementation.

Some of the projects are fully funded by MYRADA while a few projects are implemented through grants. The funding pattern for the watershed programme in this village was 75:25 (MYRADA : Villagers) where the villagers give their 25% share in the form of either cash or labour. 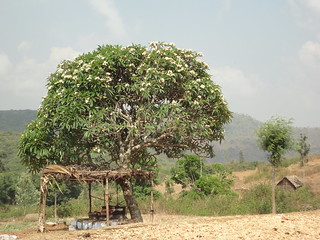 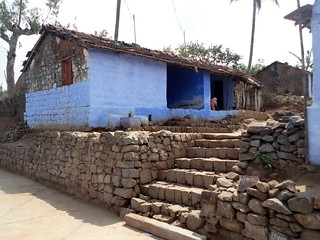 Located on the Western Ghats, bordering Karnataka, Talavadi block is primarily hilly and has undulating plains. The land has to be terraced before any form of settled/permanent agricultural system could be put in place.

Terracing is mainly done to transform steep and undulating portions into cultivable pieces of land. The slope is cut in such a way to give it a ‘step-like’ appearance, to level the land and make it even so that it becomes fit for cultivation.

Since the topography is predominantly hilly, terracing becomes essential in order to level the are and make it suitable for practising agriculture

Villagers were involved in constructing terraces and bunds across the slope. Bunds are mainly aimed at breaking the slopes at intervals, in order to prevent wastage of water that might otherwise drain out quickly in the event of the rain, taking with it, the more fertile top soil. 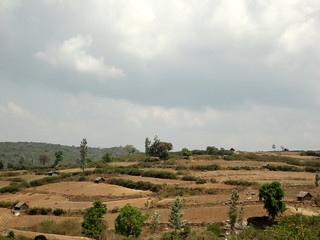 Stone bunds, earthen bunds as well as composite bunds (combination of stone, earth, rubble or any locally available material) are constructed to reduce the velocity of rainwater flow as well as minimise the chances of gully erosion.

When bunds are constructed across slopes, the water stays within the portion of land for a longer period, serving a dual purpose of ground water recharge as well as preventing soil erosion.

Check dams have been constructed across streams and water courses to create localized water reservoirs that hold the water in the fields for longer periods, thereby aiding in effective ground water recharge. 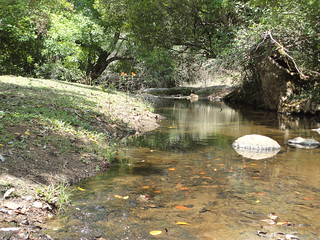 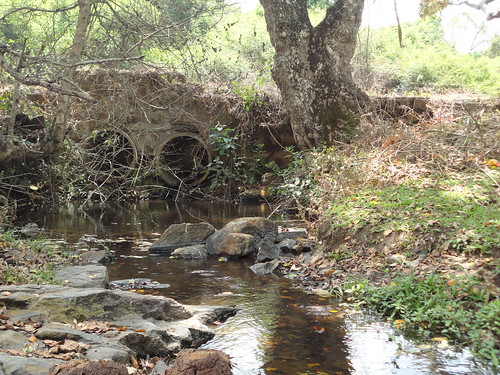 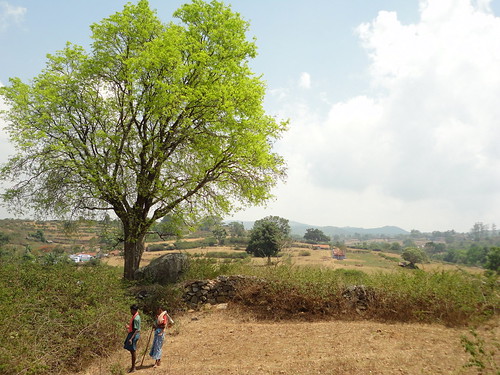 Millets (ragi, maize and sorghum) form a huge chunk of what is grown here. They are sown in August and by January they are harvested. After the harvest, they wait for the first rains in March/April to till and prepare their land for the next sowing.

Apart from millets, groundnuts, fodder crops as well as vegetables are also grown here. Beans, cabbages, potatoes and beetroot are few of the vegetables grown in this region.

Given the fact that the cultivation here is primarily rain-fed, vegetable cultivation has been made possible mainly due to the various soil and water conservation practices put in place in the area.

(Many thanks to Mr.Alagesan, Programme Co-ordinator, MYRADA KVK, Mr. Vijay Prakash, Mr. Giridhara and Mr. A. Gopal of MYRADA KVK for all their help and support during the visit)