When natural forests prevailed in Himachal

Authored By:
Posted By: Manu Moudgil
Posted Date: Sun, 2014-02-09 19:51
Veteran activist Kulbhushan Upmanyu talks about how the people of Chamba in Himachal Pradesh campaigned to protect the region's natural forests as well as their own rights.

The mountain states are at a loss when it comes to a defined livelihood option for its inhabitants. Himachal Pradesh is no different. While the upper reaches of the state have excelled in growing niche products like apple and chilgoza (a variety of pine nut), areas like Chamba that are below 4000 metres, have to depend on farming. In that too, we have to compete with farmers of neighbouring plain states like Punjab and Haryana which can grow better wheat and paddy with lesser inputs.

This is why a Himachali wears multiple hats-to remain viable. He grows crops, rears livestock and also picks herbs from forests to supplement his income. While this cushions him from disastrous events like crop failures, it also makes him completely dependent on the forests for his daily needs.

Fodder, fuelwood, herbs, wild fruits, construction material like mud and wood, besides the all important irrigation water from springs, forests help provide all this. But usually what is good for farmers and herders is not good for the authorities. The British introduced chir pine (pinus roxburghil) and other timber trees to India since they were in demand in the industrial world. They were useful especially for the expansion of the railways and for manufacturing ships.

Even after independence in 1947, we continued to follow the same practice. The situation worsened to such an extent that many of our pastures have now been converted to pine forests which don't yield any fodder. This is why we have to now buy fodder from Punjab at Rs 7-8 per kg thus increasing the input cost for herders.

Fighting for their rights 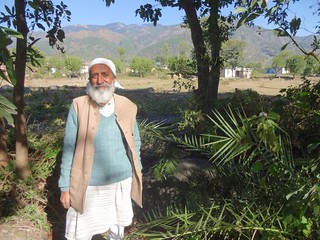 In the late 1970s, villagers of the Garhwal hills in present day Uttarakhand were writing history through the 'Chipko Movement'. They hugged trees as a mark of non-violent resistance against rapid deforestation.

At that time, Himachal's Forest Department was also continuing to replace native tree species with what it used to ironically call 'improvement forests'. They removed the tree bark and let the trees dry out on their own. These were later replaced with acacia, pine and eucalyptus.

Not only were these new trees useless as fodder but they also didn't allow any undergrowth of shrubs or wild grass. The ground below chir pine is always full of the needled leaves of the tree and this was unsuitable for the growth of other trees and plants. On the other hand, eucalyptus depletes groundwater.

The fact that the forest is an entity which provides environmental services including soil and water conservation was totally lost on the authorities. So, our campaign had to involve communities rather than officials. We held meetings with villagers across Himachal but the main area of activity was 18 Gram Panchayats of Sinhuta sub-tehsil in Chamba and Aut area of Mandi.

We were able to build a bond with the villagers through 'shram daan' (voluntary labour). Villagers used to decide some public work that they wanted to get done. It could be the repair of a water resource or the levelling of a dirt road. In the evenings, we would sing revolutionary and folk songs. Training workshops of 3-5 days were conducted. There were sessions on Gandhian economics and 'gram swaraj' (village self-rule). 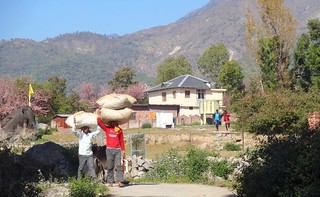 Nurseries were set up to grow traditional tree species, which were offered to the Forest Department officials who invariably refused to accept them. This resulted in the villagers taking direct action. Along with leaders of the movement, we would go to the forest, uproot the saplings of foreign varieties and plant the ones grown in our nurseries. All this would happen in full public view as a festival complete with drum beats and songs. Some of us were also arrested and put in prison for 2-3 months but were releasd soon without punishment.

Impact of the movement

In 1984, the then Chief Minister Virbhadra Singh, who is also holding the post currently, called us for a meeting. The Forest Department officials accused us of damaging the forests by cutting trees and lighting fires. We submitted photgraphs, which showed how the villagers went about their task in a disciplined manner without damaging the fences. All they had done was to remove the small saplings of pine or eucalyptus and to replace them with bigger, better saplings of traditional varieties.

We also had pictures of Forest Department workers removing the bark of fully grown trees of traditional varieties forcing them to dry out and die. We sought some limit to this 'improvement drive' so that at least forests near the villages, on which the locals were highly dependent, were left untouched.

The Chief Minister accepted our contention and an order was passed banning eucalyptus plantation in government forests. Pine was banned from plantation in forests near villages. In fodder-sensitive areas, the trade of charcoal was also banned. The nurseries of the Forest Department also stopped nurturing pine and eucalyptus except in lower areas like Poanta Sahib and Una which were out of the ambit of the order since the communities there were not as dependent on the forest.

However, the impact of this wrong afforestation policy of the past is still visible across Himachal in form of the human-animal conflict. Due to the removal of traditional shrub trees, the animals don't get enough food in the forest and are forced to enter farms and other human habitat.

Thanks to the replacement of traditional shrub forests with commercial trees, monkeys and wild pigs have been forced to leave their original habitats and come to the fields in search of food. This infestation has turned farming almost impossible in our area. Many farmers now keep their land fallow or grow fodder grass as it is not possible to save much of the crops. Habitat restoration is the only real long term answer to this issue but the state government is more keen on mining and hydroelectricty projects, which will worsen the situation further.

Even the Forest Rights Act (FRA), which ensures rights of locals dependent on surrounding forests, have not been fully implemented in Himachal. The state government keeps referring to the settlement done by the British in 1927, which recognised 24 'rights', including the right to graze animals. However, these so-called rights are actually concessions since they don't stand any legal ground. This is why FRA needs to be implemented in full spirit in all of Himachal. Various groups and activists are already campaigning for this and hopefully the state government will see reason soon and then decentralise forest management.

October 19, 2020
Generating demand for sanitation infrastructure
How to steer conversations and processes that help boost the motivation of community leaders to encourage better sanitation behaviour?

October 17, 2020
Women hold the key to dietary diversity
A study finds that women's control over income and better decisionmaking power can go a long way in improving dietary diversity and tackling malnutrition in rural India.

October 17, 2020
Architecture of community program organisations and their data systems
A simple explanation is all you need to get your head around issues related to software technology and its use in community programs.