ARTICLES
Go organic and triple your profits
Twenty years of hard work and devotion has made Kalaivani from Vellitiruppur, Tamil Nadu a celebrity of sorts in the organic farming circles in Erode district and beyond.

Kalaivani, a single mother of three, took to farming after the loss of her husband almost two decades ago. Since then, she has grown all the crops on her farm without using chemical or synthetic pesticides or fertilisers. Over the last few years, she has focused her time and energy in growing organic cotton.

People often associate the cotton crop with parched lands and farmer suicides but Kalaivani insists that cotton can be profitable when grown organically. Organic inputs like Panchagavya and Jeevamritham, both of which contain cow dung as their main ingredient, not only improve the crop yield but also enrich the soil. Organic pesticides and growth promoters can be made at no extra costs. Farm and cattle left overs can be effectively used to conjure up a host of different potions to boost plant growth and immunity.

Cotton is a 6 month crop. Flowers bloom when the crop is a month and a half old. This gives way to the unripe fruit at the end of two months. The pod doesn’t burst until the 4th month. At the end of 4 months, the fruits slowly dry up and dehisce or split open. Cotton picking commences a few days after the first burst. 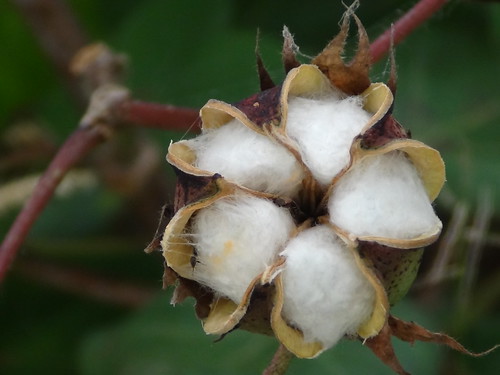 On average, a farmer invests around Rs. 10,000 to 15,000 for an acre of organic cotton. This includes the cost of seeds, costs involved in preparing the land and wages. Organic cotton is sold at a higher rate compared to those grown using chemical fertilizers and pesticicdes.

When chemicals are used, the crop lasts around six months and cotton can be picked three times at the most. When purely organic inputs are used, the crop stands for more than 6 months, so more than 3 pickings are possible. More cotton equals more money. In addition, over time, the quality and texture of the soil improves and the amount of water required for the crop's sustenance substantially reduces. 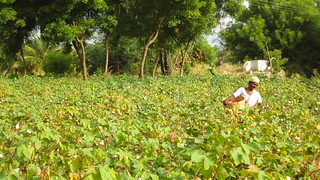 Overall, moving away from chemical farming has proved to have a lasting effect on the soil as well as the yield per acre.

Many thanks to Mr. P. Alagesan, Programme Co-ordinator, and the staff of MYRADA Krishi Vigyan Kendra, Gobichettipalayam, Erode district for all their help and support.

Get the latest news on water, straight to your inbox
Subscribe Now
Topic
Agriculture
Irrigation
Conservation - Reducing Water Usage
Livestock
Sustainability
Sub categories
News and ArticlesPhotos, Illustrations and other ImagesSuccess Stories and Case StudiesVideo, Audio and other Multimedia
Regions
Political
Tamil Nadu
Erode District
Continue reading
Sign up for our newsletter
A newsletter from India Water Portal for the latest updates around water and related issues in India.
About
Contact
Terms of use
Privacy Policy
Subscribe