Seetha Gopalakrishnan
16 Jan, 2017 . 7 mins read
Better green cover could be a way to reduce the extent of disaster a Vardah could bring. Here’s a lowdown on the trees that Chennai must have.

One of the many trees uprooted by cyclone Vardah in Chennai (Image: Seetha Gopalakrishnan, IWP)

Literary works from the Sangam period dating back to the fourth century BC indicate the presence of a five-fold classification system of geography and related ecosystems. The five types include kurinji (mountainous region), mullai (forests), marudam (croplands), neithal (seashore) and palai (desert landscape). And, the coastal city of Chennai fits snugly in the neithal landscape.

Dr T.D. Babu, one of the trustees of Nizhal, an organisation in Chennai that cares for trees, assures us that we have to look no further than the Sangam texts to understand what type of biotic environment best suits a specific landscape. “For every type of land classified, there is a record of the type of species that prevailed and were predominant. There is no question of any of us discovering species that are best suited for the environments now; it has already been done and recorded for posterity in literature from the Sangam era. All we have to do is go back to our roots, take note and follow,” he says.

Historically, Chennai was a consolidation of fishing hamlets along the coast with grassy fields and pasturelands. One such example of a locality named after the prominent land use is Mandaiveli (mandhai-cattle herd; veli-open field), a sprawling pastureland-turned-residential area with no vestige of its past but for the name. Species such as pungai or the Indian beech (Pongamia pinnata), poovarasu or the portia tree (Thespesia populnea), neer marudhu or Arjun tree (Terminalia arjuna) coconut and palmyrah dotted the landscape, along with a host of grasses and shrubs.

Dr Babu is a staunch believer of establishing sustainable and balanced ecosystems. He advises against the unmindful planting of trees. What is required is a thorough understanding of local geography and associated ecology. Given its coastal location and flat terrain, a combination of trees, shrubs and grasslands would be most suited for Chennai.

Jayshree Vencatesan of Care Earth Trust, a bio-diversity conservation and research organisation says, “Chennai’s concern is not so much botany as it is physics. Located along the coast and subject to strong winds on and off, plants and trees should be robust enough to be able to withstand strong winds. As far as Chennai is concerned, focus on grasses and shrubs is more crucial than trees, the reason being the city’s relatively flat terrain. Herbs, shrubs and creepers are therefore needed to act as a sponge to absorb the rainwater but help retain the water underground.” In addition, certain deep-rooted trees are also recommended for coastal ecosystems given the loose nature of the underlying soil. 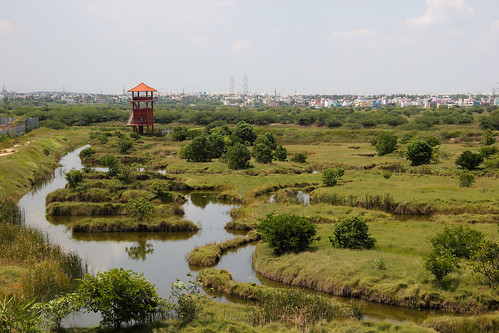 She also cautions against an unhealthy obsession with native and indigenous species. “While it is important to recognise native tree species, we should not forget the several naturalised varieties that have done rather well for themselves here,” she adds. Instead of dwelling on the indigenous-exotic difference, the focus should be laid on choosing non-vulnerable species over vulnerable ones. Some of the exotic species which have blended seamlessly with the local environment include the tamarind, the Indian almond and the white silk-cotton tree (Ilavanpanju). Similarly, naturalised species which do not complement the environment should be eliminated as far as possible. Eucalyptus, casuarina, and prosopis fall in this category. Again, the availability of saplings is a big concern. Organisations have been working with the forest department to grow and procure tree saplings suited best for the environment.

Care Earth has been trying to persuade the government to adopt a broad plan based on sound ecological principles. Instead of going in for a group-specific or species-specific plan, an ecosystem-based approach would be most apt for urban spaces as it would also accommodate human concerns. “Species-based conservation works well in natural areas--like a tiger conservation plan to protect the species and its natural habitat. But this does not work well in populated areas. Ecosystem approach incorporates the whole gamut of interactions--from symbiotic to detrimental and conflicting concerns--between the various inhabitants of a space,” notes Jayshree.

A case in point is the mighty banyan tree. While the banyan tree may provide ample shade with its wide canopy, it is not practical to suggest planting more of these along city roads due to the paucity of space for the roots to breathe and develop. Sturdy hardwood trees with scant canopy and those which absorb water slowly and scantily would be most suited. The lovely gulmohur and raintrees too do not fit the bill due to the lack of breathing space for the roots within the city limits.

Though eucalyptus and casuarinas act as effective windbreakers along the coast, they contribute very little in terms of enriching the ecology. Only if the local community is involved in tree planting and conservation efforts, ownership and therefore, the success of the programme can be ensured to a great degree. “Medicinal and fruit-bearing trees such as jackfruit and cashew nut should be considered outside city limits, especially along the fertile ECR (East Coast Road) stretch south of Chennai city, so that the trees provide an alternative livelihood option for the coastal community to benefit from them. The community, whether inside the city or in the peripheries, must be linked to the overall greening strategy,” Dr Babu adds.

Most of the native species are slow-growing varieties. This is because they absorb water and nutrients at a very leisurely pace. If a tree grows and spreads fast, it indicates the haste with which it absorbs water and nutrients. Such trees should be avoided. This is because trees that grow unhurriedly tend to channel a bulk of their energy into developing strong root systems, enabling them to withstand winds and storm-like conditions. “From a human perspective, these are considered slow growers, but this pace is perfect for establishing strong, stable systems. Most of the indigenous trees associated with coastal landscapes take their time to establish their roots and then channelise their energy into developing the shoot system,” remarks Dr Babu.

Almost a year ago, Nizhal embarked on an ambitious project to restore waterbodies and zeroed in on Chitlapakkam, one of the southern suburbs of the city. Christened the Chitlapakkam Neer Vanam, the plan was to establish a green corridor of sorts around the Chitlapakkam eri (lake) by planting sturdy, indigenous trees best suited along the water bodies.

The neer vanam has been mostly a volunteer-driven movement. “Since its inception in February 2016, 200 saplings have been planted along the bund in phases and shramadans are organised regularly. Volunteers systematically monitor the trees to look for signs of any disease and take care of regular maintenance such as applying manure and providing support for frail and delicate saplings,” says Bhuvana, an active member of the Chitlapakkam Neer Vanam team.

A huge chunk of the lake has turned into an active garbage dumping yard where both the panchayat as well as private entities dump solid waste. As the Chitlapakkam eri dwindled to less than 50 acres from its original 86.86 acre area over the years, efforts such as these are a breath of fresh air in the otherwise bleak landscape.

Planting frenzy not so healthy

Both Jayshree and Dr Babu caution against one common enemy—rushed planting. Most disasters are almost immediately followed by a blitz in activity with little or no consideration for local ecology and landscape. Plant biology, local geography, and environmental factors should be thoroughly understood before going in for any kind of mass planting of trees.

“There should be a directive issued by the government to citizens about species most suited for a particular area and proper planting techniques to prevent waste of time, money and manpower. Even within the city, appropriate species need to be chosen for different regions. The coastal areas have different requirements compared to densely-populated residential areas or stretches along the rivers and water bodies,” remarks Dr Babu. Chennai should go for a greening design which matches its requirements, which is in tune with its ecosystem and also is resilient to its vulnerabilities.

Trees almost always remain in the periphery—both literally and figuratively. Nizhal founder Shobha Menon puts it succinctly, “The trees have all been here, the lakes have been crying for attention, but it takes a Vardah to get people to notice the wealth all around them.”