Author:
Divya N
Post By: (not verified)
Posted Date: Wed, 2014-12-03 22:12
After 30 days of digging and removing 6000 tractor loads of sand, the evasive Dharmar Theertham was found intact with fresh water being replenished in a pit in the middle of the structure.

The word 'Theertham' literally means ‘water’ but in Hindu mythology, it is usually the physical holy water body associated with a temple or deity. Rameshwaram has 64 such theerthams. 22 of these are believed to be sacred and are within the premises of the Sri Ramanathaswamy temple.

Bathing in these theerthams is considered equivalent to doing some form of penance. Pilgrims first go to Varanasi, collect water from the Ganga and bring it to Rameswaram. This holy water is poured over the deity at the temple in the form of an ‘Abhishekham’. The pilgrims then bathe in the theerthams within the temple premises to wash away their sins. At the end of their visit, the devotees collect mud/soil from Rameswaram and deposit it back in Varanasi, completing the cycle.

But all the theerthams were not so lucky; the ones outside the temple premises were abandoned over the years. Most of them were polluted and poorly maintained, with broken bottles and garbage frequently found at the sites.

Fortunately, their luck has now changed. 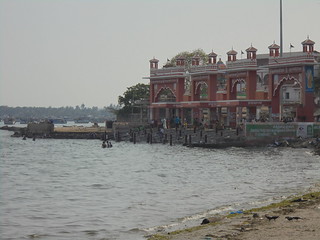 The Vivekananda Kendra, headquartered in Kanyakumari, has been working on renovating the theerthams across Rameswaram. The ‘Green Rameswaram Pilgrimage ’ project was inaugurated as part of the Natural Resource Development Programme or VK-NARDEP in January on the 150th birth anniversary of Swami Vivekananda. The project aims to work in the areas of Archeology, Biodiversity, Natural Resources and Eco-tourism.

The ten dimensioned model for the Green Rameswaram pilgrimage includes the following themes:

A part of the Green Rameswaram project is the renovation of the abandoned Theerthams in and around Rameswaram. The aim is to fully restore these water bodies to their working condition in the hope that rainwater will help replenish them to their lost glory.

The search for the lost theerthams

The Vivekandanda Kendra first heard about the theerthams of the five Pandavas and their wife Draupadi, but failed to locate them. The Kendra relied on the map given by the temple authorities as well as information from aged people living in and around Rameswaram. After relentless searching for weeks, they located the theerthams of Arjuna, Bhima, Nakula, Sahadeva and Draupadi. They also located the theerthams of Jada, Hanuman, Angatha, Jambhava, Ramar and Sugreevar.

Renovation work has begun in all of these theerthams but it is a long and tedious process involving weeks of clean up, excavation, construction and painting. "The support of the people living close to the theerthams has been very important to us. There have been people who have also opposed our renovation work fearing encroachment of some sort", says Aravindan of Vivekandanda Kendra.

People at Vivekananda Kendra believe that aged people living in Rameswaram are familiar with various beliefs and urban legends from stories they might have heard in the early days. During the search for the Dharmar Theertham, along with the map provided by temple authorities, they heeded to the advice of aged people living near Ramar Padham (Lord Rama's feet), which is the highest altitude of the island of Rameswaram. This place is frequented by pilgrims at all times.

They were led to an area of a large sand dune. These sand dunes have been built by strong winds over the years. They began excavation on September 1st 2014, when at some point they hit the walls of the ancient structure. This structure, found after more than 60 years, is belived to be at least 500 years old.

"We worked for an entire month, and removed 6000 tractor loads of sand using 7-8 JCBs everyday, to find the water body intact", says V. Sarawati, the Officer-in-charge. The interesting feature about this centuries old theertham is, that fresh water is being continuously replenished in a pit in the middle of the 80 X 35 feet structure. The plan is to rebuild the retaining wall and replenish the theertham with rainwater. The staff at Vivekanda Kendra also have plans to paint the walls of the structure with scenes from the Ramayana.