Fish frenzy in the land of butter chicken!

Manu Moudgil
16 Oct, 2014 . 8 mins read
Punjab has the country's highest yield from freshwater fish farming but can it sustain the momentum and kickstart a 'Blue Revolution'?

Gurdeep Bains is busy dealing with two sets of contractors who have arrived to net his fish. He had to refuse a third. “This is the scenario when the market is supposedly down as people tend to avoid non-vegetarian food during saavan, one of the holiest months in the traditional Hindu calendar. You can imagine the demand otherwise,” he says matter of factly.

Bains is one of the farmers in Punjab who has scripted a success story in fisheries instead of agriculture. At Bassi Gujran village of Rupnagar district, he enjoys the best possible setting for fish farming. While waterlogged and marshy areas provide a conducive environment, proximity to Ludhiana, an industrial city with the largest migrant population in the state, offers the best market possibilities. Punjabis are not traditional fish eaters, which is why consumption is dependent on migrants from Bihar.

Around 32,597 acres of Punjab is under fish farming with six herbivorous varieties namely catla, rohu, mrigal, silver carp, grass carp and common carp ruling the ponds. The state has the distinction of producing the highest freshwater fish yield of 2,500 kg per hectare over the last few years. Of the total production, 67 percent came from ponds while the rest were supplied by water resources like rivers, wetlands, lakes, reservoirs and canals.

Fish find a home in Punjab

Fish ponds first took off in Rupnagar district thanks to the abundance of water and the failure of agricultural crops in waterlogged and marshy areas. G. S. Virk of Kandhola village started fish farming in 1985 when there weren't even proper approach roads to the area. “I tried growing wheat and rice for five years but failed to get good results. Fish farming is a skill that we have acquired over the years,” he says.

Today, Virk has been able to achieve the highest production in the state for which Guru Angad Dev Veterinary and Animal Sciences University (GADVASU) honoured him. Dr. Asha Dhawan, Dean (Fisheries) of GADVASU, believes it is the clever management of resources which has helped Punjab achieve the highest yield in inland fisheries. “In Punjab, farmers have large landholdings and are able to afford the best technologies and expertise to get maximum yield despite a harsh winter season which is not favourable to fish,” she says. 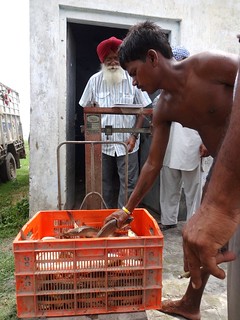 Virk, for instance, has over 30 acres under fish farming and uses the latest technology and information to ensure that the stock remains healthy. “I even hired a consultant who charged me Rs 5,000 per hour. He gave me very valuable advice on how to maximise the yield by timing the extraction of the stock well,” Virk says. The enterprising farmer is now promoting fish tourism by offering farm stays.

Fish farming, which the state government is promoting as an option to diversify from the wheat-rice cycle, requires lower input. “I had a debt of around Rs. 1 crore when I was doing the wheat-rice cultivation but with fish farming, there’s no question of debt as the input cost is comparatively very low. For instance, around 1,000 fish seeds are available for just Rs 100,” Bains says. On average, fish farm owners earn anywhere between Rs. 1.5 and Rs. 2.5 lakh per hectare, depending on the variety of fish.

Most farmers have also integrated their fish farms with agriculture thus enabling the sharing of resources. “Whenever pond water has to be removed, we use it for crops since the water is rich in nutrients reducing the need for fertilizers. Poultry droppings can also be used as feed for fish,” informs Manjit Singh Sandhu, who runs a 50 acre fish farm and a hatchery at Chak Sherewala village near Muktsar.

Another benefit of fish farming is low dependence on labourers. Punjab has largely been dependent on migrant labourers from Bihar for its large-scale agriculture production. But with the implementation of the National Rural Employment Guarantee Scheme (NREGS), the inflow of labourers declined. The shortage of labourers has increased the cost of engaging manpower by 216 percent in the last seven years.

When it comes to fish farming, once the ponds are excavated and the farm set up, workers are only required to protect the stock from predators, supply seeds and run aerators and water pumps. “The contractors bring their own people to net and transport the fish. I have only two men working on this 30 acre farm”, Bains points out. Many a time, the contractors are migrant labourers who pool in money for nets and transport and divide the profit made from selling the fish. Thus, fish farming and its trade is supporting small scale entrepreneurs as well.

Reality check on the ground

However, despite all these positives, the situation on the ground is a bit skewed. Of the total area under fish culture, around 80 percent is that of panchayat ponds taken on lease by contractors. This means that the proportion of individual farmers converting their agricultural farms into fish ponds is still very low. In addition, while Punjab has achieved the highest yield per hectare, its total annual production stands at 1,04,014 tonnes, which is much less than the top 10 states.

A major limitation of fish farming is that it requires lot of skill and technical knowledge about the feed, growth cycle of the stock, oxygen requirement and predators. “We had no option but to learn the skill because the waterlogged land won’t let the crops flourish. For farmers of other areas, it’s easier to grow traditional crops even though the yields are becoming stagnant,” Virk says.

Farmers are also at loss when it comes to evaluating the stock which remains underwater. “With crops, a farmer is able to examine the direct impact of a fertilizer on plant growth. Here, you don’t get to know whether the stock is doing fine or not. This not only breeds anxiety but also prevents timely interventions like provision of medicines in case of diseases,” Virk adds. 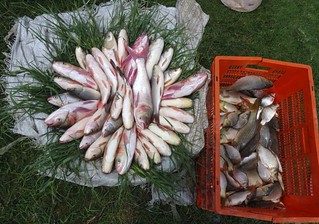 r low penetration of fish farming is loss due to diseases. When diseases strike, small fish farmers are not able to withstand the loss because there is no government scheme for compensating the loss unlike traditional agricultural crops. “Mostly those with big fish farms can sail through as they would still have a substantial stock to book profit,” Bains points out. This explains why village ponds taken on lease by big contractors have been the most successful model in Punjab.

Shortage of seeds and feed is another issue the sector is grappling with. “Though the state has 31 private and government hatcheries, much of the demand is met with supply from Kolkata,” says Dr Asha Dhawan. All these hiccups mean that it is mostly only those farmers facing problems of waterlogging or high groundwater table who are taking to fish farming.

Government pushes for a 'Blue Revolution'

Lately, the state government has announced lot of schemes including a more scientific programme recommending the amount of seeds and dose of feed and fertilizers. The government is also planning to provide fishing nets for farmers so that they can examine the stock from time to time and take suitable measures depending on its growth.

A farmer willing to take to fisheries can avail of a 50 percent subsidy to build ponds. Construction of new ponds costs Rs 3 lakh per hectare while the repair takes up Rs. 75,000. In waterlogged areas of south west Punjab, which has saline water, 100 percent subsidy is being given in four villages with a target of 100 acres in each village. However, since there is no specific variety developed for saline water, the ponds need to be supplied with canal water, which is not easy to come by.

To deal with the cold weather which is not favourable to fish farming, the Fisheries Department is experimenting with polyhouses. A polyhouse would help control temperature and humidity and thus make fish seed available, which will further enhance production.

Fish farming could have failed in Punjab had it not been for the migrant workers from Bihar, who are its biggest consumers. Only 25 percent of Punjab’s native population takes fish that too occasionally as snacks. “Punjabis are not traditional fish eaters and even when they take it once in a while, they prefer boneless varieties which are not bred here. It’s the migrants who are our biggest saviours,” Sandhu agrees.

Catfish, which has the least bones and which is liked by Punjabis, requires a bigger investment. The fish is carnivorous and has to be bred in isolation. The special non-vegetarian feed required for this catfish increases the input cost. “On the other hand, the six herbivores varieties can be bred in the same pond and are favoured by the migrant population. So, a smaller market and higher cost go against the boneless variety,” Sandhu adds. But for the fish farming to expand, new markets have to be explored outside of the state and a processing unit needs to be established.

“We still have a lot of catching up to do when compared to states like Andhra Pradesh and West Bengal, which are exporting their stock. Only when we have a good market infrastructure in place will the traders be able to place orders,” says Sandhu. The state government has commissioned two ultramodern fish markets at Bathinda and Amritsar while a modern fish market is already functioning at Ludhiana. Punjab’s fish may not have travelled the seven seas, but it is definitely out of troubled waters for the moment.

Punjab took to fisheries as an option to diversify from traditional agriculture. While the sector is expanding, it is yet to offer a formidable challenge to the wheat-rice cycle, which is not only draining the state’s natural resources but also pushing farmers into debt.