ARTICLES
From farming to fishing: The journey of the tribals of Dhimbe
The many tribals who were displaced by the Dhimbe dam lost their land but not their livelihoods. They took up cage fish farming and figured out an alternate form of cultivation.

Dimbhe dam is located near the tourist spot of Bhimashankar in Maharashtra. With a capacity of 13.5 million cubic meters, the dam displaced 1253 families, submerged 11 villages and partiallly affected another 13 villages when it was completed in 2000. Today 19 villages are situated on the fringes of the Dimbhe reservoir, which provides irrigation to about 14,000 hectares of land. Farmers affected by this lost their agricultural lands and were left with very few options, which included going off to nearby cities to look for jobs. That's when Shashwat, an NGO based out of Manchar working in the area for improvement of livelihoods in a few villages came into the picture.

A fisheries cooperative is formed

Shashwat had been toying with the idea of bringing the people together to form a sort of cooperative by which they could create an alternate form of livelihood for the displaced tribal farmers. That's when they came upon the idea of forming a fisheries co-operative and rearing fish in the dam reservoir. 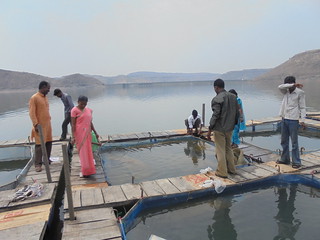 The Dimbhe Jalashay Shramik Adivasi Machhimar Sahakari Society Maryadit, Digad was set up in 2006. Per the Fisheries Department, fish seed totalling Rs. 9 lakh and 9000 fingerlings costing Rs. 3.80 lakh were to be put in the reservoir in the first year itself. Upon the request of the Fisheries Society, Shashwat submitted a proposal to the Tribal Development Department (TDD) for a grant of Rs. 5,37,360 towards the contract amount, security deposit & fish seed cost.

They were sanctioned Rs. 3,79,900 towards fish seed cost and Shashwat arranged for Rs. 41,003 as beneficiary contribution from SWISSAID. It took 3 years for the Fisheries Department to supply all the fish seed. "Together we have harvested up to 27 tonnes of fish annually and are poised to break even within the next 3-4 years", says Anand Kapoor of Shashwat.

Fish rearing cages have the dimensions of 3m X 3m X 3m. Budhaji Damse, who works with the Co-op and Shashwat says that this is the ideal dimension to rear fish. 16 cages together form one set for breeding. Each cage can hold upto 5000 fish seeds for 3-3.5 months. Through the year, 15,000 seeds are grown in one cage alone. 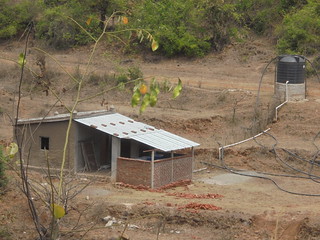 Before cage fishing commenced, the farmers made very little money- some as less as Rs. 30,000 for one crop season. Now, women are also involved in maintaining the cages. In addition, they have tied up with Self Help Groups to teach them about financial management. Since 2006, 214 fisher families have come together in this group.

The mountains around Dhimbe had very little tree cover, which impacted dam life. The soil that was eroded during the rains would accumulate in the reservoir. A test carried out by the Central Institute of Fisheries Education (CIFE) showed that the reservoir water had very little zooplanktons which was necessary for the growth of the fish. The silt deposited had less organic content, which was essential for the good health of the fish. So the tribals started afforestation and planted Sesbania Bispinosa , locally known as Dhaincha, since it is used as manure and fodder for cows and buffaloes. They began to do this before the first rains.

The terrace hills near Dhimbe pose a 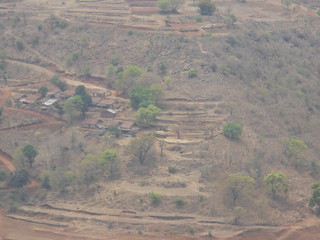 problem for the farmers. The backwaters of the reservoir submerged a lot of cultivable land. While the fisheries co-op was one way to generate liveihoods, the people also wanted to set up an alternative to farming. Instead of viewing the steps of the hills as a hindrance, they came up with a way to use the terrain to cultivate crops, particularly paddy. This is done by terracing the slope of the mountains.

The steps are then consolidated by stone bunds to trap water that is ideal for paddy cultivation. Kusum Karnik, founder of Shashwat suggested this after talking to all the villagers. The farmers came up with an idea of 'Shramdaan' (volunteer labour) and constructed stone bunds on each other's farms. This not only brought the community together but also served as a platform to share problems and issues that they faced. This type of cultivation has resulted in them harvesting two crops a year: paddy from June to September and maize, bajra and jowar from November to February/March.

From farmers to fishermen to what next?

The process of identifying oustees and dam-affected people has made a substantial difference. Government staff would reach villages with a few volunteers from the village and help create records to make the process faster. This has also enabled the tying up of several government programmes for the benefit of the tribals since they were determined to be a part of the process. Visibly, out-migration to towns and cities has reduced or even stopped, in some cases.

The fish farming experiement has been presented to institutes like IIT Bombay and Karve Institute of Social Sciences. The Cooperative has also become a resource house for others who want to learn how to rear fish.

First farmers, then fishermen and possibly teachers/educators in the future!

Get the latest news on water, straight to your inbox
Subscribe Now
Topic
Fisheries
Governance
Voluntary Citizen or Civil Society Sector
Sub categories
News and ArticlesSuccess Stories and Case StudiesVideo, Audio and other Multimedia
Regions
Dams, Barrages and Reservoirs
Maharashtra
Dimbhe
Continue reading
Sign up for our newsletter
A newsletter from India Water Portal for the latest updates around water and related issues in India.
About
Contact
Terms of use
Privacy Policy
Subscribe