ARTICLES
Farakka faces a barrage of criticism
The Farakka barrage is an ageing symbol of our need to control rivers and our inability to do so. Can we do away with it?

The chief minister of Bihar, Nitish Kumar, called for the decommissioning of the Farakka barrage recently. This demand, unlike what may be expected, was not motivated by a love for free-flowing rivers. On the contrary, Kumar believes that with its upstream neighbour Uttar Pradesh usurping all the water from the Ganga, Bihar alone is left with the burden of fulfilling the downstream requirements of the Farakka treaty. If there is no Farakka, there will be no necessity of allowing water downstream; na rahegi baaz, na bajegi bansuri (If the bamboo is destroyed, the flute will not play).

This reasoning is flawed, of course. Whether Farakka stands or not, Bangladesh will continue to be our downstream neighbour, and it is important to ensure that adequate water flows into the Ganga for the sake of the country and the ecosystem of the Bay of Bengal.

But what purpose does the Farakka barrage serve? Would we be better off without it?

To flush out a port: The story of the Farakka barrage begins a century before its construction. It was when the East India Company set up their headquarters in Kolkata that the navigability of the Hooghly River became a matter of crucial importance. Problems with shifting river channels existed even then, this being a natural action on the part of these silt-laden rivers. Since the middle of the 19th century, there have been deliberations of bringing in water from the Ganga to flush out the port.

This idea took concrete form in 1957, when the government of India appointed a consultant to look into the problem of siltation of the Kolkata port. Construction on the barrage began in 1962 and was commissioned in 1975.

Besides not preventing siltation, the Farakka barrage has led to a great deal of what might be termed 'collateral damage'.

Introducing Dhuliyan: It is important that we all take a moment to appreciate Dhuliyan, an ancient town on the banks of the Ganga. William Stevenson's Imperial Gazetteer notes that in the late 19th century, Dhuliyan was “the site of an annual fair and one of the most important river marts in the district, being the seat of a large trade in rice, pulses, gram ,wheat, and other food grains.” It was a prosperous little town with its weekly market having business of Rs 50,000 and famous for the manufacture of 'locks, nails, and betel-nut cutters'. Today, Dhuliyan remains a prosperous and densely-populated town with a population of 2,30,022 people as per Census 2011. The official website for the town states that “Dhuliyan is a quiet town with people having riverside lifestyle. Local people of this place spend a lot of time on the river and by the river side”.

Dhuliyan is a good place to visit. But Kalyan Rudra, a geographer who has been studying Farakka and its implications, points out in his report The Encroaching Ganga and Social Conflicts: The Case of West Bengal, India that this centuries-old town is likely to disappear into the Ganga in the next few decades.

Floods, erosion and more: The Farakka barrage affects the upstream and downstream differently.

Upstream of the barrage, the river is flanked on its right by the Raj Mahal hills. This causes the river to tend towards its left, away from the obstruction, eroding its left bank in the process. The district of Malda, on the left bank of the river, has been flooding regularly for decades. This flooding has been further increased by the impoundment at Farakka which has greatly increased the sedimentation at the barrage, thus causing a rise in the bed level and changes in the gradient of the riverbed. The government of West Bengal acknowledges the role of the barrage in the inundation of Malda. The 13th legislative assembly stated, “It is accepted at all levels that the construction of Farakka barrage is solely responsible behind the erosion of River Ganges in Malda district.”

Downstream, the residents of Murshidabad are not well off either. The Ganga river has been steadily eroding its banks downstream of the barrage--206sq km of land was eroded from Murshidabad district between the years of 1988 and 1994.

The wishes of the Ganga: Environmentalists have been speaking for years about the negative ecological and social consequences of the Farakka barrage. It has also been a bone of contention between Bangladesh and India with each country convinced that the other is getting the better of the Indo-Bangladesh treaty for sharing of waters at Farakka. This was highlighted when Nitish Kumar called for the decommissioning of the barrage. At the same time, the barrage has many proponents who speak of the importance of continuing to try to control sedimentation in the Kolkata port.

As it turns out, the decision may not be up to us after all.

The leftward tendency of the river as well as the changes in cross-section has a serious consequence. If the Ganga continues on its present course, it may soon outflank the barrage altogether. There are signs at Panchananda, a few kilometres upstream of the barrage, that the river is inclined towards one of its older channels.

In this case, we might not have a choice about whether to accede to Kumar's request or not. The choice may well be made for us as the river leaves its present channel for one of the older ones.

What will be the impact of this?

Life after the barrage: In the long term, a free-flowing river will mean stability in the region. There is evidence that a dam or barrage, especially in the case of a silt-laden river like the Ganga, exacerbates flooding upstream and erosion downstream of the structure. This is precisely what we are witnessing on the Ganga. There is, therefore, an indication that the damage along the banks of the river will be reduced if Farakka is decommissioned. 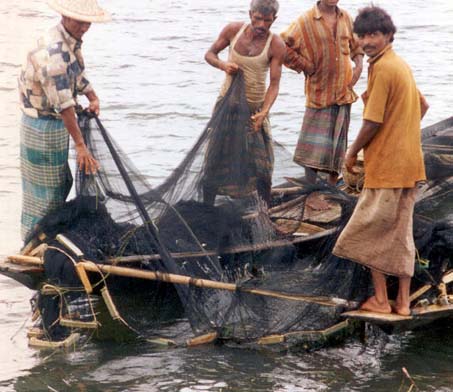 The harvesting of Hilsa constitutes 1 percent of Bangladesh's GDP. Parineeta Dandekar of the South Asia Network on Dams, Rivers and People (SANDRP) has written that this economically and socially important fish has drastically declined due to the Farakka barrage. Restoring longitudinal connectivity in the Ganga will drastically increase the reach of Hilsa. This will not only restore the livelihoods of the fisherfolk up to Allahabad, which was once the upstream limit of the Hilsa's territory, but also increase the population of gharial, birds and other predators.

Another major impact is that of salinity of the Bay of Bengal. Reduced discharge in the Ganga due to the barrage has increased both salinity and sedimentation in Bangladesh. Monirul Mirza, a physical scientist working on environmental security and adaptation, states that this salinity has had negative effects on agriculture, forestry, industry and drinking water in the southwest region of Bangladesh. These effects will be negated with the removal of the barrage.

The short-term effects are likely to be devastating.

Near the Farakka barrage, the river passes through some of the most densely populated regions in the world. The population densities of the Malda district, Murshidabad district and Bangladesh are all over 1,000 people per square kilometre (compared with India's population density of 382 people per sq.km). Removal of a long-established dam such as the Farakka barrage needs to be looked at as a disturbance to the system and comes with some negative effects. Increased sediment load will lead to a greater disturbance downstream than is presently observed. These changes have been proved to be temporary, but in a densely populated area, it will cause damage to land and property until the system regains equilibrium.

Do we have a choice? There are now three scenarios open to us. River Ganga may outflank the Farakka barrage, India may decide to decommission it or the status quo may last till the barrage collapses due to age. Either way, there will come a time when we are faced with the removal of the barrage. In the preceding section, we have touched upon some possible impacts of the removal. We can only speculate because the impacts of the removal of such a large dam, on such a mighty river, located in such a densely populated region, has not been experienced before.

The largest dam removal so far has been on Elwha, a 73km-long river with a discharge of 42.6 cum/sec, when the Glines Canyon dam was removed. This dam was 64m high and around 137m long. The Farakka barrage is 2,240 metres long and located on a 2,000km-long monsoonal river with an average discharge of 12,037 cum/sec.

The removal of Farakka will be treading new ground, in more ways than one.