A cut above the rest

Manu Moudgil
05 Dec, 2016 . 4 mins read
A community reserve in Punjab has precious lessons in conservation for other wetlands which are facing ecological crisis.

Keshopur, a favourite of native and migratory birds in Punjab.

Deot Masih’s family has been extracting lotus root from the marshy land in his village near Gurdaspur for several decades. Delicate and crunchy, the edible roots are in high demand going as far as Srinagar in the north and Delhi in the south. Similar is the case with chestnut grown in this swamp. Besides being of economic value to the locals, the natural body has emerged as a favourite lodging place of migratory birds that prefer it over some of the more famous wetlands.

Known as Keshopur-Miani Community Reserve or ‘Chhamb’ in Punjabi, the land is just 12 km from the Indo-Pak border and right in the middle of the Ravi and Beas rivers. It is believed that the area must have been a flood plain of the two rivers before barrages and dams tamed their spirals. Now rain and groundwater feed the land. The 850-acre-marsh was home to over 25,000 migratory and native birds during last winter.

The envious health of Keshopur at a time when three famous Ramsar sites of Punjab--Harike, Ropar and Kanjli--are battling pollution and encroachments emphasises the need to involve locals to protect natural hot spots.

The low-lying area is a departure from usual wetlands as it is not fed by any river and hence has no industrial or domestic waste entering its water. It is also the first-ever notified community reserve of India, coming soon after the concept was introduced in the Wildlife Protection Act in 2002. This means that the locals and the forest department jointly manage the wetland and the ownership rests with the five villages. The reserve management committee oversees its operations, including giving out leases for fish ponds and lotus and chestnut farms. All the five villages are represented by one nominee each while a range officer represents the forest department. A change in the land use pattern can only be made through a resolution passed by the management committee and after the approval from the state government.

What makes this arrangement tick is the hope that more birds waddling in the waters will bring more tourists to the area. The Punjab government has plans to promote the community reserve as an eco-tourism destination and has already submitted a proposal to the Centre under the Swadesh Darshan Scheme.

Farming to save wetland

The fact that all the other people-owned wetlands in the region have been filled up due to development activities underscores the conservation values that the residents of these five villages have imbibed with the guidance from the forest department. “There were around seven other wetlands in the region which have slowly degraded as the villagers filled them and started farming,” says Geetanjali Kanwar, a field researcher with WWF-India studying biodiversity in rivers and wetlands of Punjab. 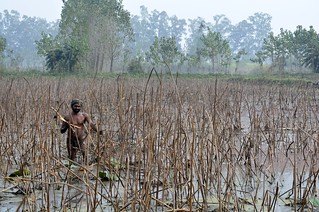 A drain has been constructed at Kahnuwan Chhamb to take out the water and a vast area is now under wheat cultivation. The oxbow lake at Macchiwara has been reduced to two-third of its size due to encroachments and infestation of water hyacinth.

The villages of Keshopur Chhamb also tried to take over the marsh when the rains failed for a couple of years. Commercial fish farming started around that time. But nature reclaimed some of the lands after the first showers and then the foresters moved in with their conservation plan.

Amarjit Singh, block officer with the forest department, recounts the difficulties in convincing villagers for the community reserve. “We started talking to them in 2007. There was always a group which opposed the proposal, but then we clarified that it won’t impact the existing money-generating activities the villagers are indulged in,” he recalls.

A major concern of farmers was the birds damaging the crops. “We informed them that there are only a couple of species which go for food grains and once they start getting enough food from the wetland itself, they won’t damage the crop. The benefits of a wetland on environment and groundwater table were also highlighted to get them on our side,” Singh recalls.

The villages also gained in the form of development funds from the government for construction of bus stops, roads, drains and sewing classes for women. “The area was not of much economic value to us anyways. With the intervention of forest department, we also got employment as guides and labourers. Now, more people are expected to come here as its popularity rises,” says Naseeb Masih, a field worker at the reserve.