A bridge on the river Kosi

Chicu Lokgariwar
03 Aug, 2014 . 8 mins read
To reduce the cost of building a bridge on the Kosi, the Bihar govt. set aside the recommendations of its committee. The decision may not have saved money, but the shortcut has destroyed 57 villages.

A boy stands outside his home on a spur

It is difficult to make small talk with a woman who has lost her all.

Khair-un-Nissa had generously invited me to her home for a meal, a curry made of the famously succulent Black Haringhata hen, no less. The curry was special but it was her house that impressed me most. The bamboo and straw structure boasted a fresh coat of clay. The area was so scrupulously tidy that I felt refreshed the minute I entered the courtyard. Normally, I would be gushing with compliments; in this case a compliment would be tactless.

This hut, pleasant as it was, was not what Khair-un-Nissa and her husband Mohammed Iqbal Hussain were used to. Till 2010 they had a mansion, a prosperous 100- acre farm, several buffaloes and mango orchards in the beautiful little village of Banainiya. Their children went to the village school. The future held promise. The women led a life of dignity and security. With the construction of the East-West Corridor, of which NH 57 is a part, they were expecting a better turn of events, even prosperity.

Connecting Guwahati on the East and Porbunder to the West, the 3,300 kilometer long East-West corridor cuts across the country. It is a major trade highway and is designed with the purpose of carrying freight. Near Bananiya, construction of the highway involved building a bridge across the mighty Kosi river. As it did with at least four other bridge contracts for the Corridor, the National Highways Authority of India gave the contract to Gammon Infrastructure. Khair-un-Nissa and Iqbal were among those who believed that the bridge and the highway was the state’s way to bring them the benefits of development. All that changed at midnight on 17th August 2010 when their village was swept away along with 56 other villages.

A people who thrive in floods

The people of Bihar are well accustomed to floods; they welcome these annual inundations for the increase in soil moisture and soil fertility. During the annual floods, the water gently spreads over the land to recede a day after.  This mellow inundation neither damages the fields nor carries away people. Nothing had prepared Iqbal and the other villagers for the ruthlessness with which the water rushed in that night and swept away their lives. 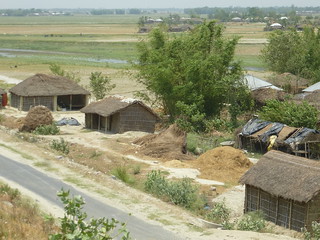 Manik Lal Mandal of Parwaha- a village he describes as once overflowing with milk and dahi- tried to explain how it was that night. 'Usually', he explained, 'when the waters started rising, people came to know the day before. They would spend all night moving any valuables they could. But that day, there was no such warning. The waters rose suddenly and all the animals were in danger. People tried to rescue the ones they could, and offered high rewards to the people who could save their cattle. In the end people were giving away their animals to whoever could prevent them from being drowned.' This detail of being forced to watch their beloved buffaloes drown has scarred the people of Parwaha. Today, the 1,200 families are scattered around the area in several nearby villages and along the roadside. Iqbal, Khair-un-Nissa and their children found themselves camping on the highway that they had once thought would offer them prosperity.

Why was this flood different? The answer to this question lies in a simple fact that any child knows. Constrict flowing water in any manner and it makes up for the loss in width by increasing the force with which it flows. This can be used to advantage while watering plants with a hose, but can have disastrous consequences when applied to rivers. Traditional wisdom of the Gangetic plains warns against tampering with the riverbed. Do so, the elders warn, and the river will avenge your efforts to control her. A plainly stated warning, one that residents here know is not to be disregarded.

A few metres above Banainiya, the Kosi used to flow in four channels spread across a width of 11 kilometers. The four channels would form and reform braids, moving about at will. Such is the temperamental disposition of the river the National Highways Authority of India intended to bridge.

A Technical Committee was appointed to examine this proposal. Not in one of its seven meetings did the committee deliberate the human cost of this bridge. This was no casual oversight, given that at the time of the 2001 census, 304 villages with nearly a million people existed within the embankments of the Kosi. A reading of the Technical Committee’s report reveals that as far as it was concerned, the NH57 bridge was being constructed in a sterile world with nary a living thing around it.

The discussions were purely technical 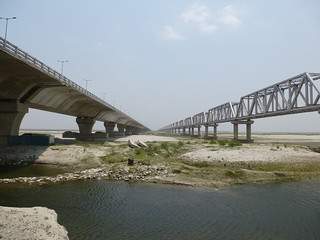 and culminated in the design of a bridge with a waterway 1,853 metres wide, about a tenth the width the Kosi was accustomed to spreading itself. In the design of a bridge it is critical to estimate accurately the rise in the flood level of the river upstream of a bridge, a natural result of obstruction to natural flow caused by the construction of that bridge. Engineers call this ‘afflux’.

This time around, the Techinical Committee estimated that for the finalised span, an afflux of 1.35 metres up to a distance of 8 km upstream could be expected. Their estimate assumed water flow at 22,375 cumecs (cubic metres per second).

This was unacceptable to Bihar’s Department of Water Resources. The commissioner and secretary of the department and the director of Central Design Organisation each separately communicated to the Technical committee that the waterway needs to be increased to minimise the afflux. They warned of serious consequences if this was not done. CWPRS estimated that a span of about 10.3 kilometers will cause near-zero afflux while a span of 4.75 kilometres will reduce the afflux to a manageable 0.25 metres.

The story of a bridge on Dipity.

One decade after these deliberations, it is difficult to understand the reasons 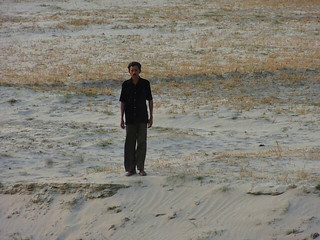 for this decision. Why was this made? The paper trail of correspondence and meeting minutes reflects abrupt changes in decisions, with no explanations offered. It is tempting to conclude that NHAI and Gammon wanted to reduce the cost of construction, but there is no evidence to support such a speculation. The evidence of its horrifying consequences, however, is beyond speculation.

While the bridge was still being built, the monsoon of 2010 arrived. On 17 August, the flooding was not as intense as it could have been, with the maximum discharge that day recorded at 4,250 cumecs . This modest flood had an impact far beyond what the CWPRS had estimated for a flood of five times greater in magnitude. An afflux 3-4 metre high reached villages 15 km upstream of the bridge. The Kosi breached the Eastern Afflux cum Protection Embankment, washed off a segment of NH-57 bridge approach in the flood plains and part of the eastern guide bund down stream of the bridge. All this rendered 50,000 people homeless.

Following this disaster, Iqbal and his family were benumbed and unable to think beyond mourning the loss of their home and their dreams. The lands they farmed were gone, their children's schools had been washed away. The indignity of living in a shack with no access to a private toilet, no schools and no hope soured the family's interactions with each other and with others.

However, Iqbal and his comrades in displacement soon rallied. Two people were instrumental in helping them cope with the circumstances and form a strategy for a sustained fight. Narayanjee Chaudhary of the Mithila Gram Vikas Parishad and Dr. M.B. Verma (former Distinguished Scientist, DRDO) visited the villages often and gave what help they could. Not only did they offer pertinent suggestions but also offered moral support. As Iqbal later said, 'We felt as if people were with us.' The Kosi Mahasetu Pidit Sangarsh Samiti was formed in 2011 and Iqbal accepted the role of the treasurer. They have written letters to government agencies, filed court cases, staged demonstrations and not lost hope.

Since 2010, Iqbal and Khair-un-Nissa have come a long way. They still live on the embankment, but their punctiously neat kaccha house is a sanctorum of dignity. Iqbal now works with a CRY project designed to help children deal with displacement. There is some financial security and also the satisfaction of doing his bit for fellow villagers.

The Sangarsh Samiti remains active in its quest to ensure that those displaced by the bridge are rehabilitated but has just received a big blow. Disappointed by the Patna High Court's handling of the case that merely required NHAI to take notice of the petitioner's claims without mandating that the claims be satisfied, they appealed to the Supreme Court. However, on Friday August 1, 2014, the Supreme Court dismissed the case on the plea that there has been considerable delay between the incident occuring and the appeal; a punishment for the Samiti because it followed the processes of the law that resulted in the delay.

Iqbal and Khair-un-Nissa's eldest son is now apprenticed with a tailor; his father has learnt a bitter lesson about the dangers of tying one's profession to one's land.

Iqbal bears no grudge against the bridge. “Railways and roads are good”, he said. “But we are now paying taxes on lands that are buried under sand and water, our families are scattered, our women are harassed, our children don't have a future. Does the right to life not include us”?

In 2013, Gammon was hailed as India's most admired construction company.