Poisonous cocktail in the Cauvery

Divya N
20 Oct, 2014 . 5 mins read
Leachate from thermal plants in Mettur flows straight into the Cauvery river polluting cotton fields along the way. What else is this affecting?

Mettur is now home to many ash ponds

Mettur, a lush green valley town near Salem in Tamil Nadu, is most famous for the Mettur Dam and the Cauvery river, which originates at Talakaveri, in Kodagu, Karnataka. A largely agricultural town, Mettur's move to industrialisation happened in 1936 when Mettur Chemicals set up India’s first caustic-chlorine factory above the Stanley Reservoir.

Here, on the banks of the Cauvery, are many cotton fields. The peculiarity of these fields is that the cotton plants look as though they are growing on ash and not on soil! What has caused this?

Mettur Thermal Power Station acts as one of the base load power stations for the Tamil Nadu Electricity Board (TNEB) and is operated by the Tamil Nadu Generation and Distribution Corporation (TANGEDCO). Running since 1987, its total capacity is 1440 MW made up by four units of 210 MW each and a fifth unit with a capacity of 600 MW. The coal used in these plants are from Mahanadi Coalfields Limited (Odisha) and Eastern Coalfields Limited (West Bengal).

Chemplast is a chemical company based in Chennai, Tamil Nadu with manufacturing plants in Mettur and Cuddalore. Many of the raw materials used, products manufactured, and by-products formed in these plants fall under the category of sunset chemicals, which are either slotted for global phase-out or for regulatory action. The production of such chemicals leads to contaminated environments requiring remediation, or health damage requiring compensation and medical care. The company also has a coal-fired thermal power plant with a capacity of 48.5 MW, which has been operational since 2010. The illegal coal yard constructed at the Mettur Dam railway station for this plant is located less than 30 meters from the Green Park locality that has been severely affected by coal dust.

Malco Energy limited is part of the Vedanta group of companies. It produces aluminium, copper, zinc, lead and iron ore and also commercial energy. Malco Energy Limited is one of the private sector power suppliers in Tamil Nadu, with a power generation capacity of 100 MW from four units of 25MW each. Malco also has its coal yard in the premises of Mettur Railway Station, next to Chemplast’s coal yard and less than 100 meters away from the residential area of Green Park.

Impact of toxic run-off on people and crops 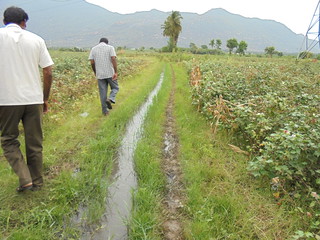 The soil in the fields now has a dull grey colour with no sign of brown. This is due to the fly-ash emitted from the power plants. Also, the leachate from the ash pond of the thermal plants flows through these cotton fields. According to locals, due to the flyash in the air and the ash/toxic heavy metals in the leachate, the overall yield of cotton has decreased over the years. Ideally, each plant must have 90-120 buds in order to be called one with good yield, but the plants in these fields have only about 30 buds each.

The ash ponds for the thermal plants are located at various points of the valley. The leachate from the first pond collects into the next, leaving solid ash behind. This process continues until it reaches the last ash pond and then goes directly into the Cauvery river at Sangilimuniappan Koil. The locals say that there is 1-2 feet of ash in the river bed. The women working in the fields complain of frequent rashes and burning sensation on their skin because of working in the fields flooded with the leachate. 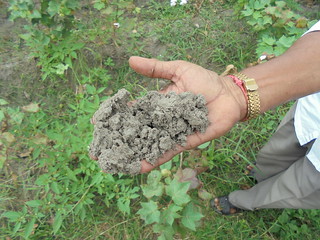 Destruction of the environment in Mettur

The presence of Industries in Mettur has lead to the heavy contamination of air, water and land. It has taken a heavy toll on the farming and fishing communities as well. Groundwater has been severely contaminated with several borewells being rendered unusable. Water from the Cauvery is used for all domestic purposes in Mettur. The locals, however feel that the water is unfit for drinking because they see the leachate mixing with the river everyday and are therefore apprehensive about using the river water for domestic purposes.

According to Nityanand Jayaraman, an environmental activist and writer based in Chennai, "Inland thermal power plants place a massive load on freshwater resources. The Mettur plant, for instance, has permission to draw up to 75 cusecs of water (184 mld). Even at a conservative estimate of 4 m3/hr of consumptive use for every MW generated, the Mettur plant with its 1240 MW installed capacity will consume about 110,000 litres of water every day".

He adds, "Water that is used to transport ash to the ash dump will find its way down to the Cauvery by gravity contaminating groundwater supplies and farmlands on the way. The ash-tainted water that ends up in the Cauvery is likely to cause the bioaccumulation and biomagnification of toxic heavy metals including mercury in river fish that may be consumed downstream."

Simply put, it means that the continuous discharge of toxic effluents into the Cauvery poses a grave threat to drinking water installations, fish consumers, as well as consumers of agricultural produce in the area. Studies have shown that 15 toxic chemicals are at levels higher than recommended and 52 other toxic chemicals with known harmful effects are present in these water resources. It is not only the presence of these individual chemicals but also the synergistic action with multiplied toxicity that could potentially form a poisonous cocktail with bitter consequences.