Cleaning up From Canada to Kharaudi

In 2003, President Dr A. P. J. Abdul Kalam visited a small village in Hoshiarpur district of Punjab. Kharaudi had done something he thought others could emulate. It had concrete roads, parks, a library, street lights running on solar cells and a septic tank to treat village's sewage - all thanks to rich Non-Resident Indians (NRIs) of the village who thought that this was the best way to pay back to their place of birth.

The project was first of its kind not only in Punjab but also in India. Soon, many NRIs from Punjab began emulating this example and adopted their villages. The President was so impressed with the developments that he narrated Kharaudi’s success story during many of his public addresses.

Sadly, ten years down the line Kharaudi seems to have lost the plot. The treatment plant is defunct and the villagers don't want to pitch in for its maintenance. The independent committee, formed to manage the development work, lies defunct due to allegations of misappropriation of funds. The villagers are also at a loss when it comes to disposing off the treated wastewater coming out of the septic tank. Thankfully, Kharaudi inspired many villages and fortunately most of them have done better than the original model.

How it all began

It was in late 1990s that Dr Raghbir Singh Bassi and Dr Gurdev Singh Gill, born in Kharaudi but settled in Canada, decided to do something about the squalor and filth in their village. The habitat would turn into a cesspool during the monsoon with stagnant water, overflowing drains and waste piling up. The duo approached other NRIs from Kharaudi and sought donations.

Around Rs.50 lakh was collected of which around Rs. 20 lakh was donated by Dr Bassi and Dr Gill. The initiative moved the state government, who then decided to make a matching grant. So Kharaudi got a total of Rs 1 crore for development work. Villagers mainly contributed through voluntary labour and provided free transportation of construction material on their tractors. 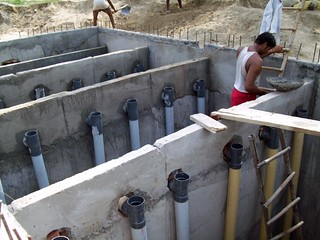 Four parks were developed, concrete roads laid and 22 solar lights installed. A cultural centre, guest house and a couple of computers for students were also added. Since insanitation was the biggest issue the NRIs wanted to deal with, two septic tanks, which could treat the village’s sewage, were constructed and sewerage lines laid. Open drains were covered and all the houses were connected through sewerage lines taking the wastewater through gravity to the septic tanks. Such a provision also motivated those defecating in the open to construct toilets in their homes. A Village Life Improvement Board (VLIB) was formed comprising elected panchayat members and other residents to oversee maintenance.

Kharaudi was hailed as a new participatory model of development. Dr Bassi and Dr Gill, who initiated the work, started Village Life Improvement Foundation (VLIF), which has till now helped around 10 villages script similar success stories while work is on at other five villages.

Ten years since the inauguration of its development plan, the treatment plant is lying defunct. The independent committee, formed to manage the development works falling beyond the purview of panchayat, also lies defunct due to allegations of misappropriation of funds. Villagers are also at a loss about disposing off the treated wastewater coming out of the septic tank. It is made to stand in a pond for ultraviolet treatment but they don’t have any use for this water as there are no fields nearby and good irrigation water is easily available.

Since the treatment plant is not functioning for the past few months, the pond is full of untreated wastewater now. Instead of getting the plant repaired, villagers are in favour of taking the sewage out of the village.  “We are more interested in dumping the sewage to some far off area because that seems to be a permanent solution,” says a villager Iqbal Singh. In fact, the residents have already identified a 5 kanal land worth Rs 8 lakh near the fields where the sewage can be dumped by laying more pipelines.

However, instead of making things work among themselves, they are again looking for funds from NRIs and the state government. The initiators now feel they missed on an important component for development works. “I guess what we did wrong from the very start was not building community ownership of the work done. Since the NRIs and government pooled in the money, people remained just the users than participants. Some amount of usage fee should have been made mandatory so that maintenance is possible,” says Dr Bassi.

Thankfully, some of the villages which followed Kharaudi did not make the same mistake. 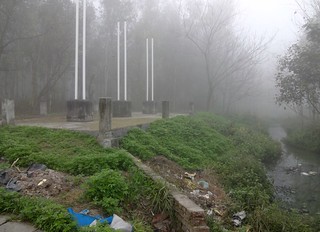 The copycats make it work

Langeri, which is nearby to Kharaudi, is one of those. Around 20 NRIs of the village raised Rs 32 lakh. The matching grant from the state helped the village get piped water supply, a sewerage system and concrete roads besides parks and solar street lights. The village’s life improvement board charged Rs 2,000-3,000 from every household for a sewer connection.

The board, with its 10 members, is still very active and ensures participation of residents. “Involvement of people in the work helps not only in ensuring community ownership but also reduces chances of corruption and poor work. We make sure that even the poor who can’t contribute financially, put in labour during construction or repair works,” says Manjit Singh, one of the board members in the village. At Brahmpur in Ludhiana district, which was the second village to adopt the Kharaudi model, residents regularly pay Rs 90 as charges for water and sanitation facilities.

But none of the villages have yet been able to make good use of the greywater. Most of them have small streams flowing nearby and water from the septic tank is simply diverted there. Others like Kharaudi are not sure how to dispose of the water other than letting them into fields, which is not possible throughout the year as farmers prefer to irrigate their fields through canal or tubewell water.

VLIF has given a considerably good model of development as compared to the conventional one given by the government. It has not only ensured universal benefits irrespective of caste and financial status but also led to better utilisation of funds as there is deeper involvement of people and officials. VLIF takes Rs 1 lakh as a fee from the interested village for a preliminary survey regarding their requirements and budget estimates. Later, it facilitates the process and offers technical assistance, for which the foundation is paid 3% of the total cost under the scheme. Villages are also free to hire any consultancy agency to get the work done.

The question remains whether this model of development can be replicated in other states to improve sanitation. NRIs and good water supply to serve the house-based toilets are important components of this model, both of which are abundant in Punjab. Hand holding, as done by VLIF, can deal with deficiencies often felt by villagers in financial, technical and managerial capacity. Promoting similar models in other NRI-rich states like Gujarat and Kerala may be a good starting point.