ARTICLES
A city pond of its Aayi
Aayi Kulam in Puducherry is not just a pond that does its job of recharging the groundwater. It is a slice of history that needs to be preserved.

Muthirapalayam has figured prominently in Pondicherry’s water supply map for a couple of centuries, dominating especially during the French regime. Though the burgeoning population has necessitated the commissioning of alternate supply routes and source wells, the story of Muthirapalayam is like no other.

Legend has it that the Vijayanagar king Krishnadevaraya was travelling through Ozhukarai (presently the Oulgaret municipality) to meet a nobleman, Uyyakonda Mudaliar. On his way, he happened to cross a particularly well-kept, well-lit mansion which he mistook for a temple and prostrated before it. It was not a temple but the local devadasi, Aayi’s house. Outraged at the king’s apparent disgrace, devadasi Aayi promised to tear her building down and construct a pond in its place for the village to benefit from.

When the French settled here, a surveyor was sent to scout for good drinking water and he zeroed in on Aayi Kulam. A simple pulley lift arrangement was put in place and the water was channeled out 7km away to quench the town’s thirst. Fascinated by the history behind Aayi Kulam, the French, during the rule of Napoleon III, decided to commemorate Aayi and her selfless gesture by erecting a monument in her memory at the heart of the French quarter. 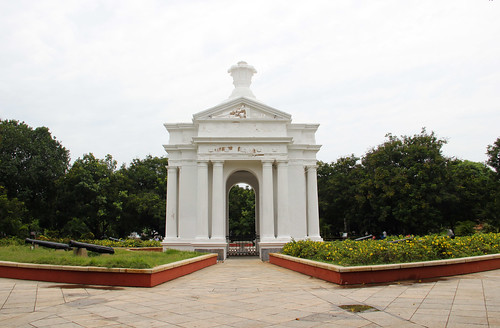 Aayi is not Puducherry’s lone philanthropist. Devadasis Bangari, Oosi and Singari were also instrumental in taking up welfare projects. Aayi’s sister Oosi is supposed to have renovated the massive Ousteri Lake, spread across Tamil Nadu and Puducherry while Bangari was responsible for the construction of the Bangaru Vaickal which channels water from the Pennaiyar river into the Bahour cascading tank system. Stone inscriptions and, more recently, French Institute of Pondicherry’s epigraphist Dr Vijayavenugopal’s work have helped cement these as facts and not merely figments of one’s imagination.

Ousteri, Bahour Lake and the Bangaru Vaickal are robust and functional. For a place so steeped in history and in a territory which vigorously celebrates its heritage, the present condition of Aayi Kulam is painfully deplorable.

Puducherry was home to over 200 such ponds and around 87 eris or irrigation tanks. But several of them have gone missing over the years. As the population grew, so did the need for resources. Borewells were dug indiscriminately across the city and its outskirts, severely affecting the groundwater table. While groundwater could be accessed at around 25 to 60 feet in the 1970s, it cannot be found anywhere below 150 and 200 feet today.

“Few decades back, Aayi Kulam was used as the local Mariamman temple’s Theppa Kulam or pond for ceremonial use. During festivities, temple deities were brought out to the pond and people gathered around to celebrate. But that’s ancient history. Now, no water, so no festivities. Indiscriminate borewell usage has depleted groundwater considerably and with no arrangements for recharge, most ponds remain dry and eventually get filled up,” remarks Aravindan Govindassamy, a long-time resident of Muthirapalayam and member of Pondy-based environment organisation, Sembadugai Nanneeragam. 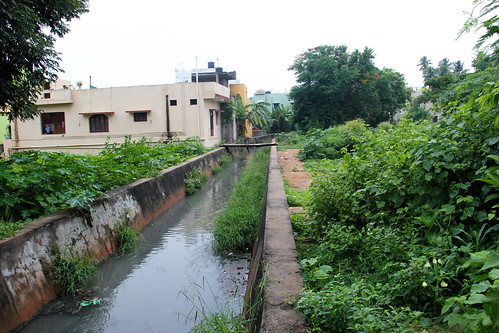 The Aayi Kulam has several unfortunate companions. The Ezhu-Eththam Kulam has mutated into a garbage dump; its ayacut is now occupied by a sprawling medical college and a government school. The Poyya Kulam which never ran dry is nowhere to be found today. Aravindan blames policy makers, greedy politicians and residents alike for the current situation. Catchment areas are being encroached and built upon leaving very little space for water to travel both above and under the surface.

Groundwater recharge is one of the main functions of village ponds. As peri-urban gobbles up the rural, open spaces and water sources become aberrations in the concrete landscape. And, the case of Aayi Kulam is particularly distressing as it is a piece of history in ruins. Houses have come up in poromboke (public) lands on the pond’s fringes and no questions are raised. A channel carrying the area’s sewage passes right along the pond while wild plants have taken over the kulam’s periphery.

The previous N. Rangaswamy-led government had promised to act on the issue, but it never happened. “Official interest in keeping such a historical place in good health is completely lacking. It is purely because of efforts of individuals and organisations like the Sembadugai Nanneeragam that the pond still stands. Else it would have been filled up long back and you’d now be greeted by a row of houses in its place,” rues Aravindan.

While a monument celebrating Aayi’s contribution stands tall in the heart of Pondicherry’s White Town, her pond rots in Muthirapalayam. Here’s hoping Pondicherry comes together yet again to save its crumbling heritage.

Get the latest news on water, straight to your inbox
Subscribe Now
Topic
Technology
Lakes, Ponds and Wetlands
Climate and Weather
Rainfall and other forms of Precipitation
Surface Water
Urban Water
Sub categories
News and Articles
Regions
Political
Puducherry
Continue reading
Sign up for our newsletter
A newsletter from India Water Portal for the latest updates around water and related issues in India.
About
Contact
Terms of use
Privacy Policy
Subscribe