Golden city around the pond

Manu Moudgil
29 Mar, 2015 . 4 mins read
Amritsar is as famous for the 'sarovar' surrounding the Golden Temple as it is for the Harmandir Sahib itself but how much do you know about this water body, which has a capacity of 31,000 gallons?

A devotee takes a dip in the holy sarovar

Vibrant colourful clothes, spicy Punjabi food, a cacophany of sounds from the streets and then, serenity inside the Harmandir Sahib complex. Amritsar, a city of contrasts, and one that tests the senses constantly, is home to the holiest shrine of the Sikhs popularly known as the Golden Temple.

For everything that you might already know about Amritsar, did you know that it is, in fact, the pond which gave the city its name? 'Amrit' means the nectar of immortality and 'sar' or 'sarovar' means pond. Amritsar, which dates back to the 16th century was founded by Guru Raam Das, the fourth spiritual master of the Sikhs. It is thanks to him that the sarovar, which is supposed to have healing powers, was excavated.

The power to transform

Water's properties, which let it cool down and heat up more slowly and gradually than solid building materials, is what lends a pleasant atmosphere to the Golden Temple complex throughout the year. With a perspective on design, the sarovar visually etherealises the building bulk of the shrine. Eminent architect Dr S S Bhatti who has written a book on the Golden Temple says that the shimmering reflection of the shrine signifies the importance of spiritual life within the material world. "A lifeless object takes on the pulsating sparkle of the subject and there is an instant transformation of the devotees' psycho-emotional make up", he writes.

Surprisingly, this deep love with water does not leave any dampness on the shrine. “The foundation goes 16-17 feet deep. Since there was no cement at the time that it was built, lime mixture was used to plaster the walls built with slim Nanakshahi bricks. Lime is a very good material to guard against water, and this might be the reason that the shrine does not become damp," says Dr Bhatti. 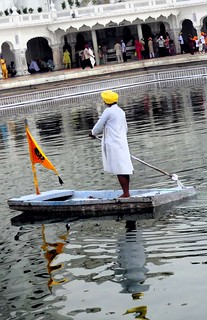 Water supply to the sarovar

The sarovar, with a capacity of 31,000 gallons, was earlier dependent on rainwater and would dry up in the summers. During the British period, it was connected to the Upper Bari Doab canal of the Ravi river thus ensuring year-round water supply. A network of ingeniously-designed tunnels facilitates the easy and free flow of its water at all times. In addition, a part of the water supply comes from tubewells installed in the Golden Temple complex.

In 2004, a devotee donated a state-of-the-art water treatment and filtration plant for the sarovar. The water that flows into it is cleansed in this plant and aeration ducts which pump continuously, supply oxygen to the sarovar. Though the sarovar is lined by concrete today, its base is still untiled so that groundwater may naturally recharge. Different type of fish keep it free from algae. Wastewater from the washing of floors is disposed off into a drain, which earlier used to lead to city sewers but is now diverted to recharge wells.

Harmandir Sahib gets more visitors than the Taj Mahal, crossing over 1 lakh visitors on weekdays alone. Though it is the holiest shrine of the Sikhs, people from all over the world, irrespective of their religion, pay their obeisance here and experience spiritual camaraderie.

The grand community lunch, called 'langar', run by volunteers and open to everybody irrespective of class, creed or caste remains one of its main attractions. The 'karsewa' (voluntary work) also includes cleaning utensils, serving water and tending to shoes.
In addition to the Golden Temple, the vast gourmet culture of Amritsar and its proximity to the Pakistani border, bring tourists to the city.

Harmandir Sahib was built between 1588 and 1604. However, due to its geographical location, Punjab continuously bore the brunt of foreign invaders. Afghan invader Ahmed Shah Abdali demolished the Harmandar Sahib seven times, the last of which was in 1764. It became popularly knows as the 'Golden Temple' when Sikh ruler Maharaja Ranjit Singh covered its upper floors in gold-plated copper sheets in the 1830s. Regilding was done again in 1999 with the gold and money donated by devotees from all over the world. However, due to the increasing air pollution around the shrine, restoration has to be done every year to maintain the sheen.

The shrine is believed to be a true symbol of secularism with its four entrance doors, which signify that God exists everywhere and that no direction is purer than the other.

How to reach Amritsar

By Train
Amritsar is well connected by rail to almost all major cities in India.

By Road
The city is located on the historic Grand Trunk Road and has good connectivity with Ambala, Patiala, Delhi, Chandigarh and Jammu.