Children of a lesser God

Usha Dewani
09 Aug, 2016 . 6 mins read
Underprivileged children are the most affected by Assam’s annual floods. Their schools washed away and health affected, they also fall prey to nefarious activities.

In what is considered the worst flood in a decade, the flood in Assam this year has swept over 2,800 villages away and submerged more than two lakh hectares of crop. More than 26 lakh people have been affected in 28 out of 34 districts of the state. There have been many casualties, too.

India has the most number of people exposed to river floods in the world. A study by World Resource Institute states that on an average, the river floods affect approximately 21 million people around the world every year. By 2030, this number could shoot up to 54 million due to climate change and socio-economic development.The total flood-prone area in Assam is 31.05 lakh hectares which is approximately 40 percent of the state. It is four times the national mark of the flood-prone area of the entire country. Floods this year in Assam rendered 2,30,000 people displaced. Many are taking shelter in makeshift relief camps, roadsides or embankments.

Disasters, natural or man-made, hit the vulnerable hardest. With thousands of families rendered homeless, a huge number of children in Assam are now exposed to various risks--health, child labour and trafficking. About 6.65 lakh children are estimated to have been affected by the current flood situation in Assam. 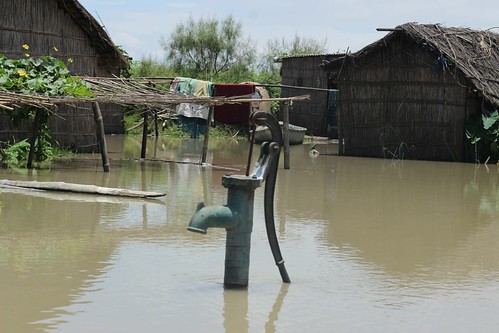 Water is receding, problems are not. Certainly not for children. During floods, drinking water becomes inaccessible as many water sources like tubewells and wells get submerged in water. Also, with water all around, good sanitation, too, is affected. In the post-flood situation, contamination of water sources poses serious threat to health, especially that of children. They are also at risk of contracting water-borne diseases like typhoid, diarrhoea and cholera and vector-borne diseases such as malaria and dengue. The state health department has deployed medical teams in the flood-hit areas along with a regular supply of medicines to cater to the needs of the people in these areas.

During floods, hundreds of schools, which are not under water or have not been washed away, function as relief camps. With home, hearth and livelihoods taken away, children are at a high risk of dropping out of school. “As schools and homes are under water, children’s reading and writing materials are damaged or washed away--a reason enough to drop out of school,” says Dr Chiranjeeb Kakoty of Guwahati-based North East Society for the Promotion of Youth and Masses (NESPYM). It takes time to resume classes in schools after the flood because the schools that are damaged need to be repaired and the schools that are functioning as makeshift camps need to be emptied. Moreover, the damage to the infrastructure like roads and bridges pose difficulties or risk in commuting between home and school, making it impossible for many children to attend school, particularly in areas around big rivers, says Dr Kakoty. “For girls, especially adolescent girls, inaccessibility to sanitation facilities in a post-flood situation, is another reason to drop out of school,” says Megha Kashyap from Universal Team for Social Action and Help (UTSAH), Guwahati.

In many areas, the schools close to the river banks get eroded and the teachers and pupils will have to make do with makeshift sheds till permanent structures are built. Many others keep shifting to safer places as rivers change landscape constantly. According to a report published in the local newspaper, The Assam Tribune, the Brahmaputra and Beki rivers have eroded 13 schools in Mandia education block of Barpeta district in the floods this year. Around 21 schools were eroded in the same area in 2014.

From frying pan to fire

When homes are shattered and agriculture affected, parents are often compelled to send their children for work for additional income. It has also been noticed on earlier occasions that going to school is no longer the prerogative for a child whose home is destroyed by the flood, explains Dr Kakoty. “Many children and youth migrate to other states like Bangalore, Goa, Kerala to work in restaurants, medicine companies, as security guards etc,” says Baijayanti Kalita of Society for Social Transformation and Environmental Protection (sSTEP), Guwahati.

When the water recedes, people go back from the relief camps to repair or rebuild their homes, and to look for livelihood opportunities. This is the riskiest time. “During this time, a lot of people try to lure these people to send their children to other places promising lucrative opportunities which often turns out to be a ploy for human trafficking,” says Kalita. Some of these children end up working on roadside hotels, restaurants, railway station, etc. “Assam, especially Guwahati is the source, transit and destination for a lot of trafficking, putting vulnerable children at risk. Not just trafficking, they are also at risk for substance abuse, alcoholism, violence, etc,” says Kashyap. A recent report by Assam's Crime Investigation Department states that at least 4,754 children have gone missing in the last three years in Assam--many being trafficked from the relief camps itself.

Floods are scary. But what is scarier is to be sitting in the middle of Brahmaputra in chars (small sand bars emerging from the river) when the river is in full spate. Highly susceptible to erosion, the char areas dot Brahmaputra’s course spreading across 14 districts of Assam. About 25 lakh people live in 2,251 villages on these chars. The chars cover 3,608 sq km of the Brahmaputra basin--approximately 4.6 percent of Assam’s geographical area.

In an event of flood, char areas are more disadvantaged. “Repairing infrastructure in other areas catch the government’s attention easily, but char areas are difficult; there is hardly any infrastructure here. Teachers who come to chars from other areas are not able to attend schools for a long period of time as they remain cut off from all communication,” says Abdul Kalam Azad, an activist of Jhai Foundation, working in char areas of Barpeta district in Assam. 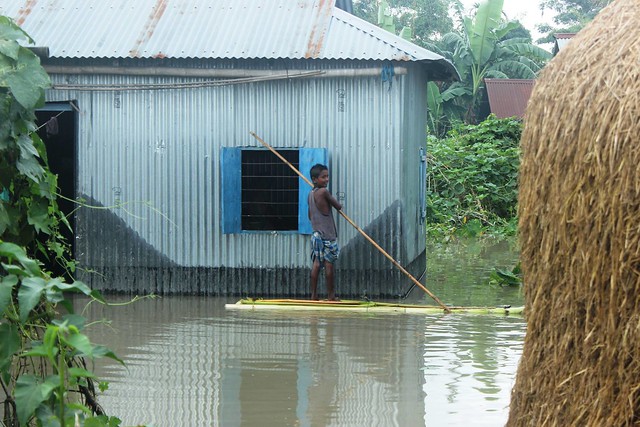 In char areas, the risk of floods starts as early as May and continues till September. “As such, normal functioning of schools is out of question. Many times exams are not held. In many such areas, teachers repair the schools destroyed in the floods with help from students,” he says.

What can be done?

For a state like Assam that has rarely seen a year without floods, to be not prepared for a disaster is rather reprehensible. “There needs to have proper planning so that people are not affected in such disastrous manner and the impact is minimised,” Dr Kakoty says.

“What is achieved by sending relief forces once an embankment breaches? There has to be a proactive team to plan to prepare for such events before they strike. Why have we built schools just 100 metres from riverbanks despite knowing for years that these are flood and erosion-prone areas? This is just firefighting and we can keep on doing this forever. But if we have to live with the floods, we have to learn how to do it,” says Dr Kakoty.

For the health crisis a flood situation often results in, Dr Kakoty suggests mobile health as an intervention. These need not necessarily have doctors. "Good paramedics who can give primary treatment and who can connect with the doctors in the districts for further help will be good enough," he adds.

Floods cannot be prevented but a better flood-resilient plan and training for the people to handle such situations better can go a long way in reducing its impact on them. “In many char areas of Bangladesh, there are schools running on boats, we can learn from these,” comments Azad.

Last, but not the least, we need to have a system in place to forecast flood and to improve the communication between upstream and downstream areas in the flood-affected regions to avoid catastrophic situations, he adds.