Seetha Gopalakrishnan
16 Sep, 2013 . 3 mins read
The swampy area of Pallikaranai, 20 km away from Chennai, has reduced from 5000 to 500 hectares in about 40 years. Despite it being made a partial Reserve Forest, it is under threat of dying out.

Kazhiveli' of Pallikaranai near Chennai

The term wetland is a bit difficult to understand. Is it land or water or land that is wet? It is likely this difficulty in comprehending the term that has led to the sad state of affairs for most wetlands in the country today. Wikipedia defines wetland as 'a land area that is saturated with water, either permanently or seasonally, such that it takes on the characteristics of a distinct ecosystem.' Marshes, bogs and swamps are all different types of wetlands which have, over the years, nurtured plant and animal species which are unique; these species have adapted to the conditions around them.

Pallikaranai, about 20 km away from Chennai, is one such ecosystem. Home to over a hundred species of birds and a host of reptiles and amphibians, the marsh had developed its own character with regards to species diversity and its relation to the surroundings.

But 20 km isn't nearly enough to escape the city’s hurried invasion. Now, the wetland is fragmented with many radial roads cutting through its core. A major portion also houses the city’s waste.

Chennai, unlike Mumbai or Kolkata, does not have natural protrusions along its coast to protect it from the high seas. Its entire coastline directly takes the brunt of the constant waves. Marshes and swamps play a pivotal role in mellowing down the effects of sea erosion while also helping in flood control along the coastlines. Marshy soil soaks up the water like a sponge and retains moisture for longer periods of time. Slowly, it releases this water slowly through its outlets to surrounding areas. These important natural formations also act as bio-shields against tsunamis.

The past few decades have witnessed massive changes in the cityscape of Chennai with glass and concrete structures in the form of Special Economic Zones (SEZs) and highways dominating the southern suburbs. Many software as well as manufacturing industries have prefered to set up shop to the south of the city. With the IT and automobile boom, the need to develop appropriate infrastructure could not be ignored. The wetland once spread across over 5000 hectares, but just three to four decades of development has reduced it to a meagre 500 odd hectares.

As part of the Madras Day celebrations across the city in August, the Press Institute of India had organized a presentation on the Pallikaranai wetland. Perspective photographer Shaju John’s stunning pictures were used by noted environmental activist Nithyanand Jayaram during the lecture. He lamented that Pallikaranai was the perfect manifestation of a lie in the name of development. 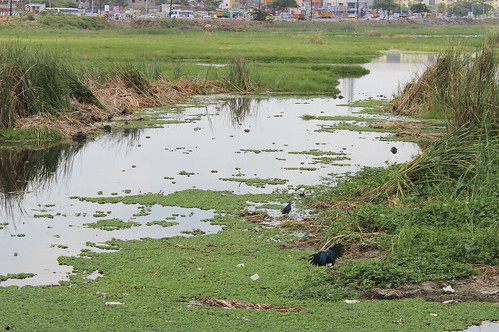 He blamed unregulated construction – both industrial and residential – for suffocating the city's waterways and wetlands. While the land is constantly being encroached upon, lakes and rivers continue to be transformed into large sewers.

The construction of the Velacherry MRTS station along with the increased usage of the Old Mahabalipuram Road and the construction of the Tambaram-Thoraipakkam Road, has also played an important role in changing the topography of the place. Blockages in the water flow to the North and West of the lake have resulted in unavoidable flooding of residential complexes in those areas.

Photographer Shaju John has witnessed this transformation for over a decade now. He has photographed both the beauty that is Pallikaranai as well as the beast lurking in the background. John's anguish at the swift pace in which the waterscape is being transformed into a mound of refuse was not hard to miss.

Like-minded people have gotten together in the past to do their bit for the ecosystem that is dying right in front of their eyes. Support for campaigns and forums to save the wetland has gone up over the years due to increased awareness. In 2007, the Government had allocated portions of the wetland as a Reserve Forest hoping to prevent the entire area from being converted into a mega dump. More such efforts, from both the residents as well as local administration, are needed to preserve this marsh and the life around it.