This scientist turned farmer does it all!

Dr. John's Khazan next to the Zuari river

Khazans are a unique man-made ecosystem that give Goa its traditional form of farming. Khazan lands are reclaimed lands from the river or sea. The technology is adapted to protecting agricultural fields and adjoining villages by managing the water coming from estuaries of the river through a network of bunds.

Dr. John Fernandez, an ex-scientist with the National Institute of Oceanography (NIO) purchased his 3.6 hectare Khazan Land in 2000. Not that he had any background in farming, but out of sheer interest he wanted to grow crops and be part of the farming community. His Khazan Land is part of the Zuari River channels. When he started out, he had no access to electricity or water. He made friends with the owners of the adjoining plot and they began sharing electricity and water.

In his land, John has started a few experments that has yielded him with bumper harvests and more importantly, knowledge. SInce he was with NIO, he had heard about institutes like TERI (The Energy Research Institute), ICAR (Indian Council of Agricultural Research) and Local Farmer Clubs. These were places where he picked up the scientific approach to getting better yields. In addition to this, he also went about visiting the village elders and would inquisitively ask about traditional methods of farming and the logic behind several practices. 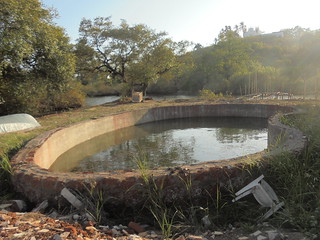 John realised that he didn't have enough water to practice agriculture on his land, even though Goa recieves an annual rainfall of 100 inches. So he decided to build a water harvesting structure, which has given him enough water even during the summers. The rain water harvesting pond, is 15 m in length, 9 m in breadth and 2m in depth. Before construction, he lined the bed with concrete and cement since the soil, which was close to the estuary, wasn't holding water otherwise.

In Goa, the solar salt technique is used to make salt. Simply put, the method is such that the sea water, from where salt is extracted, is dried using heat from the sun. Preparing the salt pan for production of salt involves attention to detail. 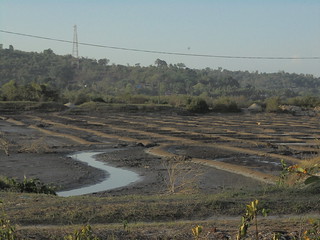 First, the salt bed is made by levelling evenly across so that dirt and waste is removed to ensure good quality of salt. After this, it is filled with water again and dried out. Then, smaller plots (as shown in the photo) are made to form a network for water to pass through. After this, the water is controlled and left to dry.

John produces about 3 tonnes of salt every season. He incurs an average cost of Rs. 90,000 for the labor as production costs. This is for 2 hours of work in the morning and 2 hours in the afternoon. In addition to all this, he has planted a few coconut trees along his land but he is careful about where they are placed. He says, "I have to be careful that they are at a good distance from the salt pans. This is to ensure that from every possible way, there is enough solar energy".

When salt is not prepared in the land, the water is retained and shrimp and prawn are reared in it. Since the land has a salty flavor, it is excellent for growing shrimp as they require high levels of salinity. The seeds are brought from the State Agricultural Department. John ensures that the seeds are of good quality and also that the water is regulated with the help of the sluice gate. 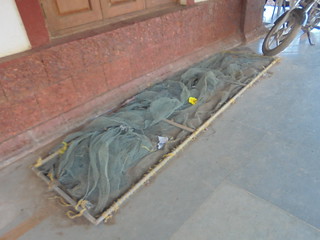 "We have to understand that we cannot mess with the natural system. In fact, the environment in the estuaries and river is the best because it is running its own natural course. But at the same time, we are also harvesting. So I use a special kind of net when I am opening or closing my sluice gate for controlling the water inside the bund". This net ensures that all the fish that are on their way out are held within.

When the water levels are low, he throws in a net to harvest the shrimp. Since they are bottom-feeders (meaning that they stay at the bottom of the pond to catch their food), chances of them leaving the bund is very less. He harvests fish along with the spring tide. Spring tide is a term used for the 15 days of the waxing and waning of the moon. So he harvests only on the first three days of the spring tide. He allows the fish to regenerate and cultivate after. If the fish have not grown to their size, he does not harvest that day. He waits until the next spring tide to harvest. 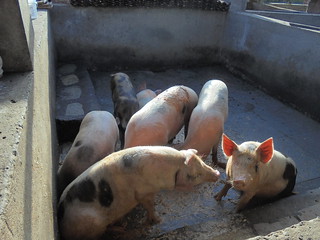 Because tourism has increased in Goa, the demand for pig meat has risen. Hence, John decided to take the plunge and started rearing pigs. Pigs are easy to rear and need minimal labor. They need timely feeding and washing, which are done by the laborers on his field. He forsees this as a huge profit-making activity. He has a separate soak pit for the pigs so that their feces do not contaminate his salt bunds or the river water.

Way ahead
Understanding Khazan cultivation and successfully harvesting year after year has been a meaningful journey for him. He has a few plans some of which he has already started on.