Can we keep blaming dengue on climate change?

Aarti Kelkar - Khambete
25 Aug, 2013 . 7 mins read
Poor sanitation, poor waste management systems and poor urban planning are the real causes of dengue. Find out what we can do to prevent this disease.

Mosquito bites - the cause for dengue fever

Shantamma woke up one morning with a high fever. She also had a sudden pain at the back of her eyes and severe joint pain. She had been finding it very difficult to move around and go on with her daily routine. And it was quite a tedious routine, which began at 5 a.m. She was a house maid and worked at multiple houses every day. The pain reached an unbearable level prompting her to visit the government hospital, which was full of patients by the time she got there. To her surprise, there were many others with the same symptoms. When she finally met the doctor, he diagnosed her as having dengue.

He told her that mosquito bites were the likely cause of her dengue. When she heard that, she thought about the number of mosquitoes she was constantly exposed to. Her house, which always contained stored water in vessels, was a likely breeding ground. The thick vegetation around the place, which was filled with puddles due to the rains was also full of mosquitoes. The path from her house to the river was filled with garbage - another mosquito trap. She was surprised to know that mosquitoes could cause so much harm, especially when the doctor told her that there had been a nationwide epidemic of dengue with Thiruvananthapuram in Kerala having the highest reported cases.

The dengue epidemic in India

The monsoons this year have been in the news for many reasons, but flooding and the dengue epidemic in India have been the main ones. India accounts for almost a third of the world’s cases of dengue and this number has been rising rapidly [1]. The number of dengue cases have gone up by 80% as of July 2013 compared to the same time last year [reliefweb]. Kerala has reported the highest number of cases followed by Karnataka, Tamil Nadu and Maharashtra as of July 2013 [reliefweb].

Within Kerala, Thiruvananthapuram district and the capital city of Thiruvanathapuram have reported the highest number of cases. Private hospitals in the city have been overflowing with people reporting fever [NDTV, Indo -Asian News Service, The Hindu].

Although the broad reason for the increase in dengue has been attributed to climate change, developing countries such as India have are more vulnerable because of poor urban planning [2]. Poor storage facilities for water, lack of proper garbage disposal mechanisms, lack of proper sanitation and open gutters and drains have led to unhygienic surroundings that provide an ideal breeding grounds for mosquitoes [2]. 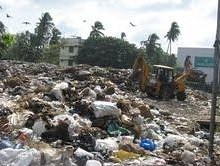 Accumulation of garbage in Indian cities has increased massively due to rapid urbanisation. More people are migrating from villages to cities but the cities, in turn, aren't being planned to accommodate this rise in population. A number of cities including Bangalore, Kolkata, Mumbai, Srinagar and Kanpur are affected by this problem [The Times of India] and have reported a rise in the incidence of diseases such as malaria, rabies, dengue and other unidentified types of fever [The Hindu].

The high number of dengue cases in Thiruvananthapuram have been attributed to the increasing garbage crisis in the city. Plastic waste coupled with water-logging and inefficient drainage systems have led to an increase in mosquitoes in the city [NDTV, Indo -Asian News Service, The Hindu].

Open defecation, when coupled with poor drainage systems, leads to flooding and mixing of sewage with accumulated water during the monsoons. This polluted stagnant and completely filthy water is a perfect breeding ground for mosquitoes.

How can we prevent dengue?

Since dengue spreads through mosquito bites, making sure that people aren't exposed to mosquitoes is key. The following steps can be taken to minimise exposure to mosquitoes:

While these steps can be taken individually, dealing with the problem on a larger scale isn't that simple. Efforts need to be directed at two levels - the level of governance and the community level.

Dr Saraswathi, Former Director, Indian Council of Social Science Research (ICSSR), New Delhi argues, “The traditional attitude of ‘out of sight, out of mind’ exhibited in throwing domestic garbage on public streets to be collected, sorted, and disposed off by municipal authorities is no longer workable. Sorting garbage at the source in every house, restaurant, shop, office, etc is unavoidable if we are not to get crushed under the weight of garbage mountains in the cities and fall a prey to diseases” [7].

Recognizing these as issues, many initiatives have been started in different cities. In Pune, waste pickers have formed cooperatives that have established systems for recycling waste. In Thiruvanathapuram, efforts are being made to penalise institutions that dump waste openly and subsidies are being provided for decentralised waste management. Bangalore has begun separating its waste at source while door to door waste collection is being done in Kolkata. Many cities have taken steps to ban certain kinds of plastics [7].

However, for these efforts to succeed, close cooperation between all the sectors involved is necessary. Better governance systems from the corporation or municipality board are necessary. These systems must address problems of understaffing and lack of adequately trained staff as well as the introduction of better methods and technologies for waste management at local levels. Waste management systems could also involve the local and informal waste collection networks to strengthen the existing systems.

Sanitation issues can't only focus on toilet building, but must also take into account other aspects such as availability of water and user perspectives and convenience for people who use the toilets. Besides it must also address problems related to proper maintenance of toilets. Evidence indicates that many a time, it is the lack of proper governance and management that leads to poor maintenance of public toilets in cities that forces people to defecate out in the open [Indiatogether].

The same is true of the public health systems that deal with epidemics. It needs to develop better strategies that aim at prevention, spreading awareness, early detection and better clinical management to prevent deaths in the future [2].

Epidemics such as dengue are not inevitable due to climate change, nor are there any magic bullets to provide quick-fix solutions to the problem. Other things are necessary to deal with the epidemic in the long run such as:

Shantamma is now well-informed of dengue and what she has to do to ensure that there are no mosquito breeding sites in her area. Most importantly, she knows enough to tell others in her community. “It is not so difficult to fight the epidemic. That will prevent so much of the economic burden that one has to face besides the physical suffering that one has to go through, if we have the correct information and come together and decide to do something about it! What is important is the will, determination and commitment to do so”, she says with a smile!

3. Government of India (2013) National Vector Borne Disease Control Programme, Ministry of Health and Family Welfare. Downloaded from the site: http://nvbdcp.gov.in/den-cd.html on the 8th of August 2013.

5. Health (2013) Dengue. Dengue fever: Symptoms, medication and prevention. Downloaded from the site: http://health.india.com/diseases-conditions/dengue-fever-symptoms-medication-and-prevention/ on the 12th of August 2013.

6. Health (2013) Prevent dengue with these 10 practical tips.Downloaded from the site:  http://health.india.com/diseases-conditions/prevent-dengue-with-these-10-practical-tips/  on the 12th of August 2013.

7. S Saraswathi (2013) Waste management: Can't dump the issue. Downloaded from the site: http://www.sarkaritel.com/waste-management-cant-dump-the-issue/ on the 12th of August 2013.