The nonexistent bridge in Punjab

Manu Moudgil
10 Aug, 2015 . 5 mins read
At Punjab's Mand island, not many children go to school and pregnant women deliver at the river bank -- all because there is no bridge connecting it to the mainland.

The only connection of the island with mainland is through a pontoon bridge which the Public Works Department removes as the water level rises during monsoon.

Bakshish Singh once had 13 acres of farmland; now he only has one. He lost the rest in 2013 when the Beas river changed its course and started flowing near his house. Bakshish lives at Rampur Gaura village in Kapurthala district of Punjab, the state generally known for good roads, urbanised villages and wealthy farmers. Amidst this prosperity however, are islands of desperation and loss. Mand is one such island which lies between two streams of the Beas.

In Punjabi, ‘Mand’ means ‘submerged land’ thus signifying the ebbs and flows of the Beas which goes on to merge into the Satluj river at Harike Barrage. Though the whole riverine region is called Mand, the core area is an island of around 16 square km with over 3,000 people residing in dispersed settlements.

The only connection the island has with mainland is through a pontoon bridge which the Public Works Department removes as the water level rises during monsoon. Then for three months, people can only traverse using boats which don’t ply during the rain and thunderstorms lest the river take them along. Bakshish's younger brother died of rabies after they failed to vaccinate him on time -- he died on the boat while they were trying to cross the flooded river.

Mand was always difficult to access. Wild animals including boars and blue bulls inhabited the marshy lands covered by tall elephant grass. As far back as people can recall, there were very few hamlets inhabited mainly by Muslims who used to cultivate some of the land for family needs. In 1947, they went over to the newly-formed Pakistan while many of the Sikh peasants who came over from west Punjab were allotted the same land for farming. Most of them, however, lived in nearby villages on the mainland.

Things changed in the 1970-80s when Mand gained infamy during the period of militancy. Since Punjab had very little forested area, Mand turned out to be the only place which provided a natural cover to militants. Even aerial operations in this region failed miserably.

It was during this time that security forces persuaded farmers to expand their land holdings by clearing the tall grass and reclaiming the marshes. Availability of the latest farm equipment which could remove obstacles and level the undulating land furthered the effort meant to reduce the hold of militants. “Locals were caught between militants and security forces. Many farmers also paid a heavy price for this,” says Nirpal Singh, president of a labour union in the area.

The reclamation and expansion gave way to proliferation never seen before. As families expanded, people started moving out of their villages to set up habitations amidst the fields forming newer and bigger villages. Today, more than 3,000 acres of the island are cultivated. A few farmers still live in mainland villages and come over to tend to their farms in the day. The landholdings are large but as with any land along the riverine system, they are always transitory. 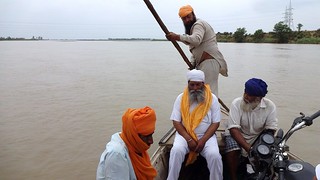 Lakhwinder Singh is now left with 5 acres from his 19 acre farmland and a house. The family had a debt of Rs 7 lakh and when its possessions got submerged two years ago, his father lost all hope and committed suicide. The family now stays at a relative’s home in Mundapind of Tarn Taran.

Talking over the phone, Lakhwinder says that they have stopped waiting for relief from the local administration which is only promised but never delivered. “There are more important things to be done. The farmland which has re-emerged from water is full of sand. We have to remove that and sow fresh seeds. Till then, we are taking up labour work on other lands to survive".

Just like Lakhwinder, farmers of Mand have a list of promises politicians and administrators haven’t kept. None of the villages have a metalled road. The only bricked road is the one near the sole high school at Baupur Jadid village. There are no hospitals or dispensaries.

“People can still cross over in boats and visit doctors at Sultanpur Lodhi but it’s difficult to take sick cattle. No wonder, people don't want to get their daughters married here,” points out Paramjit Singh, the president of Kisan Sangharsh Samiti, a group of the area’s farmers. There have also been instances of pregnant ladies delivering on the river bank as they could not cross over to reach the hospital on time.

Many children drop out from school and only around 100 students take the risk of going to schools in Sultanpur Lodhi. A permanent bridge seemed a reality in 2011 when Punjab Chief Minister Parkash Singh Badal laid two foundation stones, one on the mainland and another at Mand Karmuwal village.

However, the bridge did not fructify. “The funds were to come from the Centre but with a change in the government, priorities changed and nobody talks of the unfinished project now", says local MLA Navtej Singh Cheema who has raised issues related to basic amenities on the island in the state assembly. “The local administration says approach roads can’t be built as the area gets flooded and the life of roads will be less. How can you avoid such essential services to people who have legal landholdings?", he asks.

There is lot of essential work that government officers and politicians can do. Starting with a permanent bridge would be a great option.