The benevolence of a flood

Narayanjee Choudhury
Chicu Lokgariwar
18 Sep, 2014 . 3 mins read
Floods are generally considered damaging but this story is one where the farmers of Bihar willingly invited a flood to bless their fields!

People of Laksena watch over their temporary dam

Bihar is no stranger to floods. The high-volume, high-velocity floods caused by large infrastructure projects regularly disrupt lives and decimate entire villages. This is the oft-repeated narrative, one of a helpless population as victims.

A little less well known is the other story- the one where Biharis manage their landscape and their rivers to provide them with a successful harvest. One such instance is that of the artificial flood created in the Sugerbe river by the people of Laksena village in Madhubani to protect their harvest from the effects of drought. 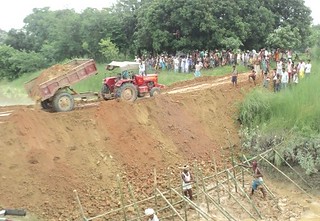 A dam is willingly built!

As the sun set on the August 4 2012, the area resounded with the rhythmic beating of drums. The villagers of  Laksena, Novtoli, Godamtol, Mahindwar, Madna and Madanpatti were informed that they should be present at a place called Gaughat the next morning to construct a bundh, which is a temporary mud dam, across the free-flowing Sugarbe river. This would restrict the flow of the river for only a few days while the land received much-needed water; after the dam was dismantled, the river would once more flow free.

More than 500 farmers responded and worked for 14 hours to construct a mud dam 30 feet long and 19 feet high. The front of this dam was protected by a bamboo wall. As they watched, the water began rising behind the dam and slowly rippled across the flat floodplains that make up the district of Madhubani. The farmers' work was not over, though.

10-15 farmers at a time kept a 24-hour watch over the dam for the next 5 days. This was to guard against any possible breach of the dam. To enable quick repairs, a load of dry mud was kept at the ready next to the dam. 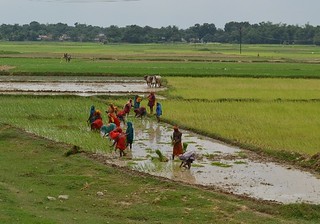 square kilometers of land (nearly 10,000 acres) belonging to 33 villages had received much-needed irrigation. The farmers donated their time and expertise, along with tools and materials such as bamboo. They refuse to even consider this in the calculations, so the only expense to construct this dam is that spent on hiring 2 earth movers and 5 tractors. That cost Rs.85,000, or less than Rs. 9 per acre.

After the 5 days of  flooding, the dam was dismantled and another one built 3 kilometers upstream of the first one to flood yet another expanse of land. This ensured that the downstream users, usually the ones at the 'tail end' had first access to the water.

That year due to the irrigation received in this manner, the farmers of these 33 villages had a yield of 10 quintals of paddy per acre, which at the then-prevalent rate of Rs.10,000 per acre implied a total income of  Rs.10 crore.

Had the dam not been built...

Several farmers in the Gangetic floodplains depend on groundwater for irrigation. This is pumped out from borewells using diesel pumps but this technology comes at a cost. Very few farmers, especially the subsistence farmers of Bihar, can afford a borewell and diesel pump. Even those fortunate ones who are able to make the investment, soon realise that running costs at about Rs. 1200 an acre are prohibitively high. Finally, there is the environmental cost. Both diesel and groundwater are finite and already-stressed resources.

This wise, resource-efficient, energy-efficient method of irrigation is now on the decline. Part of the reason is the government's narrow definition of 'drought relief'. At present the relief package for drought-affected farmers include diesel subsidy, subsidy on purchasing of irrigation pumps, and a subsidy on fertilizers. Instead, popularization, funding, and facilitating the adoption of this technique in times of flood will not only prove to be a better investment of disaster relief funds, but also an investment in the social capital of the villages.