Waging the war within

Chicu Lokgariwar
06 Mar, 2017 . 6 mins read
Sexism is as glaring in development sector as it is in any other professional field. Feminist activist Nandini Rao says both causes cannot be mutually exclusive for the development to be holistic.

“That was a very scary place to be in,” says Nandini frowning at the memory of dealing with a rape allegation against a colleague. The allegation had severely fractured the community of activists that she worked with. “These were people who we knew really well, we were comrades on so many issues. But when the rape case broke, we were suddenly on two sides of the fence and could not sit down and have the same conversation,” she says. The confusion in Nandini’s voice is palpable as we chat sitting on a sunny wall. Nandini Rao is an independent feminist activist and gender trainer who has been campaigning on issues around women’s rights, gender, and sexuality for many years.

Nandini agrees. In her experience, patriarchy becomes apparent at several key moments, especially during incidents of sexual harassment at workplace. In her immediate circle, there were two such cases filed by women against male colleagues in the last three years; one was an accusation of harassment at workplace, and the other, rape, where the perpetrator was convicted. Both instances proved to be divisive. Nandini remembers, “We began to hear statements like ‘you feminists are always demonising men and breaking the feminist cause’ from within the circle. That was a very scary place to be in. We were comrades on so many issues. When the rape case broke, even after conviction, all the blame was assigned to women. Both men and women were responsible for this victim blaming. It is not as if we agree on every single issue, but there is always space for dialogue. But in cases of sexual assault, it becomes ‘how can you think this of him?’ which is, in fact, the mentality that we have been fighting to change!”

Another instance of blatant sexism is when male team members decide what their women colleagues can do. This, says Nandini, is often passed off as being protective. “Suppose you are going out for a fact-finding mission somewhere. Men and women sit down together and plan the mission. Once at the venue, the woman team member may get told, ‘it is better if you do not come because it is not safe for you there’. This is sexist and unnecessary because who gets to decide if a woman should or should not do a certain thing. These are comrades who have been working together on so many different issues. But men can still say to you, ‘you don’t go’.”

And finally, there is the everyday, garden variety of sexism in the development workplace. During a meeting or a field trip, it is the women who are delegated what Nandini refers to as “nurturing roles” like making and serving chai, for example. She also points out that it is not just gender that determines the roles. There are class and age as well. “You get to do a certain job based on all these which complicate matters. This happens even in activist circles,” she says.

This caste and class bias within the gender framework is also discernible in the authority women can assert within a workplace. Nandini says, “You sit around with your team, but you often don't give your women colleagues space to speak. At the same time, it is not that no woman gets to speak but it depends on her class, caste, or background. I have seen this a lot; women colleagues from a certain class or caste just have no say in matters. You have to carry your damn background wherever you go. For each person, whether man or woman, making that effort to have everyone share their thoughts and also convey that your thoughts are as important as mine, is a big uphill task.’ 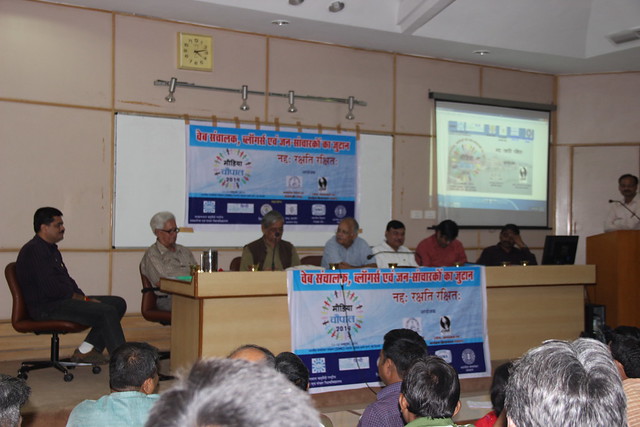 Have there been any changes in the two decades that she has been actively working on gender equality? “Participation of women has increased, especially political participation,” says Nandini. “But decision making is mixed. I won’t say that there has necessarily always been more decision making on the part of women. I feel that I have been super lucky because, in the past 20 years or more that I have been working, I have been in the feminist circles for 14-15 years. That’s been fun because, in feminist circles where you also have male comrades, there is a sense of women taking ownership of all the issues. I like being there, in that space. But in other groups, in other democratic circles, in NGOs, I don’t think women are in the forefront as yet. There are more women, but are they able to negotiate? Within those circles, it is sometimes more difficult.”

At the same time, more young women with a lot of gumption are entering the development sector. Speaking of how younger women resist the gender-specific tasks that may get thrust upon them, she says, “They possess the credentials to occupy space as valued comrades. No one can take that away from them. When I say these women have dum (gumption), I mean they will resist if they (and only they and no one else) are relegated to the position of making and serving refreshments.”

Nandini admits that feminists themselves are struggling with effectively articulating gender issues. “Earlier we used to talk about Mahila himsa or violence against women. Now we talk of gender-based violence, which is violence against people on the basis of gender. That too is important but I worry that it has diluted the women’s cause,” she says. And if feminists themselves are struggling, people working in the environmental sector are clueless. There is a definite tendency to compartmentalise issues. Nandini says, “I hear very often someone saying, ‘I understand perfectly well that water as an issue concerns women. But first let us tackle the main issue of water, and then we will talk about women’. This is also true of other marginalisations; gender, trans and queer issues are seen as secondary issues. It is patronising to say that. Here, you are not integrating two important issues which are a shortcoming of the work in hand.”

“The ability to understand and bring in the specifics of gender and sexuality issues into larger frameworks like environment, natural resources, etc should be a natural part of what we are doing. But as a society, we are so divided on so many issues and also have a lack of understanding of the issues, we would rather work in isolation. Everything will not knit together magically at the end. Bringing everything into a large framework is a huge task,” Nandini sums up.