A month ago, India Water Portal tried to make sense of the numbers involved in India's flagship programme. Two-thirds of the works in progress in the current financial year (2012-13) were devoted to works linked with water - split nearly equally between water for domestic use and water for livelihoods.

IWMI and IRMA have been working to determine the impact of MGNREGA on rural water security. They presented the results of their studies during a dedicated session at the IWMI-TATA annual partner's meet at Anand in November 2012.

Nitin Bassi presented an overview of the status of NREGA in the country, and then led  a discussion of how it impacts employment and access to water.He addressed the question of why employment generation does not match the potential of MGNREGA. and presented pertinent statistical information about MGNREGA. His study classifies the various water interventions into three typologies and suggests management mechanisms for each.

The discussions during this session have been grouped into three categories below.

Quality of structures created through MGNREGA
Shilp Verma presents main results of a  study of 143 assets created by MGNREGA and perceived to be the best-performing assets by the administration and also by the users. This study analysed the direct economic benefits of these 'showcase' assets one year after creation. This talk ends with offering 8 guidelines for maximising the economic returns of investment in creating assets through MGNREGA including setting easily-acheivable goals, keeping MGNREGA demand driven and fixing responsibility for the maintenance of created assets.

Apoorva Oza added to the importance of quality and meaningful work by pointing out that of the three deliverables of employment- income, production and recognition - MGNREGA tends to focus only on income. Recognizing that people look for work satisfaction rather than meaningless employment will not only increase demand, but will also increase the value of the assets created by MGNREGA. 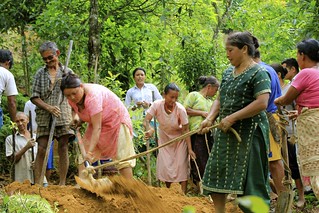 MGNREGA's potential to create assets that add to water security
CFID described how MGNREGA has the potential to rehabilitate irrigation systems including ensuring transparency, institutional set up, etc. A financial break up is also provided. The presentation makes a strong argument for replicating this process in other states as well.

RPS Mallik's study of two districts in Madhya Pradesh concluded that the quality of structures was acceptable, but farmers' access to the water made available is dependent on their access to pumping equipment.

Barbara von Koppen pointed out that truncated silos for water use do not hold true in actuality where all water is subject to multiple use. Planning for this multiple use needs to begin from the grassroots level. Global experiences with this planning for multiple use are described in this talk.This will also increase accountability in public spending and water allocation.

The impact on labour markets
Nisha Nair examined the impact of MGNREGA in the context of the pre-MGNREGA labour scarcity in Kerala. She presents statistics about the employment generated through MGNREGA, including the fact that the share of women in MGNREGA is now at 93%. The study presented covered 13 villages in Palghat, where the program was demand-driven. The reasons for its attracting labour more than farms were found to be higher wages, better facilities, the perception of it's being lighter work, and availability of work close to home.

Some other reasons were awareness of MGNREGA and its benefits, the need to open a bank account with the resultant financial independence, the perception that it is a 'government job' and schemes for MGNREGA workers initiated by the state government. However, this caused a shortage in the availability of farm labour. The coping strategies adopted by farmers is explained, including mechanization. Farmers' perceptions of the impact of MGNREGA on labour are also listed including their contention of it's making labourers 'lazy'.

At the same time, the prevailing farm labour rate also determines if the labour market is added to as in the case of Kerala or whether there is a shift within the existing labour base. Migration continued as MGNREGA labour does not match urban earning potential, though it may be argued that this is opportunity migration rather than distress migration. Verma classifies the impact of labour into four 'interactions' depending on the prevailing labour situation and provides an analysis of each.

One important and positive impact that is evident from both Nisha Nair's and Shilp Verma's presentations is that the set MGNREGA working conditions - such as creche facilities and set times - have led to labourers desiring the same facilities in other jobs. Another positive impact is the financial independence that the compulsory bank account provided the women workers.

To learn more about MGNREGA, read the MGNREGA Sameeksha 2012.
To learn of how MGNREGA will evolve in the future, read the guidelines of the Mihir Shah Committee.

Read the highlights of the IWMI TATA annual partner's meet.