Dilip from Ballia, Uttar Pradesh, has finally rid himself of the itchy, black spots on his skin that bothered him for many years. How did he do it? He cleaned a dug well in his village! Seems a little disconnected, doesn't it? Dilip also failed to see this connection and did not realize that the water he drank was silently causing his own body to turn against him. Not so much the water itself, but what it contained - an almost tasteless and odorless contaminant called arsenic.

Arsenic in its pure form is a harmless element naturally present in the earth’s surface but when it combines with elements such as oxygen, it turns highly toxic. Most arsenic enters water supplies either from natural deposits in the earth (known as geogenic contamination) or from industrial and agricultural pollution.

A single dose of 1.5 milligrams (mg) per kilogram (kg) of body weight can be fatal to human beings. Such a large dose doesn't come from a one-off instance of drinking water from a polluted source but consuming arsenic-contaminated water for a prolonged period of time, can and does cause it to accumulate and poison the body.

Does that imply that the people of Ballia were always being poisoned by arsenic? The answer is no.

When did Ballia's problems start?

This story began in 1990, when the government constructed a large number of hand pumps throughout Bihar and UP to provide clean, easy-to-access water to the villagers. The ease of using hand pumps won over the villagers and they began neglecting the existing open wells. Little did they realize that they would pay a large price for this convenience.

Itchy skin lesions, changes in skin colour, hardening and thickening of skin into nodules became common afflictions of the villagers. Gastrointestinal disturbances, chronic cough and shortness of breath added to their discomfort as well. When this continued for years and affected a majority of residents, the government swung into action in September 2011.

Suspecting arsenic poisoning, a fairly unknown subject then, it tested and analysed the village's water sources. The report showed that 31 districts of UP had arsenic levels that were above the safety limit of 10 parts per billion (ppb) set by World Health Organisation (WHO). In some areas, the value was nearly 130 times the prescribed safety limit [1].

In addition to exploring options on how to remedy this situation, they wanted to understand how this contamination happened to get to the root of the problem. No gold mines had been discovered in the area that could have leached this poison into the groundwater since arsenic is a toxic by-product of gold mines. In a typical groundwater table, the very shallow and very deep aquifers tend to contain lesser arsenic. The middle layer tends to be the most contaminated.

When the switch over to hand pumps was made, the aquifers were tapped at a depth of 40-60 m leaching out iron and arsenic [2]. That is what aggravated the problem and led the arsenic to reach the levels that it did.

In Ballia district alone, 38% of the hand pumps tested had a higher arsenic content than the mandatory standards as per WHO recommendations [1]. The dilemma for Dilip, as for the others in this area, was to find an alternate, sustainable and safe water source. 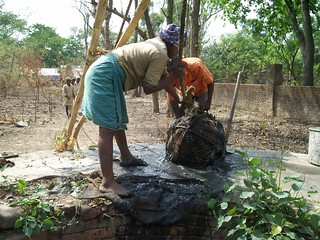 Remedying the situation in Ballia

One answer was to dig deep tubewells or deep hand pumps that delved into the deeper uncontaminated aquifers, which could be a source of arsenic-free water but the huge costs and the long term safety of these sources was debatable. Over consumption or improper installation would lead to their eventual pollution.

The government piped water schemes too could provide safe water, but such large projects need a lot of time and money to be invested. Also, the water treatment in such plants need power, which was another bottleneck in this energy-deficient state. Already the community filters in many arsenic-affected areas lay defunct and useless. Arsenic removal plants & overhead tanks installed by Uttar Pradess Jal Nigam ( UPJN) had failed to contain this crisis, as lack of power supply & poor maintenance became major issues with such mitigation plans. 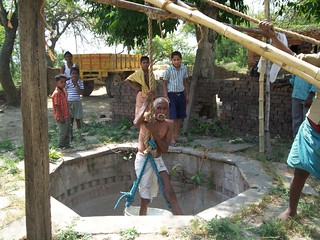 So Dilip came up with a viable solution. Instead of waiting for any of these big buck projects to reach him, he simply discarded the use of his hand pump and restored an existing well! He is now healthier, happier and arsenic-free.

Project Sankhiya, a model of arsenic mitigation, too adopts this strategy of reviving dug wells. UPJN & SWSM now plan to take this forward and cover the entire district of Ballia in the next two years. They plan to revive wells and the Panchayati Raj Institutions (PRI) will be responsible for the construction work & bacteriological cleaning of these dug wells in their villages. 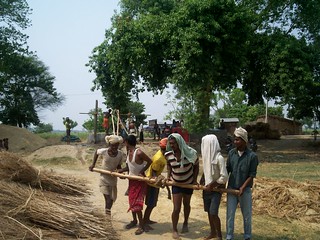 Today more and more villagers join hands to keep their water sources safe and hygienic. A 12 member, well cleaning team is led by a spirited 95 year 'young' enthusiast, Dhanik Ram Verma. He lowers himself down on ropes in each revived well for a personal inspection. Now old, disused and discarded wells are being cleaned and revived. Wells that were once an integral part of the village culture, are slowly regaining their lost value and importance.

For the community and the villages, these wells have become not only the focal point of a safe water source but also the start of a sparkling, arsenic free life.

May 24, 2022
Droughts reduce India's GDP by 5 percent in twenty years
News this fortnight

May 24, 2022
Pond water reuse from a circular economy perspective
Ponds became a storehouse of metal toxicity in the accumulated sludge: Study

May 24, 2022
Ministry weakens protections against coal mine expansion
Policy matters this fortnight